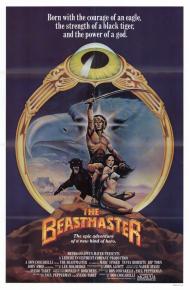 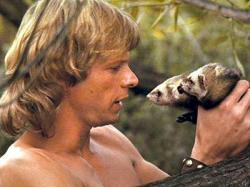 Marc Singer with Podo and Kodo in The Beastmaster.

There was a mini sword and sorcery craze in the early 1980s, highlighted by Conan the Barbarian (also released in 1982), and The Beastmaster was one of several  'B' fantasy movies released around that time. I was just 13 when it came out (My god, can it really be almost 30 years?), which was the exact right age to truly enjoy it. It wasn't a huge hit, but would become such a regular on cable television that it developed a minor cult following. HBO ran it so often that Johnny Carson once quipped that the station's call letters stood for "Hey, Beastmaster's on!" It would eventually spawn a couple of sequels (one in theaters and one made-for-television) and a short-lived television series, none of which are remembered as fondly as the original.

Remembered is a key phrase in regarding this movie fondly. The memory of enjoying it as a child is much more pleasant than actually rewatching it. Certainly the years have not been kind to it. I did still have fun watching it now, for the first time in decades, but for very different reasons than the first time. Where then I watched with an unironic serious earnestness, I now saw it as an unintentionally hilarious comedy and camp classic, completely reeking of the 1980s.

Dar is the son of King Zed, who is betrayed by his High Priest Maax (played by Rip Torn with an unfortunate prosthetic nose). Maax and his three witches (who all have beautiful bodies, but hag like faces) steal the unborn son of the King by magically transferring the fetus from his mother's womb to the uterus of a cow. Instead of killing Dar, this is instead the origin of his ability to communicate with animals.

Raised in a country village, Dar grows up without knowing his true identity. One day, with shades of Conan the Barbarian, Dar's village is wiped out, sending him on a quest for revenge. Along the way he picks up some animal friends, including a couple of scene-stealing ferrets named Podo and Kodo, a black tiger (whose makeup is so bad, you can see the regular stripes bleed through so often, it's a wonder they bothered with the makeup at all) and a hawk. He also meets up with a hot as hell (in a very 1980s way) Tanya Roberts, who, this being the 80s, enters topless and then spends the rest of it without pants.

The acting is all pretty horrible. The special effects and makeup are poor. The story is silly and the dialogue quite laughable. I have no proof, but I swear the costumes were picked up on the cheap from an S&M Outlet Mall, along with the extras.

Despite the general campy silliness and low quality production values, I still have to confess to rather enjoying myself while watching it. I mean, it's hard to hate a movie that has a ferret save the day by leaping onto the villain's back and driving him into a pit of fire.

Even though I was only 13, I can't believe how seriously I took this movie at the time. I was actually excited when the sequel came out in 1991, even though it turned out to be horrible. How could I not see how truly cheesy it was? 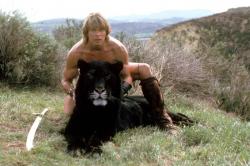 Marc Singer and Sultan the Tiger in The Beastmaster.

The early 1980s were the years during which Three Movie Buffs went through our adolescence. This incredibly dated movie loomed large in our collective imaginations. Eric and Scott drooled over Tanya Roberts while I secretly lusted after Marc Singer. With several topless women and most of the men running around in skimpy loin cloths, there is plenty of naked flesh on display to excite hormonal teenagers.

The plot is a rip off of Conan with a bit of Doctor Dolittle thrown in for good measure. Like Scott said, the memory of this movie is much greater than the reality of watching it again (for the first time in several decades). The special effects are bad with a capitol B. And I was dismayed to learn that the tiger (see photo) died a few years later due to health complications caused by the toxic black dye.

If you accept it for what it is this movie is still enjoyable. It's filled with weird-looking characters and there is enough action to keep an audience entertained. Although I guess it would be appreciated more by those of us old enough to have seen it the first time around. Like most camp classics it helps that the movie takes itself very seriously. Like Scott I remember taking it completely seriously as well. In my imagination I longed to have the Beastmaster's powers over animals. Today I can laugh at my earnest 15-year-old self.

It's not surprising that The Beastmaster has developed a cult following over the years. It is the kind of movie that evokes memories of carefree days. It may not attract that many younger viewers but it will remain a signature movie for Gen X'ers like Three Movie Buffs. Whenever I want I can pop in this wondrously cheesy flick and instantly recapture some of what it felt like to be 15 and have my whole life, and its endless possibilities, spread out before me. Ah, the power of the movies! 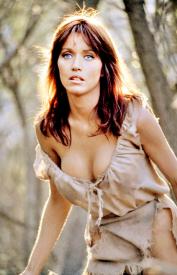 Tanya Roberts in The Beastmaster

I groaned when the large African American warrior and his ever present white boy companion dropped their robes in order to fight in their loin clothes. I laughed out loud when the man is strapped in a dungeon and forced to wear leather chaps and a matching mask. Costume designer Betty Pecha Madden should have left her fetishes in her closet.

The only good costume she designed was Tanya Roberts. Her outfit is so short that we occasionally get crotch shots, which have spurned online debates on whether or not she was wearing anything underneath. I am not being sexist. Everyone knows that in fantasy films, the men are rugged manly warriors and the women dress like Victoria Secret models. I learned that lesson from reading "Conan" comic books and watching One Million Years BC (1966). Okay, so maybe that is sexist but then again, they are called fantasy films after all.

Chiming in with my brothers, I enjoyed this movie when it first came out and also took it quite seriously. I was an avid Dungeons and Dragons player at the time and this type of film was of great interest to me. I stole plenty of ideas from it when I was Dungeon Master, except of course for the mens clothes.

I viewed it this time around much as my brothers. The acting is horrible and the special effects laughable. The dialogue is pathetic, “Dar, the gods have put that mark on you, and someday, you'll find out why. 'Til then, this mark will be your guide.”

The only way I could have truly enjoyed this film today, would have been if I had watched this movie with my brothers and we had spent the duration making fun of it. Such as when Dar and Kiri are in the temple and Dar has to climb a chain along a ceiling to avoid getting grabbed by arms reaching out for him. A bit later, Kiri slips away to a secret passage she knows is there to change clothes. Apparently she knows the Temple like the back of her hand as she used to live in it. Maybe she could have saved Dar some trouble by letting him in on that. Just saying.