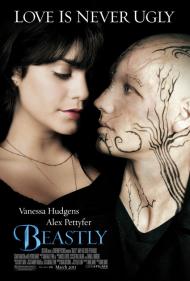 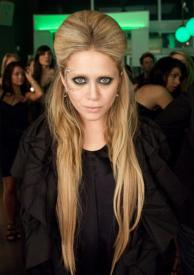 Beastly is a modern retelling of Beauty and the Beast.  It takes place in an upscale high school, in some large New York type metropolis.  The story translates well enough to contemporary times, but the lack of talent involved sinks it fairly quickly.

Kyle is the son of a famous and wealthy news anchor who rarely has time for him.  Kyle is running for class president because it will look good on his resume, not because he actually cares about anything.  Part of his speech is about being good looking, "My Dad always said how much people like you is directionally proportional to what you look like."

Lindy is likewise the child of a single parent.  Her father is an indebted drug addict.  She attends the same school as Kyle even though they clearly come from different neighborhoods.  They barely know each other.

Another classmate of theirs is Kendra, who just happens to have magical powers.  After putting up with Kyle's rude arrogance, she takes it upon herself to teach him a lesson.  She casts a spell that turns him ugly and tells him, "You have a year to make someone love you, or stay like this for ever."  After visiting several doctors and getting nowhere, Kyle's father hides him away in a penthouse apartment with a maid and a tutor.

Kyle sneaks out at night and spies on his old friends and discovers that none of them, including his girlfriend, actually like or miss him.  He runs into Lindy and he becomes smitten.  After saving her and her father from some dealers her dad owes money too, he invites her to stay with him in his high rise.

The cast is genuinely God awful.  Like his character, Alex Pettyfer had better be glad he won at genetics roulette, as his looks are all he has going for him.   Vanessa Hudgens is the most feeble actress since Jessica Alba.  We can at least forgive Alba as her hotness distracts us from her lack of talent.  Hudgens is merely pleasant looking, so we are forced to acknowledge her ineptness.  I guess Kyle's dad is on to something.

I normally like Neal Patrick Harris, but he plays the least convincing blind person in the history of film.  Whenever Kyle talks to him, Harris looks directly at him until the last few seconds of the conversation where he suddenly looks in a different location.

The only decent character and actress on screen is Mary-Kate Olsen as the witch.  Her best moment comes when Kyle tries to charm her and she interrupts him by asking if, "...bullshit is one word or two?"  It should not be surprising that she is the stand out as she has been acting since before the two leads were even born.

Beastly is a watchable film if you have low, and I mean low, expectations.  For anyone else, break out Disney's far superior animated masterpiece, Beauty and the Beast.