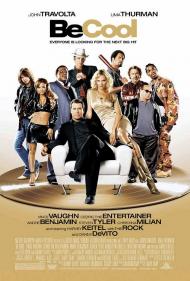 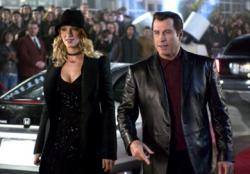 Uma Thurman and John Travolta in Be Cool.

Without a doubt, Chili Palmer is one of the coolest movie characters to ever grace the screen. John Travolta, whom I've never been a huge fan of, perfectly embodies this character. While both Get Shorty and Be Cool are entertaining films in their own unique way, the one and best constant through them both, is this ultra-cool, always dressed in black, always in command, central character.

In Get Shorty, Chili Palmer was a hitman sent to Los Angeles to retrieve some money owed to Chili's boss. Liking the lay of the land, Chili decided to change careers and get into the movie business, which he did with some success. Now, in Be Cool, Chili has decided to swap the movie business for a chance to break into the music industry. His chance comes when he meets a musical ingénue and a friend, record company owner Tommy Athens, is murdered. Partnering with his friend's widow (Uma Thurman), Chili moves to become the manager of his new young singer. However, nothing comes easy in a movie based on an Elmore Leonard book and first Chili must deal with the Russian Mafia, an angry Record producer (Cedric the Entertainer) and a rival record manager (Harvey Keital).

The biggest difference between Be Cool and its predecessor is in its direction. The Barry Sonnenfeld original was a little darker and more tautly paced. Here the jokes are broader and the film doesn't carry the same dark noirish feel to it. This doesn't diminish the humor, just alters it. It does hurt the story though, which never pulls itself together in quite the same way as the original did.

Like the original though, this one features an all-star cast, some of whom nearly steal the movie. The Rock is particularly funny as the gay bodyguard who wants to break into acting. To convince Chili of his talent, he performs a 'monologue' from the cheerleading movie, Bring it On. Also funny, but overused, is Vince Vaughn as the white boy pretending he's black, music manager.

Chili, as always, remains at the center of the story. Supremely cool and always in control of the situation, he remains unfazed and totally unimpressed by all of the threats and activity going on around him. Without a doubt, this is my favorite role of any in Travolta's career. Over fifty, and slightly overweight compared to your average movie star, he still manages to embody the essence of cool in his portrayal of Chili.

No, Be Cool is not as good as Get Shorty, but it is funny and fun to watch. 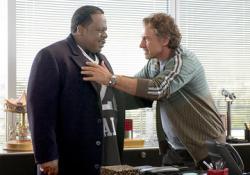 Cedric the Entertainer and Harvey Keitel in Be Cool.

I pretty much agree with everything Scott wrote, but (like Meet the Fockers over Meet the Parents) I enjoyed Be Cool more than Get Shorty. Unlike Scott I have always been a big Travolta fan. He is a great movie star for the ages and Chili Palmer is one of his best roles. He's cool as a cucumber with nerves of steel.

The supporting cast really outshines the main character however. Cedric the Entertainer gets some great lines. His college educated record producer who acts gangsta in order to have street credibility is hilarious. When one of the Russian mobsters calls him the 'N' word he rhetorically asks, “Why must it always come down to racial epithets?" Rapper André 3000 of Outkast is also amusing as Dabu, Cedric's itchy fingered trigger man.

I laughed at Vince Vaughn's wannabe-black, white-boy routine. Still Scott's right that The Rock steals the show. His gay bodyguard is a first in a Hollywood movie. Sure on the one hand he's a flamboyant queen but he is also a gun toting tough guy. I would be interested in seeing a movie all about Elliot Wilhelm and what happens in his quest to become an actor.

Be Cool is a good time at the movies. 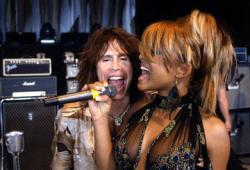 Steven Tyler and Christina Milian in Be Cool.

As Scott and Patrick wrote, Travolta does some of his best work in this role. However, his Chili Palmer is so cool that you never fear for him or anyone he likes. Many times he has guns pointed at him, but the movie is directed in such a light manner that there is never any tension to speak of, so half of the supporting characters become superfluous.

One of the best parts of the film for me was the jokes within a joke. Such lines as when Palmer says, "I hate sequels." Or when Aerosmith lead singer , Steven Tyler, says, "I'm not one of those singers who appears in movies." A film named Get Leo is referred to in the movie which is obviously a reference to Get Shorty.

Be Cool has one of the best casts of any movie I have seen in a long time. Vince Vaughn continues to impress me. He and The Rock stretch their acting muscles and prove they have better range than they have shown to this point in there careers. The one weak link is Christina Milian. Sure, she is cute and adequate, but if you want Beyonce then hire Beyonce.