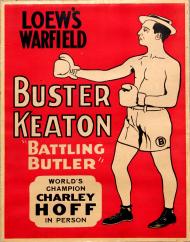 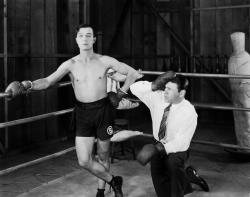 Buster Keaton directed and wrote, at least part of, most of his films.  Battling Butler is an exception as it is based on a play.  He likely still made some changes to this one.  I doubt the many out door antics and car driving in the country scenes could have been done on a stage.

Alfred Butler is a spoiled rich young man, whose valet does every little thing for him.  His father sends him on a camping trip, to hunt and fish and hopefully make a man of him.   He proves to be completely inept at all things outdoors.  His valet goes along and continues to serve him.  Alfred's tent has a bath, a bed and basically all of the comforts of home.  He even gets the newspaper delivered to their campsite where they read about a champion boxer with the same name.

Alfred meets a "mountain girl" and falls in love.  Her father and brother think him unworthy as he is a weakling.   The valet tells them that Alfred is actually Alfred "Battling" Butler, the champion boxer. They buy the story, and Alfred and valet head off to watch the next boxing match, letting the country bumpkins think he is fighting in it.

They return to the small town after the fight to a grand reception.  Alfred finds himself getting married to the girl.  He feels guilty for the ruse but keeps it going.  They head off to the real Butler boxing camp where Alfred pretends to work out.  My favorite joke is when he meets the real boxer's wife by the ring where her husband is sparring.  He asks her about her shoe he helped her with earlier, "How's your heel?"  She responds, "He's alright." looking at her husband.

This is not my favorite Keaton film.  There are no great scenes of slapstick that stick with me, but it has some things to offer.  The moment Alfred "becomes a man" is one of "the great stone face's" best acting scenes.  At one point, the real boxer thinks his wife and Keaton are flirting with each other and gets mad.  The next scene shows her sitting at a table reading a magazine with a black eye.  It is meant to be funny, and perhaps it was, then.  How times have changed. 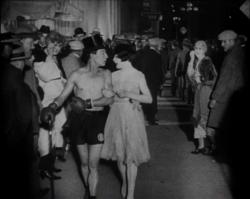 I agree, this isn't Keaton's best work, although it still manages to entertain. I enjoyed the first half more. The scenes of the wealthy, pampered Alfred roughing it are quite amusing. Snitz Edwards was a funny looking little gnome of a man and he is very good as the loyal valet. Sally O'Neil is cute and sweet as the love interest, and Francis McDonald is effective as the real pugilist Keaton impersonates.

The scene Eric mentioned where the real Battling Butler's wife is shown with a black eye is still funny today. Not because it is condoning domestic abuse, but this is the villain of the movie after all and he is a boxer after all. It is an amusing sight gag that also shocks the audience while telling them just what kind of man Battling Butler is.

Once Keaton arrives at the training camp the story sort of runs out of steam. At least until the climactic fist fight between the two Butlers, in which Keaton gives good comeuppance. The film's final shot is its best sight gag (see photo).

I always find outdoor scenes in silent movies to be fascinating. Dirt roads and empty fields stretching in the distance as far as the eye can see are common sights. Keaton shot in both Bakersfield and on the banks of the Kern River. I'll bet those locations are unrecognizable today.

Battling Butler lacks any really memorable slapstick gags or daredevil stunts. Nevertheless it was a big hit with audiences of the day, far out-grossing Keaton's other feature film from 1926, The General, which, ironically, is now considered to be one of his greatest masterpieces. In Keaton's prolific and awe inspiring body of work, Battling Butler is somewhere in the middle of the pack. 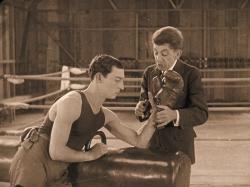 Battling Butler may not be a great work of art, but I think both of my brothers are rather harsh on this very amusing little feature. Granted it doesn't contain the ingenious set pieces that were so typical in a Keaton film, but it still packs a lot of charm. Keaton was much more than just a stuntman and he could provoke laughs without needing to resort to outrageous, death defying stunts, even though he did those kinds of stunts better than anyone else. And even in this film, without that sort of stunt, he still manages to use his entire body to aid his comedy.

Given that the original play this film was based on was an British musical where all of the boxing matches took place off-stage, I'd say quite a bit was changed in the transition to the screen. I'm also sure, as Eric suggested, that the car scenes were never in the original version either. But then, what film of Keaton's, no matter what the source, wasn't changed once he put his indelible mark upon it.

Although I agree with Patrick that the first half of the film is the funniest, the latter half is not without plenty of humor. The final gag of Keaton walking down the street in his top hat, cane and boxing shorts is a funny one, but the scenes in the camp are the funniest. Seeing how this spoiled millionaire roughs it with his brass bed inside a tent larger than a New York City studio apartment, with ice and newspaper delivery, and a servant to attend to his every need, including flicking the ash from his cigarette, is one of the funniest sequences and 5 years earlier could have been a Keaton short on its own. Watching the hapless, diminutive millionaire train to become a boxer is also quite funny. His attempts to get in and out of the boxing ring while getting tangled up in the ropes is one of the most quintessentially Keaton moments. One unintentionally funny scene comes when the trainer takes Keaton and his valet for a run and they use the sports wear of the time, which includes a heavy wool sweater, a flat cap and slacks.

Unlike much of Keaton's early work, Battling Butler is available in a pristine print. In fact, it's one of the cleanest prints of any silent film out there. It's been preserved so well that it's hard to believe you're watching something almost 90 years old. We've spoken of old movies as windows into the past in other reviews on this site, well rarely has that window ever been so clean. Costume and set designers looking to make films set in the 1920s should and probably do watch films of this kind for inspiration. In a lower quality print you might not be able to even see the black eye my brothers refer to, where here it's easy to see. The print is so sharp that you can even notice how Keaton's and other's complexion lightens or darkens from scene to scene as the amount of makeup they were wearing must have varied.

If there's a real weakness to the film it is in the romance. Keaton meets the mountain girl and falls in love with her so quickly that there's never really time for a chemistry to develop between them. Even though the romantic leading man was never Keaton's strong suit, he was able to develop stronger love stories in other films.

So maybe Battling Butler isn't art, that doesn't mean it's not an entertaining and funny film.