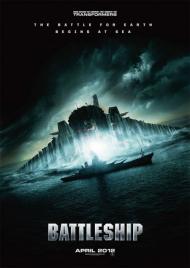 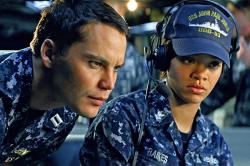 Taylor Kitsch and Rihanna in Battleship.

I never thought I'd be saying this about this movie, but I enjoyed it. Sure, part of it was because I went into it with absolutely zero expectations, but it wasn't just not as bad as I thought it would be, it was also kind of fun in a big, loud, brainless summer blockbuster kind of way. It's certainly better than the Transformers movies to which at least the alien ships here bear a passing resemblance.

Despite the CGI and special effects, there's something of an old fashioned feel about Battleship. Maybe it's because the game it's based on has been around since 1931 or maybe it's because you just don't see movies made about the Navy these days and so I was reminded of one of those old World War II navy movies. Hell, so long as I'm comparing this to similar movies, I'll also say that it's a hell of a lot better than 2001's Pearl Harbor, which also featured the Navy and took place around Hawaii.

As you'd expect from a movie based on a board game, the plot is fairly simple. During a series of Naval war games in the Pacific, an alien invasion force lands in the ocean around Oahu. It followed a signal that mankind had been transmitting from a series of satellite dishes based on the island. The aliens extend a force field around the islands and the surrounding ocean, trapping three naval ships within the boundary. Can the Navy defeat the aliens before they're able to call for reinforcements?

Part of the reason I enjoyed the movie is that despite the spaceships, the naval battles and the special effects, the focus always remains on the human characters. Sure, they're mostly made up of stereotypes, but we're given enough characterization to actually care what happens to them. And while obviously no one is going to win any kind of award for their performance here, the cast--including Rihanna--avoids embarrassment and that's despite some less than stellar dialogue.

Taylor Kitsch, in the lead role, certainly comes off better here than he did in the abysmal John Carter. Brooklyn Decker, who play's Kitsch's girlfriend in the film, is certainly having a good weekend. She not only appeared in this movie, but also What to Expect When You're Expecting, which also opened in the top ten. Liam Neeson's part is smaller than the previews would have you believe and he's really only required to stand around at attention and look authoritative.

I did wonder--given that the plot is about aliens--if the plot would make any reference to the original game. The filmmakers did manage to sneak in a couple of references. One small allusion is that some of the aliens bombs are shaped like the pegs used in the game. The most blatant reference is when the navy destroyer is trying to track the alien ship, they call up a grid on the computer screen with points on it that represent the location of buoys. Since they can't use radar or any other sophisticated means of locking onto the alien ship, the captain calls out the coordinates based on the grid where he wants the gunner to fire, even calling out, "It's a hit!"

There are some plot holes. For instance I find it hard to believe that an alien race, capable of traveling faster than the speed of light would really only be able to contact their home planet from just one of their ships. And why don't the aliens destroy all three of the navy ships when they have a chance, instead of letting them get away? It's best not to think too hard about those things while you're watching it.

Okay, so it's not the greatest movie ever made, but so far as big, dumb summer blockbusters go, I've definitely seen worse. 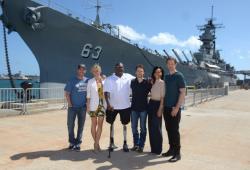 There are definitely some plot holes. I find it hard to believe that the USS Missouri, a permanently docked floating museum, could be underway in such little time.  As it is a museum being visited by civilians on a regular basis, it would not have any munitions on board.  None is ever shown being brought onboard, yet it seems to have all the ammo it needs for the battle.

Scott, the aliens do not destroy all three of the navy ships when they have a chance because they are shown as only killing humans when threatened, or as collateral damage.  As soon as the battleship rotates its gun turrets away from the alien ship, the aliens no longer register them as a threat.  Yeah, it is a weak excuse, but then again, these aliens were dumb enough to fly their communication ship into an orbiting satellite.

This film makes it seem as if four people are running the entire ship.  We always see plenty of sailors in the background but whenever Kitsch turns a corner he runs into Rihanna, John Tui or Jesse Plemons.  Whenever he needs something done, these three show up.  I guess we know who his friends are.

The editing should have been tighter.  It takes far to long to get going.  The first fifteen minutes are pointless.  We do not need to see how Hopper met his girlfriend or how he joined the navy.  The film could have started with the ships at sea starting the war games.  Although we would miss seeing Brooklyn Decker in that tank top and shorts.

The special effects and action are exciting enough but it never drew me completely in.  This film should have taken place during World War II when we had real sea battles.  As Hasbro is trying to appeal to young consumers, it set the film in modern times and added aliens.  Had it stayed with history it would have created a greater emotional impact.  The producers understood this with the inclusion of the USS Missouri, which was commissioned in 1944 and was the formal site of Japans surrender.  Here it is used by both American and Japanese sailors, in a joint effort to battle the aliens.

As I served on board a U.S. Naval vessel, I have a place in my heart for movies about the U.S. Navy.  Battleship should have spent more time with the sailors and less on the whole engagement issue.  The running commentary of Hopper being a nervous slacker does not make him more likable or the story any better. The plot does not get interesting until it gets to sea and once it does there are enough things going on to keep you watching, but it will not stay with you very long afterwards.