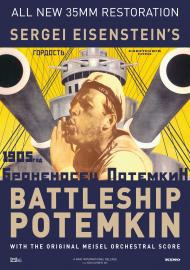 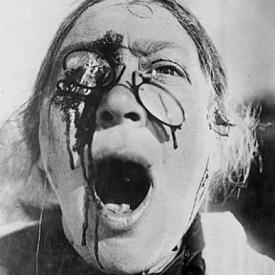 N. Poltavseva in one of the most iconic closeups of all time in Battleship Potemkin.

Battleship Potemkin is one of the most influential movies -silent or talkie- of all time and quite possibly the most powerful example of movie propaganda ever filmed. Directed by Sergei Eisenstein it tells of the (factual) mutiny that occurred aboard the titular Russian battleship in 1905 and the resulting (fictionalized) massacre on the Odessa steps by the Tsar's soldiers.

This is by far the movie's most famous sequence. Even if you have never seen Battleship Potemkin you have most likely seen images from this scene, which include a baby in a carriage rolling precariously down the steps while civilians flee in panic, heedlessly trampling their fellow citizens being gunned down in cold blood. There is a close-up of a woman wearing glasses who gets injured in her face that has become iconic (see photo). This movie has directly led to the belief this massacre actually happened when in fact it did not. Such is the power of the movies when used successfully as propaganda.

This 69 minute film is broken into five short parts. “Men and Worms” begins the story. It tells of how the sailors aboard the ship are being fed rotten meat swarming with maggots. The ship's doctor callously tells the men to wash the meat off with brine to make it fit for eating. The second section is called “Drama on the Deck” and it deals with the actual mutiny. The man responsible for setting off the mutiny, a Bolshevik sailor named Vakulinchuk, is the first to be murdered. It is excitingly filmed.

The third section is called, “A Dead Man Calls for Justice”. Vakulinchuk's body is taken ashore, where a large crowd has gathered to mourn him. Next comes the fourth, and by far most celebrated, section entitled, “The Odessa Staircase”. While the Tsar's soldiers in their white summer tunics march rhythmically down the steps towards the unarmed populace, mounted Cossacks arrive at the foot of the steps to ensure the crowd cannot easily disperse and flee to safety. The resulting massacre is brutally depicted. It remains one of the greatest sequences ever committed to film.

The final part is called, “The Rendez-Vous with a Squadron” and it details how the Tsar's navy is sent out to recapture the Potemkin. The squadron sent out first declines to engage. As they lower their guns the sailors aboard the Potemkin cheer as they realize the revolution has spread.

Eisenstein's camera work and editing were very much ahead of their time and hugely influential to subsequent generations of filmmakers. He makes great use of the montage technique to tell his simple story. This is especially noticeable during the massacre on those famous sandstone steps. Unforgettable images rapidly flash before your eyes in a manner not previously seen in films. Battleship Potemkin has made dozens of Best Movies of All Time lists over the decades and it remains as powerful and unique a cinematic experience today as when it first came out nearly a century ago. 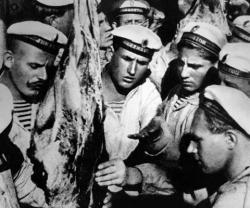 Patrick wrote that, "Battleship Potemkin has made dozens of Best Movies of All Time lists." That may be true, but that piece of information demonstrates just how little acting plays into a film being considered great. Most of the sailors onboard are clearly amateurs. In fact, a great amount of the cast were actual sailors and residents of the town of Odessa.

Where this film excels is in the direction. When the boat bearing the body of the dead sailor comes into port, the black and white cinematography makes the misty harbor look cold and a bit scary. The mass of people coming down the stairs and marching through town to the pier to see the body is also remarkable. One of my favorite moments is when a petty officer is walking below decks among the sleeping sailors in hammocks and bumps into one. He finds a young sailor to blame and slaps him on his bare back as he sleeps, causing the sailor to cry into his pillow. What exactly is he doing wandering around down there watching the shirtless men sleeping? Was Eisenstien suggesting other things were going on?

The scene of the massacre on the steps is not so impressively filmed as it is simply brutal. A mother carries her wounded child to the soldiers shooting the citizens, only to get a bullet as an answer to her plea. The most famous moment is the one that Patrick mentioned, that of the baby carriage rolling down the stairs.

The Untouchables (1987) would steal the idea of a baby carriage going down some stairs during a shoot out. It even features a sailor. As Patrick wrote, this film was quite influential. Every film made since about a mutiny owes some debt to Battleship Potemkin. At one point, one of the revolutionary says, "Tomorrow is ours." In Cabaret (1972) some Hitler youths sing, "Tomorrow belongs to me." One of my all time favorite references to this film is from The Way we Were (1974), when Robert Redford says to Barbra Streisand about a critic, "The only picture she hasn't knocked is Potemkin." 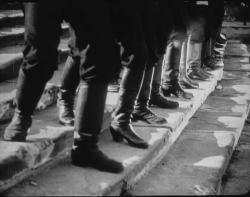 The soldiers march down the Odessa Staircase in Battleship Potemkin.

Different movies are considered great for different reasons. Eric pointed out that this one doesn't contain great acting and he's correct, but that's because this movie isn't about characters or individuals and so acting doesn't play into it as much as it would in other films. In fact, some of the acting here is downright bad and completely melodramatic, even in the otherwise excellently filmed Odessa Staircase scene. The mother of the baby in the carriage, for example, acts her death scene in a very over the top manner.

The real strength of this movie is the way it's edited together. Today we expect movies to be filled with short, quick cut scenes, but this technique was revolutionary at the time. Eisenstein uses these montage of images to create the moment and the emotion. This is most obvious in the Odessa Staircase scene, but also later on board the ship as it races to meet the fleet. This latter scene is interesting because it's filmed almost like a documentary, but it's edited like a thriller.

This combination of genres is what makes the film such an effective piece of propaganda. Nazi propaganda minister Joseph Goebbels once said about this film, that it was "a marvelous film without equal in the cinema ... anyone who had no firm political conviction could become a Bolshevik after seeing the film". Eisenstein combines true events and the dramatization of the slaughter on the steps to gain audiences sympathy with the Bolsheviks, which ironically was a group the mutineers didn't even support at the time of their revolt. This was such a successful piece of propaganda that many countries have banned it over the years, including its home country of the USSR when Stalin decided that he didn't want to incite revolution again in his country.

In 2010 Roger Ebert wrote that, "Battleship Potemkin is no longer considered the greatest film ever made, but it is obligatory for anyone interested in film history." I completely agree. It has been paid tribute to and spoofed in so many other films that it may have lost some of its freshness, but you cannot deny its influence on cinema.