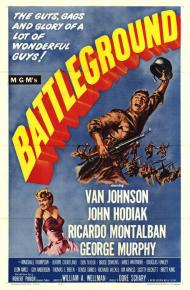 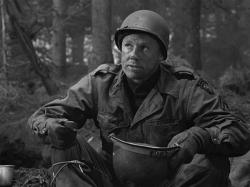 Van Johnson leads a cast of actors who portray hard bitten service men who fight the enemy and the elements as they try to survive. Through the eyes of a new man in the platoon, Layton, we see him slowly acclimate himself into the close knit world of these men. At the beginning of the movie he is nervous and unsure of himself. By the end of the movie he is as hardened and weary as everyone else. His most poignant scene is when he discovers that a friend was killed and no one remembered what his name was. Later, Layton is in a foxhole with another soldier as they are being shelled. Through the noise and smoke, Layton yells to the other man "My name is Layton."

Based on true events, Battleground pays tribute to its subject while never condescending to it. No one is a super-soldier who does any ridiculous stunts. Every man is scared and wants to go home but they all do their duty. A scene near the end of the movie gets a bit political. A Lutheran pastor gives religious service to the men about whether the war was worth it or not. Of course he says it is. It is a scene that will not likely be seen in a new movie.

Battleground has a good pace and plenty of action, but what makes it great is its level of tension. Many soldiers die. My favorite scene is when three soldiers go out on patrol and run into German soldiers disguised as Americans. It begins playful as one soldier is enjoying the first snow of his life. It then gets tense as they meet some soldiers and realize they are German. This leads to a fight, some running and one soldier being left behind. 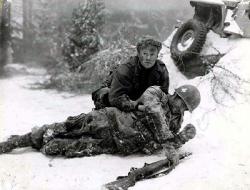 Battleground paints a realistic portrait of soldiers on the front lines during wartime. While unquestionably heroic, these are real men with real human weaknesses. There are no over-the-top, John Wayne type acts of bravery. At one time or another nearly every man in the 3rd platoon infantry regiment of the 101st Airborne Division considers slacking off, seeking intentionally inflicted medical leave, or simply fleeing from danger as they face extremely harsh conditions in the wintry Belgian woods.

William Wellman directs with his usual no nonsense approach to filmmaking. He keeps the focus intimate and the story personal. After a while you will almost begin to feel the cold, uncomfortable conditions under which these men struggle to dig foxholes and await the approaching German army. After enduring the elements and the uncertainty of not knowing where the enemy is or when they may attack, battle breaks out about halfway through the picture. It may not boast the bloody carnage of modern war movies but these scenes are nonetheless tense and exciting.

The cast is terrific down to the last man. Van Johnson is the nominal lead of the picture, he's a charmer with the ladies but also a damn good soldier (not to mention resourceful, as he tries to cook eggs in his helmet) but Battleground is a true ensemble production. Each man has a distinct personality and we get to know them well.

James Whitmore is perfect as the gruff old sergeant struggling through the snow with frostbitten feet that get worse as the story progresses. Ricardo Montalban plays the private (Eric mentioned) who has never seen snow up close, only on the distant mountains from his home in Los Angeles. Marshall Thompson plays Layton, the new guy. As my brother wrote, his character undergoes the biggest change over the course of the movie. His journey from green recruit to hardened veteran is completely believable.

Some modern viewers may scoff at the old-fashioned quality of this movie. Without the crutches of gore and adult language, Battleground still manages to convincingly conjure up the hell of war in extremely realistic terms. It was a huge hit both commercially and critically for MGM back in 1949 and it remains a timeless look at one particular battleground.