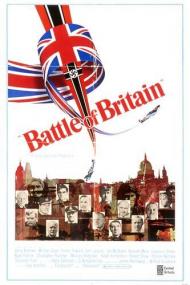 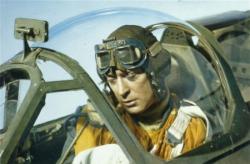 Michael Caine in Battle of Britain.

By 1969 the gung ho, patriotic war movie was heading out of fashion. M*A*S*H* and Catch 22, two war movies more in tune with the era of Vietnam war protests, would be released within a year of this one and from then on nearly all war movies would come with a sense of irony attached. Battle of Britain however, is an old school World War II movie featuring a large cast of recognizable stars that wears its patriotism proudly on its sleeve.

For those who don't know (and I rather cynically suspect that number is much higher than it used to be), following the fall of France and before the United States and the Soviet Union entered the war, Great Britain stood virtually alone against Nazi Germany. The Battle of Britain, so named by Churchill who proclaimed following the evacuation of Dunkirk that “The Battle of France is over. I expect that the Battle of Britain is about to begin.”, was fought in the air between the German Luftwaffe and the Royal Air Force. Hitler's aim was to soften up Britain to the point where she either negotiated some form of surrender or weaken her to the point where an invasion, the so-called “Operation Sea Lion”, would be possible. The plot of this movie tells the story of that summer and autumn in 1940 when the balance of the war hung in the air over England.

The cast is filled with British stars and recognizable character actors. Laurence Olivier plays Air Marshal Hugh Dowding, the commander of Fighter Command. Ralph Richardson is the British ambassador to Switzerland. Michael Caine, Christopher Plummer and Robert Shaw all play Squadron Leaders. Those are some of the biggest names in the cast, but you'll know the faces, if not all the names, of most of the rest of the cast. Not to give away any spoilers, but be warned that being a famous face is no guarantee for survival until the end of the movie.

As you'd probably expect, much of the movie takes place in the air. There are plenty of dogfights and aerial battles. A large portion of the budget went into filming these scenes and it shows. So many airplanes were used for the filming that at one point it was estimated that they were operating the 35th largest air force in the world. Nowadays they'd make do with CGI planes, but here they are the real thing.

So much money was spent on the planes and air battles that it's obvious the producers wanted to get their money's worth, which brings up the only complaint that I have about the movie. While the dogfights are well filmed and tense, there are so many of them that eventually they start to run together and seem awfully similar. The action is exciting, but it's the personalities of the people involved that make the story interesting and relatable. I wish that more time could have been spent with some of the characters, particularly given the terrific cast involved.

Like the cast, the production team was also British. Harry Saltzman, one half of the James Bond producing team, produced the film and he brought along several of his team from the Bond films. Guy Hamilton who directed 4 Bonds, including Goldfinger, directs this movie as well.

Of the millions of Allied casualties that resulted from World War II, less than one thousand of them died during the Battle of Britain. And yet that small band of chaps in their Spitfires and Hurricanes helped to alter the course of the war. This movie is a fitting tribute to them. As Winston Churchill so eloquently put it, “Never in the field of human conflict has so much been owed by so many to so few.” 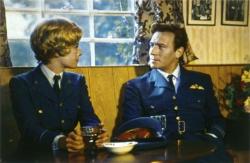 Susannah York and Christopher Plummer in Battle of Britain

As Scott wrote, Battle of Britain is an old fashion war film. It is told in a manner once popular in war films, where we are shown the participants on both sides of the conflict. As in The Longest Day (1962), we see the British talking, laughing and belly aching about their situations and then the Germans doing pretty much the same. It provides us with a view of the men from both sides and reminds us that they are merely pawns in a deadly game that their politicians are playing.

For me that is one of the film's highlights. Early on the German pilots are shown as loud and arrogant. They yuck it up over drinks like a bunch of fraternity boys on vacation.

The British, on the other hand, seem rightfully on edge, and are uncomfortable displaying any type of emotion. When the British man, whose job is to activate the air raid siren, gets word from look outs of the approaching German planes, he reacts without urgency. He gently puts down the phone and casually walks over to the siren.

When Christopher Plummer meets with his wife, Susannah York, in a pub, you can tell he wants to start a row about her joining the military but he refrains. These people are so repressed that her way of telling him she wants sex is by informing him that she has made hotel reservations, wink wink nudge nudge. His reaction is so small that he barely seems interested. However, after the Germans attack, they both find their voice.

After seeing wounded and dead, York nervously attempts to light her cigarette and gets yelled at because of broken gas pipes in the area, even though there are plenty of different fires burning all around her. She yells back and then starts giving orders. After landing from an aerial fight, Plummer snaps at a rookie pilot, “Never let me catch you doing a victory roll over my airfield again. Understood?”

To me, the theme of this film is England reaching down into its pants and finding it has balls. Note the scene early on where the British suit stands up to the German suit. The British man is defiant but clearly shaking in his shoes.

Whenever we have a scene featuring the Germans we have classical music playing and everything looks new and powerful. The Germans seem particularly threatening and pretty damn cool looking in their dark uniforms. The Nazis are extremely confidant throughout most of the film but lose a bit of their swagger by the end. They may have power on their side but it is no match for the British stiff upper lip.

Scott mentioned the cast, and it is a bit interesting in that my teenage sons know some of them from superhero films. They both know Michael Caine as Alfred from Christopher Nolan’s Batman films. My youngest is a huge Superman fan and did not recognize his mother from the Christopher Reeves movie.

Battle of Britain is a good film for the story it tells but it is not a very compelling one. It should have told the story of the Battle of Britain from a single perspective, or at the most from Plummer’s and York’s. That way we could have felt a greater emotional connection to the two of them surviving the war, seeing the Nazi defeat and moving to the country to have scads of emotionally repressed snotty sounding British children. 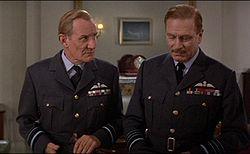 Trevor Howard and Laurence Olivier in Battle of Britain.

While a solid production that boasts some pretty spectacular aerial shots featuring hundreds of WWII aircraft flying over those famous White Cliffs of Dover, and a fairly accurate historical representation of the eponymous battle, this film is a bit dry for my tastes. It never really moved me emotionally or allowed me to feel engaged with the characters as much as I had hoped. With typical British reserve it seems more documentary than movie.

With one exception the big name stars are wasted in parts that nearly anyone else could have played. Most of them get only a handful of lines. Michael Caine and Christopher Plummer (both of whom are still acting today in their 80s) give solid turns but neither one gets a chance to really stand out in this large ensemble cast. Trevor Howard makes good use of his distinguished speaking voice but looks a bit long in the tooth for the role of an active soldier. In fact a double was used in the scene where he first visits Squadron Leader Harvey (Plummer) and jumps out of the Hurricane.

The exception being Sir Laurence Olivier as Sir Hugh Dowding (he was visited on the set by the real Lord Dowding, at the time an old man confined to a wheelchair). Olivier not only possessed the required gravitas for the role but he also brings a much needed sense of drama to the proceedings. He gets the most memorable spoken line when he's on the phone discussing casualty figures that have been publicly disputed by the Germans. At one point he clears his throat and says in an implacable voice, “I'm not very interested in propaganda. If we're right, they'll give up. If we are wrong, they'll be in London in a week!”

History tells us the Germans did give up their plans for Operation Sea Lion, although they did continue their bombing “Blitz” of London and other British cities until May of 1941. Some historians have pointed out that Britain's superior navy would have made an attack by sea across the English Channel a risky venture for the Germans. At any rate the men and women to whom this movie pays tribute saved thousands of Allied lives as well as the lives of many innocent British civilians with their heroic actions during those fateful months of August and September, 1940.