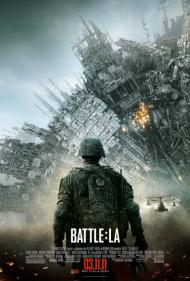 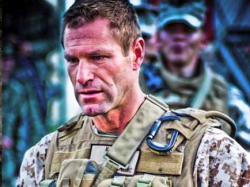 Battle: Los Angeles has a been there, done that look to it.  I cannot count the number of alien invasion/potential end of the world movies made in the last two decades.  A group of stereotypical U.S. Marines do battle with an alien invasion in Los Angeles.  Despite all of the cliches and retread, it remained entertaining.

Staff Sargeant Michael Nantz is about to retire from the U.S. Marines when an alien invasion throws a wrench into that plan.  Alien ships have crashed into oceans all over the world and are coming ashore, killing everyone in their path.  Nantz, and a rookie Lt, lead a group of marines into a battle ridden, alien infested area of Los Angeles to get some civilians to safety as they have plans to bomb the entire area. To enjoy this movie you must get past the fact that this makes no sense.  The densely populated area obviously has many people still alive in hiding, but for some reason these people at the police station (two adults and three kids) are somehow worth risking marine's lives for.

So aliens are attacking and someone in charge believes he can bomb the shit out of them and kill them, but wants to wait three hours so a couple of people may be saved first?  Saving children sounds noble and makes good PR but come on!  Many of the Marines die in the effort and waiting three hours to drop the bombs proves to be a huge mistake as it allows the aliens to advance.

Eckhart leads a cast of up and coming actors who are mostly ten years too old for the part.  In real life, the average U.S. Marine is 19, other than Lucas Till, most of these guys were 29 when they made this.  Scott always writes about how he is bothered by twenty somethings playing high schoolers.  I am bothered by casting older guys to play soldiers.  Most of the guys who fight in our armed forces on the front lines are kids just out of school.  By casting thirty year olds you lesson the Marines vulnerability and blind heroism.

The other interesting casting, or actually the lack there of, is Michele Rodriguez as a soldier.  The tough dark haired chick alien fighting soldier has become a cliche.  Rodrgiuez played one before in Avatar (2009).  Alice Braga played one in Predators (2010).  Sanaa Lathan did it in Alien vs. Predator (2004).  It all started with Jenette Goldstein in Aliens (1986).  Apparently blondes do not have it in them to kick alien ass.

The special effects are good and the action keeps you watching, even if you sometimes question what the marines do.  Halfway  through the film, it stops dead.  One of the soldiers has issues with Nantz because his brother had previously died under his command.  Aliens are all around.  Countless people have just died, including many of his comrades, and this soldier still has to have the conversation that people die in war.  Nantz wins his loyalty by reciting the name, rank and serial number of each guy who has died with him.  I am not sure how that is supposed to be comforting?  Remembering a person by his rank and # is dehumanizing.

Battle: Los Angeles is actually a very pro-U.S. Marine movie.  The opening of the film gives each marine one characteristic to distinguish them apart.  One is engaged.  One is about to become a dad.  One is a red neck.  One is a virgin.  One is from Africa.  Eckhart is in the John Wayne role.  This is best exemplified by this line to motivate his men, "Lets show these bastards who the fuck their dealing with!"  Yeah it is over-the-top, but the movie is hell bent on showing these guys as dedicated tough sonsabitches, punctuated by an ending that suggests a possible sequel.