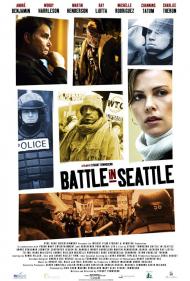 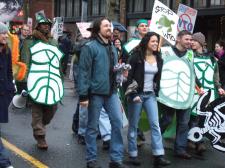 The protestors are supposed to be the heroes, but I found them more annoying than heroic.

Battle in Seattle is a retelling of the riots that broke out in the title city in 1999 during a meeting of the World Trade Organization. It is also actor Stuart Townsend's feature-film writing and directing debut. Featuring some well-filmed and tense riot scenes, the movie ultimately fails because of cliched, one-dimensional characters and hackneyed writing. It seems that Townsend is a better director than a writer.

At the start, the movie seems to be trying to show four sides to the this story. There's the city government led by Mayor Tobin (Liotta), who woefully underestimated the size of the protests and then failed to act fast enough to deal with them. Under him are police officers played by Woody Harrelson and Tatum Channing. On the opposite side are the protestors led by Jay (Martin Henderson) who brings along a few recognizable faces with him. Then you have the delegates of the WTO who are clearly cast as the villains of the piece, because you know, Capitalism is bad in Hollywood movies (although Hollywood bigshots certainly doesn't mind being Capitalists themselves). And finally you have the real victims, the innocent bystanders who are caught in the middle of the fight raging between the other three, as exemplified by Ella (Theron), Harrelson's pregnant wife, and Dr. Maric, a member of Doctor's Without Borders who has come to the WTO for aid, but whose cause is lost in the chaos that follows.

The movie's biggest problem is simply that instead of real people it is populated with causes. Each of the characters is clearly there to represent one viewpoint. Harrelson's police officer is one of the few convincing characters in the movie, despite his part being steeped in melodrama. At least he seems human. His and his wife Ella's storyline is the only one that evokes real emotion.

Despite starting the movie somewhat vaguely neutral, the story quickly moves to the side of the protestors. It's just too bad that they are all so annoying that you practically end up feeling sorry for the WTO. The end of the movie even tries to play the entire event as a victory for the protestors, but just what they accomplished is beyond me. But then, just what the fuck they thought they were GOING to accomplish is beyond me, except perhaps for assuaging some middle-class guilt complex. The only real results of their actions is the destruction of public property and a huge financial hit to the local economy.

The best parts of the movie are the riot scenes. They're mixed with actual news footage from the real riots. In fact, I kept feeling as though the whole movie might have been better off as a fly-on-the-wall documentary that just detailed the events rather than this weak fictional depiction of them.

The total chaos in the Seattle streets in 1999 is certainly worthy of a movie. The idea that the streets of a major city could become a war-zone of this nature is a horrifying thought. It's too bad Townsend wasn't able to do those events justice. 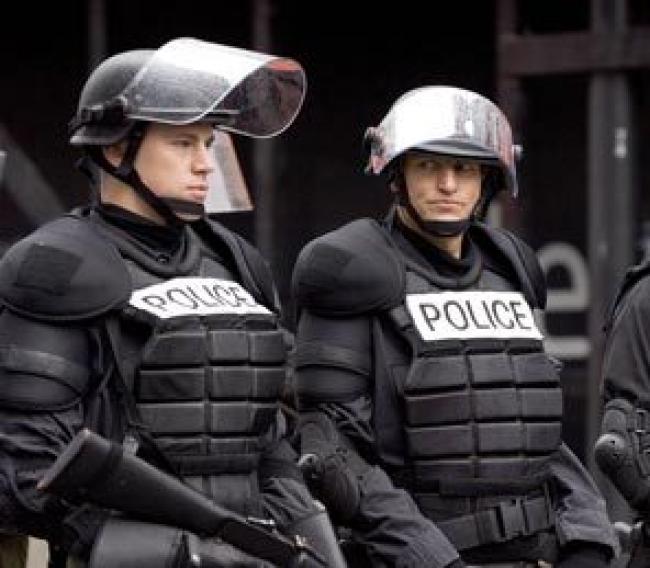 Channing Tatum and Woody Harrelson in Battle in Seattle

We can easily draw some parallels between current protests and riots going on around the country this past year and the events of the Seattle riots. At the core of the protests are people thinking they are trying to right a wrong. However, these types of gatherings always seem to attract groups of hot heads who see these opportunities as an excuse to destroy and loot, which then becomes the focus of the media and law enforcement, diminishing much of the original point.

Scott mentioned that this film depicts different views surrounding the Seattle protests. On one side we have young people with too much time on their hands thinking they are opposing people they think have too much money and power in theirs. In the middle are the police and citizens who are just trying to do their jobs and probably did not give a shit one way or the other.

I never found any character to focus on. Ella is an innocent victim, struck by a passing policeman but she has little screen time. Jean is your typical reporter, sympathizing with her subject instead of just reporting the facts on them. We are meant to pity Jay as his brother was killed. It is his motivating factor for being a pain in the ass to anyone who disagrees with his point of view and to innocent bystanders who just want get by on the street. I never saw Jay as anything but a self-diluted egomaniac. Had he billions of dollars, he would become the very person he is objecting to, forcing his opinions and rules as he sees fit onto others, just as he believes the WTO does.

Since the events depicted in this film occurred, the protestors felt that the media coverage was biased as, “It was pretty much corporate led and therefore concentrating on the sensationalism of the violent aspects of the protests, without really looking at the real issues (such as the corporate domination with lack of accountability)”. While the city of Seattle had a different take. The protest added $3 million to the city's budget for cleanup and police overtime bills and the damage to commercial businesses from vandalism and lost sales was estimated at $20 million.

The protestors claimed victory as they did shut the convention, and the city, temporarily down. In truth, they accomplished nothing but demonstrate that law enforcement needs to be better prepared for such situations. The WTO just had their meetings somewhere else at some other times and the career protestors moved onto their next cause, while the casual protestors grew up, got jobs and went on with life.

Battle in Seattle bored me throughout. It never represents any of its points of view well enough to earn my sympathy. If it is against the WTO, then I needed to see better examples of its evil. If the police were out of line I needed to see more than just angry Dale upset that his wife lost the baby. This film accomplished nothing that it set out to. I did like the marquee on the movie theater some of the actors walk below at the end of the movie that reads, “Thanks WTO. It’s been a riot.” If only Stuart Townsend could have made this film a comedy. Come on. With all these hippies and foreigners, there was plenty of material for jokes.