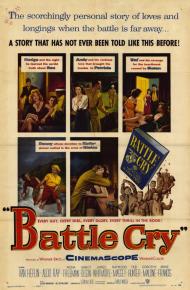 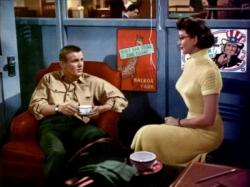 Battle Cry is pretty much a soap opera set around men in uniform. Other than the very end of the movie, there is no action to be seen. These men don't need to fight in a war, they have enough problems with their love lives. Hunter plays the all American boy who has a fiancé back home but meets a married woman who makes a man out of him. Another guy is devastated when he gets a "Dear John" letter. A shy one finally falls in love with a girl who turns out to be already dating a fellow service man. Another soldier, who brags of being a Lothario, finally falls in love.

At a 149 minutes, Battle Cry is almost unwatchable. So many scenes could have and should have been cut. For the most part, it centers on two love stories who each should have had their own movie. Too often the film abandons one character for an extended period of time to deal with another plot. Any movie this long has got to stay better focused.

In short, Battle Cry is a relic from the 1950's that is for Tab Hunter fans only.