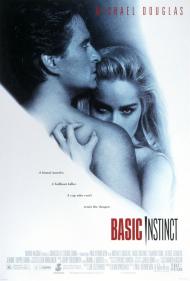 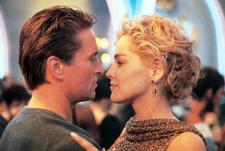 Not since Rita Hayworth vamped her way across the screen in Gilda has a woman so sexually dominated a movie as Sharon Stone does in Basic Instinct. In both movies there is intrigue and crimes being committed but who really cares. The greatest asset of both of these movies is the leading lady shown seducing everyone around her and looking damn good doing it.

In Basic Instinct Stone plays millionaire novelist Catherine Tramell, who is the prime suspect in the murder of her boyfriend. Detective Nick Curran falls for her even though she is the likely killer. What makes the mystery angle so good is that all fingers point at Catherine at the beginning of the movie. Catherine then leads Nick around by his nose to get him to believe she is innocent. Actually she leads him around by a different body part. Basic Instinct does not shy from sex and nude scenes.

Joe Esterhazs wrote some great dialogue for this movie, such as, "What are you gonna do? Charge me with smoking?"and "Killing isn't like smoking. You can stop." However, the coincidences that all fall into place are a bit of a stretch for a movie that is fairly good at covering most of the occurances.

The most memorable thing about Basic Instinct is Sharon Stone's performance. Her ice queen seductress steals every scene she is in. Michael Douglas plays a sad sap with a past well enough, but he is a bit old for this role. Sure, he obviously worked out for his nude scenes but his age, 48, is all to clear and made awkward by the scene where he goes into the night club and is surrounded by 20 some things who are young enough to be his children.

Like Hayworth in Gilda, Stone has less screen time than the leading man, but her character is what gives the movie all of it's heat. Esterhazs even wrote in his autobiography that Stone had sex with him after the movie became a hit, as a thank you for writing such a great character for her to play. 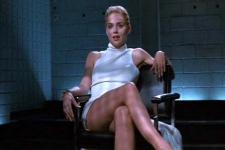 Sharon Stone reveals the secret to her success.

I don't know if it's her performance that's most remembered, or rather just one revealing scene. The moment when Catherine uncrosses her legs to show the police she has nothing to hide is a classic of 1990s cinema. And that's more than can be said about the rest of the film.

Clearly Sharon Stone is the best thing about the movie, but given that the rest of the movie is just so-so, that's not as big a compliment as it could be. You mention Eric that her's is the smaller part and I think that's the secret to the success of her character. Like the shark in Jaws, the less you see of her (well, the less times you see her), the more dangerous and mysterious she seems.

My biggest complaint about the film is the way it's so over-the-top dramatic. The soundtrack in particular is so boomingly dramatic that at times it's unintentionally funny. I guess the mood they're going for is something akin to an old film noir/Sam Spade meets a femme fatale kind of thing. Michael Douglas is no Humphry Bogart though and Paul Verhoeven is definitely no John Huston. Perhaps that's why Stone is so good; she's the only one who really captures the spirit of those older films. Either that or it's because she gets her tits out all the time.

Having a more charismatic male lead would certainly have helped this movie. Douglas is okay, but he doesn't bring any spark to the part. He's rather kind of dull. It's hard enough to see how he gets one hot chick to sleep with him, let alone two. The age difference between he and Stone didn't bother me so much since clearly she was just using him. It seemed more obvious between him and Tripplehorn with whom he seemed to share a past, despite being 20 years older than her.

Basic Instinct was a seminal 1990s film, but like a lot of things from the 1990s, it hasn't aged very well. 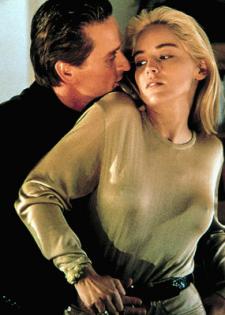 Stone as the femme fatale does indeed steal the movie. She is a movie star in the classic sense of the word. It’s funny that you both mentioned Douglas’ age because I kept thinking how young he looked then. He is not too old for the part Eric, he’s playing a middle-aged cop. Did it ever occur to you that he was supposed to look out of place in the dance club scene you mentioned?

The one thing I have always hated about this movie is the ending. That last shot is just plain dumb.

Yes, they were definitely going for the film noir style, but never completely pulled it off. I agree that the music is very melodramatic and some of the love scenes are unintentionally funny. The sex in this movie is soooo serious. And the girl kissing girl scenes are hilarious in the sense that they were trying so hard to shock and titillate. In fact that sums up this movies problem. It tries way too hard.