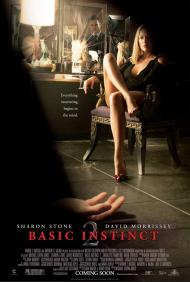 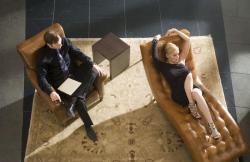 Yes, Sharon Stone is 14 years older in this movie. She plays opposite a pretty much unknown, in America, actor. There is far less nudity and sexual titillation than in the first film. However, the same mind games and sexual allure are still there, and best yet, one of the greatest sexually charged femme fatales the screen has ever seen is back and up to no good.

She is then sent to be evaluated by an analyst, Morrisey. Here, her game really starts. She comes right out and tells him she is writing a new novel where a soccer star dies in a car crash. Her new book is also titled The Analyst. The analyst finds himself attracted to Catherine as she flirts with him sexually as well as mentally. She baits him into her game of sex and murder and he takes the worm like a starving fish.

The biggest difference between this and the original is that it is made very clear through out the movie that Catherine is indeed the killer. From the moment she watches the soccer player drown to the scene of a nude Stone, in hot tub, asking the analyst "Who do you think I'll kill next." The movie never masks her murderous ways.

Sharon Stone and the character of Catherine Tramell are the only reason to see this movie. But like the original film, this one spends far too much time on her target. In the first movie it was Nick the police detective and here it is her shrink. In the first one it was played by Michael Douglas who has a dark past and is trying to play Catherine's game. In this one the analyst also has a dark past and decides to play Catherine's game but he is no Douglas and no match for Stone. Why he is attracted to Catherine is never made clear. He bangs a hot girl early in the movie. In fact, he ends up doing more nude scenes than Stone. Sure Catherine can screw with a man's head, (mind) but he reads her books and fully understands what she is about yet he falls for everything she throws at him.

At the end of Basic Instinct you hoped that Nick and Catherine lived happily ever after fucking like minxes. At the end of Basic Instinct 2 there is no insinuation that Catherine may reform. In fact, she gloats about her success and walks away to find her next victim. If by some weird chance a third movie is made, it should center entirely on Catherine and show how she sets up her targets and gets them to do her bidding.