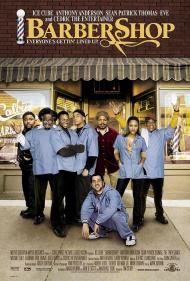 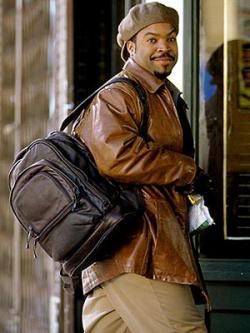 Barbershop is a funny movie with heart. The plot is certainly not groundbreaking but the irreverent humor and likable cast easily make up for it. Its been more than a decade since rapper-turned-actor Ice Cube made his movie debut in Boyz In the Hood and he continues to build on a solid career and is now a bona-fide movie star.

From the producers of Soul Food, Barbershop is the story of Calvin, a young man in Chicago who runs a small neighborhood barbershop that was started by his grandfather and been handed down to his father and now him. Calvin is unsatisfied with his life and is constantly hatching get-rich-quick schemes. When he is unable to pay the bank note on his business, in a moment of weakness, he sells it to a local loan shark. He quickly changes his mind but now it is too late. Or is it? We spend a pivotal day at the barbershop with Kevin and his assorted barbers as they talk about life and anything else that comes up.

The eclectic supporting cast of characters really makes the movie shine. We have the old-timers from Calvin's fathers day, most notably Cedric The Entertainer, who gets most of the best lines; also there is the young gangsta trying to turn his life around, the pseudo-intellectual guy, the African guy, the chick and the white-guy-who-thinks-he's-black. The beauty of it all is that each one of these characters is fully fleshed out and allowed to grow over the course of the movie.

A sub-plot involving a stolen ATM machine is milked dry of laughs in a slapstick manner, but it garners enough chuckles to not hinder the over-all enjoyment level. 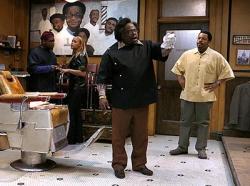 I have wondered in the past why no one has ever remade It's A Wonderful Life. The movie is so dated and in black and white. It stars the great Jimmy Stewart and it could probably never be equaled. However, The Barbershop is about a close of a remake as you can get.

Calvin, played by Ice Cube, is married with a child on the way. He owns a business, a barbershop that he inherited from his father. He does not have passion for the job. He wants a different career. He feels tied down to a life he doesn't think is important. Sounds a little like George Bailey doesn't it?

Through the course of the movie and endless amounts of advice and opinions from everyone around him, Calvin realizes that he has a wonderful life, and he realizes the importance of the Building and Loan. oops, I mean the importance of the barbershop. But it's too late. He has already sold it to a loan shark. Picture the loan shark as a skinny pimped out Mr. Potter. Through a series of events, he rights a wrong and the movie ends on a happy note. Okay, not quite as happy as an angel getting his wings but a happy ending none the less.

Much ado has been made about some of Cedric The Entertainer's lines in this movie. He makes jokes about Rosa Parks and other supposed untouchable subjects. He said that she sat down on that bus because she was tired. It is a great line whether it diminishes the truth or not.

This is a good movie that, like It's A Wonderful Life, says everyone is important and everyone touches other peoples lives. So although this is not an exact remake, it does capture the same great theme. However, unlike It's A Wonderful Life, this movie takes place in one day. We only get bits and pieces into Calvin's history. Ice Cube is a competent enough actor to allow us to see Calvin's weaknesses and unhappiness, as well as his epiphany of life affirming joy. His performance truly carries this movie. It is too bad that all the press could find to write about it was Cedric's lines. 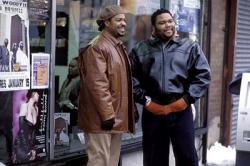 I don't know about inappropriate, but Cedric the Entertainer's lines are certainly the funniest. His barber Eddie, who never seems to have any customers, is the funniest character in the movie. If you watch the DVD, be sure to watch the extras where you find out that it was he who drank the apple juice.

Patrick and Eric are both right about Ice Cube. He's not the greatest actor in the world, but he has a screen presence that allows him to carry this movie and explains why he's a star. It's also nice to seem him given the chance to play an ordinary guy rather than a gangsta or action hero.

Patrick mentioned the subplot with the stolen ATM machine , to me it's the worst part of the movie. Even though it's necessary for the final resolution of the main plot, the humor it generates is old within the first five minutes.

As for being a remake of It's a Wonderful Life, I think that's stretching it a bit. The far less successful Mr. Destiny (1990) starring Jim Belushi is a much more obvious ripoff of the Stewart classic.