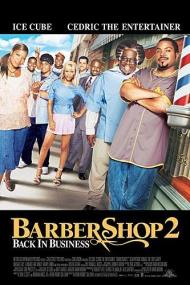 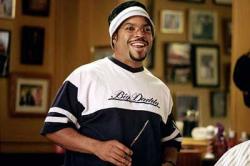 Ice Cube in Barbershop 2: Back in Business.

Calvin, Eddie and the rest of the gang are back for this just-as-good-as sequel to the 2002 hit Barbershop. Calvin has overcome the financial crisis of the first movie only to be challenged by the gentrification of the neighborhood; in particular a hair cut chain called 'Nappy Cutz' that is opening a fancy new store directly across the street from the barbershop. In addition to the familiar faces, Queen Latifah and Kenan Thompson join the cast. Latifah is Gina, Calvin's loudmouthed ex who works as a hair stylist at the beauty parlor next door. Kenan is Kenard, Calvin's inept young cousin who joins the staff at the barbershop but can't find anyone fool enough to let him cut their hair. The two of them breath fresh life into the series without upsetting the chemistry of the well-seasoned cast.

The focus this time is on Cedric the Entertainer's Eddie. In several flashbacks we are shown how he first became a part of the barbershop on the fourth of July in 1967 and how he helped save the shop from being burned down during the riots of '68. Ice Cube (as Calvin) has matured as both an actor and a character. Unlike the recent disaster Torque, this project allows him to stretch his growing dramatic skills. The rest of the cast give good support. The volatile relationship between Eve's, Terri and Michael Ealy's, Ricky continues to evolve and Troy Garity as Isaac is allowed to become more of a real person and less of a white-boy wannabe-black stereotype.

There are no jokes to match the controversy of the Rosa Parks remark from the first Barbershop (ironically, the day I watched this movie was Miss Parks' 91st birthday). Still very few scripts manage to be this intelligent, witty and hip all at the same time. Sure the bad guys are one dimensional and the outcome is never in doubt, but with characters this likable and a cast this appealing the formula works just fine. Barbershop 3 wouldn't bother me a bit.