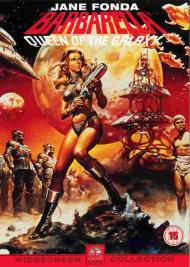 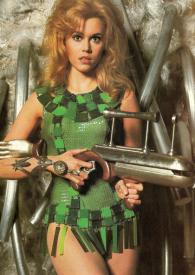 The first time I saw Barbarella, I could not decide if it was an intended comedy or just an extremely bad movie.  Upon a second viewing, I can say without a doubt that it is both.  I laughed and groaned often and sometimes at the same time.

Barbarella starts with a great opening scene.  Someone in a space suit, in zero gravity, starts to undress.  Every loss of clothing reveals an attractive female body part until every item is taken off and we see Jane Fonda in the all together.  Unlike the version I first saw, whose credits covered Fonda's nipples, this version allowed for her nudity to be fully exploited.

Just as I was admiring Fonda's attractive young form, she reminded me that she was just a few short years away from becoming Hanoi Jane.  The President of Earth pops up on a screen and tells Barbarella that he has an assignment for her to go to a planet and find a professor Durand Durand, who has invented a weapon, to which Barbarella asks, "Why would anyone want to invent a weapon?...I mean, the universe has been pacified for centuries."  The President says he is not sure how pacified the people of that planet are.  To which Barbarella asks, "You mean they could still be living in a primitive state of neurotic irresponsibility?"

Barbarella soon crash lands onto a frozen region of the planet and starts meeting a series of people who either want to have sex with her or kill her.  Her first lover is a man who wears a fur suit and accepts sex from her as a thank you for rescuing her from some evil dolls.  He pulls his suit off to reveal his chest is nearly as hairy as his suit.  Barbarella expects making love to be done with a pill and by touching hands.  He introduces Barbarella to the old fashioned way.

She next meets a blind angel named Pygar, who has lost the will to fly.  He lives in a labyrinth populated with drugged people and topless women.  Needing to get into a guarded city to find Durand Durand, Barbarella has sex with Pygar and restores his will to fly.   Pygar carries Barbarella into the city as she shoots the guards with her mini missile projector.  I guess she does have a need for a weapon after all.

Fonda is given some odd, yet memorable lines. "What's that screaming? A good many dramatic situations begin with screaming..."  She says with a straight face.  When she attempts to save a tied up Pygar, she grabs the Evil Tyrant and says, "De-crucify him or I'll melt your face!"  Several lines make for great sexual innuendo.  Speaking of her exhausted weapon, Barbarella says to Pygar, "My energy box is completely dead."  After destroying the pleasure machine Durand Durand says to Barbarella, "You have undone me.  The energy cables are shrinking."

Barbarella is a pseudo sexual psychedelic fashion show.  Try to count how many times Fonda changes costumes.  The sets are visually fantastic yet annoyingly amateur.  The soundtrack is both pop fluff and 60s funk.   I imagine the film makers came up with this movie while tripping on LSD and reading a playboy magazine by light provided from a lava lamp. 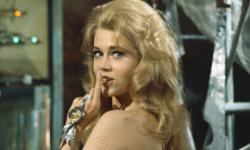 There are two versions of this movie floating around. The original cut with all the nudity that was released in 1968 and an edited 1977, PG version that was re-released to cash in on the Sci-Fi craze started by Star Wars. To get the full enjoyment out of it, you should definitely watch the original cut, with Jane Fonda in all her sexy, young, glory.

This is not a good movie by any means, but it is an enjoyable one. It definitely works best as a comedy. Any time it tries to take itself seriously or create a sense of real tension, such as during the flight to SoGo, it fails completely. That in a nutshell is the movie's biggest problem. Does it want to be taken seriously? Is it a straight out comedy? Is it a satire of pulp Sci-Fi? The further along the story goes, the funnier it gets, as if the filmmakers finally decided it was a comedy about halfway through.

A good example of the uneven tone can be seen by comparing the performances of John Phillip Law as Pygar and David Hemmings as Dildano. Law plays it very serious and straight, while Hemmings seems to know he's in a comedy.

Despite the uneven tone, Jane Fonda is actually quite good in the lead role. She plays the naive, ditzy blonde, sex kitten quite well. She delivers her lines with just the right tone of seriousness and eye twinkle. The character was taken from the Barbarella series of comics, where the look of the character was based on Brigitte Bardot and you can see the resemblance between Bardot and Fonda's look here.

Don't watch this movie expecting it to be very good, but that doesn't mean you can't enjoy it. Just revel in the cheesy, titillation of it all.

This psychedelic sci/fi sex farce has become a legendary cult film, although (as both my brothers pointed out) it is hopelessly horrible. The sets, costumes, script and acting are all amateurish in the extreme. With the exception of Jane Fonda who definitely is in on the joke and I agree with Scott that she plays the dumb blonde part well. Eric, I'm not sure why you seem to criticize her for the dialogue, it's not like she wrote the script herself.

Scott, you mentioned that the character was originally based on Brigitte Bardot. What you didn't say is that director Roger Vadim had been married to the famous French sexpot and was in fact responsible for launching her career. He was married to Fonda at the time this movie was made. I wonder what Freud would say about a man that casts his third wife in a role based on his first wife?

The sexually uninhibited nature on display in Barbarella echoes the married director and star's actual sex life at the time. Jane Fonda has admitted that she reluctantly took part in numerous ménage à trois sexual relations with other women while married to Vadim during the swinging sixties.

There are several other bits of trivia worth commenting on. Jane Fonda became one of the first big Hollywood stars to do a nude scene during her opening credits striptease. Barbarella holds the distinction of being the first comic sci/fi character to get a feature film. Flash Gordon and Buck Rogers had only appeared in serials up to that time. This is one of the few movies in which famous French mime Marcel Marceau's speaking voice can be heard. And perhaps most famously, the missing scientist Barbarella is searching for, Durand-Durand, inspired the famous 80s pop group of the same name. They simply dropped the letter d from the end of each Durand and eliminated the hyphen.

Barbarella helped make Jane Fonda an international icon. It's certainly one of those movies that belongs in the “it's so bad it's good” category. From beginning to end it amuses with its audacious tackiness.