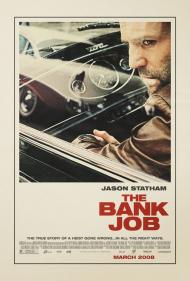 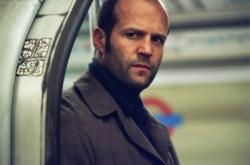 Jason Statham in The Bank Job.

Having no knowledge of this event in British criminal history, I wonder how much of it is actually fact? Consider first and foremost that everyone who lives through this has every reason not to tell the truth of what happened. So how did the story get out?

The movie opens with a menage a trois and then shows a woman, Martine, get busted for drug smuggling. The film then shifts to Terry (Statham). He plays a married father of two who is knee deep in debt to some gangsters. Martine, a flame from his old neighborhood, offers him a lead on a foolproof bank hit on London's Baker Street. After collecting his gang together, Terry and crew go about breaking into the vault containing safe deposit boxes. In truth he is being set up by Martine, who’s boyfriend, Tim, works for MI-6. He is after the photos taken of the menage a trois, as a female participant in it is a member of the royal family.

Terry ands his mates soon discover that there is more incriminating things in the safe deposit boxes than just the sex pictures. Before Terry knows it, he is wanted by people from both sides of the tracks as he has enough information to put all kinds of people away.

Statham and Burrows are the leads and standout in every way. Statham has made his share of duds but this is the kind of role he does best. From Lock, Stock and Two Smoking Barrels to The Transporter, Statham is best when playing a character living outside the law. Burrows is as entrancing here as she was in the small, yet pivotal role of Claire in Enigma. The only other character that interested me was that of Tim. He is a would be James Bond. He is sleeping with Martine and gets her to do his bidding.

Bank Job kept my interest as I had no idea where any of it was going. However, not enough of anything happens, even though so much is going on. For some reason, the robbers all decide to take a nap right after breaking into the vault. No I am not kidding. They all lie down and take a nappy poo. A fight scene at the end is the only action scene but it seems completely tacked on. Since this movie is based on speculation they might as well have added some more action scenes. To excite things up, the director has plenty of tit shots to earn the movie it’s “R” rating, but gratuitous nudity is not enough to make this a great movie, true or not. 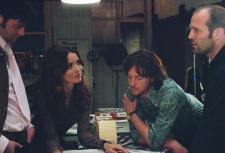 Being true also doesn't make it bad either though.

Actually Eric, nobody knows that much about this robbery, or rather if they do know about it, they're not talking. There really was a D-Notice (public gag order) enforced by the British Government four days after this robbery took place, so no one really knows much beyond rumors that have swirled around since it happened. Supposedly the makers of this film claim to have real insider knowledge, but who is going to stand up and say they're wrong? As the caption at the end of this movie states, over 100 people refused to reveal at the time just what had been stolen from their safety deposit box, so it's hardly surprising no one is in any hurry to come forward now and deny or confirm the events shown here.

The one thing that is on public record is the walkie talkie recordings that the robbers made during the heist. Apparently they are faithfully reproduced here, which explains Eric, why they have the robbers take a nap, because in fact that is what the real robbers said they were going to do during the robbery. It seems incredibly relaxed, but to be fair they weren't just sleeping because they were tired, they also had to wait while the fumes cleared out from drilling into the vault. The vault was a small, confined space and the device they used to drill through the floor did produce a lot of fumes, so it makes sense.

You say Eric that not a lot happens, well maybe not a lot of fighting or car chases happen, but there is certainly plenty of tension and intrigue going on. If you went into this movie expecting to see The Transporter circa 1970 than I can see why you would be disappointed, but if you go in looking for an old fashioned heist film than I don't know how you could be anything but entertained.

I completely with you about Statham though. He was born to play the scrappy tough guy. He's a cockney Bruce Willis. The movie is definitely improved by having him in it. He makes even the more implausible aspects of the story seem at least possible.

Perhaps the story does run a bit long. The Malcom X wannabe character and the storyline with the MI-6 agent infiltrating his group was my least favorite part of the story and could have been trimmed, but while slowing the story, it didn't kill my enjoyment of it.

Ultimately whether this story is a true one or not doesn't really matter. It entertains and true or not, that's all that really matters.