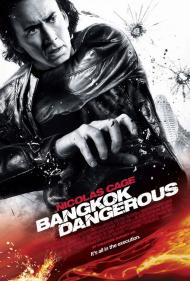 Directed by: The Pang Brothers 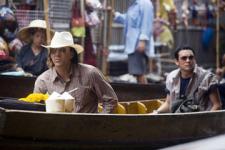 The burnt out assassin shtick is old and tired; espcially here.

The burnt out assassin shtick is old and tired. John Cusack did it best in 1997's dark comedy classic; Gross Pointe Blank and Pierce Brosnan had fun with the idea by riffing on his Bond image in 2005's The Matador. Bangkok Dangerous shares a similar plot device as those two movies, only it chose to leave out the wit and the charm and everything else that would have made it an enjoyable movie.

Nicolas Cage, who seems incapable of making anything other than B-movies these days, stars as Joe, the aforementioned burnt-out hitman. It seems like a lifetime ago when Cage was considered a serious actor and this movie does nothing to change that. At least though, a lot of his bad movies are light-hearted and fun, which is the secret to making a successful B-movie. It's easier to forgive a movie that doesn't take itself so seriously. Unfortunately, this B-movie takes itself very seriously indeed.

When the movie opens Joe's flying into Bangkok to perform four kills, before he retires. Joe uses the same M.O. upon entering any new country; he hires a local who won't be missed to aid him in finding his way around and for delivering messages. After he's finished his missions, he then kills his assistant so that he leaves no trace of himself. Now if someone told Joe about this thing called the Internet and e-mail as a means of communication, he could certainly save himself a lot of trouble and a lot of lives.

Things start to unravel on this mission when Joe meets a deaf pharmacist and immediately falls into the most god awfully sweet, treacly, over-the-top love with her. Apparently this puts him in touch with his human side because he then befriends instead of kills the local that he's hired to be his assistant this time around. In fact, he becomes so friendly with him that he decides to become his teacher and instruct him in the ways of becoming an assassin. His new student, despite being depicted as a street criminal at the start of the film, turns out to be fairly simple-minded. He believes that, "You only kill bad man, yes boss?" as he says in his adorably cliched pidgin English.

The four hits are, of course, the plot points that keep this movie going, but if you were counting on them being well thought out or exciting or interesting action scenes, forget it. He's not so much of an assassin as he is a trigger finger. His clients tell him where and when and how to do the job and he shows up at the appointed time and does it. The only excitement in the movie is when two of the jobs go wrong and he's forced to improvise. And more screen time is given over to Joe's moping and the melodrama than is given to the action.

With so successful and well done movies in this mold in the past, you'd need to really have something new to say or an interesting new way of saying the same thing to make a successful movie of this nature. Bangkok Dangerous has neither.