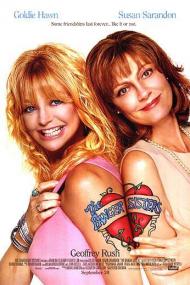 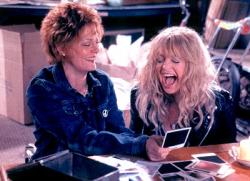 Susan Sarandon and Goldie Hawn in The Banger Sisters.

The Banger Sisters is a tired sitcom plot stretched into a feature length movie. Aging groupie-turned-bartender Suzette (Goldie Hawn) gets fired by her young new boss (As she puts it “I've been drinking rum & coke since before he was born") from the LA bar she has worked at for decades. Broke and indebt she decides to head to Phoenix to seek financial help from Lavinia (Susan Sarandon in a role she could play in her sleep) her ex-best friend who is now a respectable and rich housewife and mother of two teenage daughters. En-route she meets a depressed writer played to perfection by Geoffrey Rush and soon drags him into her messed up life.

There are some funny moments. The references to the banger sisters (as they were once dubbed by Frank Zappa) past are fun, especially in the scene where they pull out and reminisce about the snapshots of rock stars cocks that they collected over the years. Still too much of the plot feels like filler. And the change that comes over Lavinia is completely absurd and not given any justification. I mean her old friend shows up and suddenly she goes from being a control-freak mom to cutting her hair, dressing like a tacky slut from the eighties and going out drinking to a bar. This is supposed to show her liberation and rediscovering of her true self but it comes across more like a sad mid-life crisis.