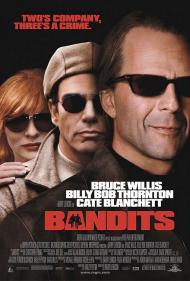 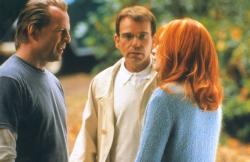 Has this ever happened to you? You're watching a movie, you're laughing at all the right spots, you're enjoying it (apparently), and all of sudden you find yourself glancing at your watch for no reason that you can fathom. That's how Bandits went for me. About 2/3's of the way into the movie, I was suddenly ready for it to end. I don't know if it's because I suddenly saw how it was all going to end up, or if the light hearted and spirited plot just didn't have enough gas in it to carry the story all the way through. It wasn't as if I had plans after the movie. I wasn't in a hurry, just inexplicably, I lost interest and even now, the next day, I'm not really sure why.

The bandits in question are played by Bruce Willis and Billy Bob Thornton. They play the 'Sleep Over Bandits', two prison escapees who begin a string of bank robberies with the plan of building up enough money so that they may buy a night club in Mexico named most appropriately, Paradise. Two bank robbers heading for Paradise? Is that foreshadowing of the most obvious kind, or simply a coincidence? Well, I'm not going to tell you, you'll have to judge for yourselves. Along the way, they pick up Cate Blanchett, an unhappy housewife who decides to tag along on their adventure and ends up falling in love with both men.

There is some wonderful comedy in this movie, mostly supplied by Billy Bob Thornton's hypochondriac character. His cry of 'Beaver's and ducks' elicited one of the longest sustained laughter I've ever heard from a movie audience. I'm positive that the rest of the audience was repeating that line at random moments for the rest of the night, as my fiancée and I did. Why did he say 'Beavers and Ducks'? Good question, can't really tell you, but it was funny as hell.

Bruce Willis plays typical Bruce Willis. The strong, dangerous one, or as dangerous as anyone is in this movie. Cate Blanchett is superb as the slightly off balance, house wife. Her American accent is perfection, and as always she carries an almost ethereal beauty that only made me look even more forward to seeing her as Galadriel in the upcoming Lord of the Rings.

So, this movie has comedy, a great cast, an intelligent script, and good direction by Barry Levinson. Why then, did I lose interest suddenly, so far into the movie? I'm still not sure. Maybe it was too light hearted, maybe the ending was a little too typical 'Hollywood'. Maybe. I don't know really. Maybe if you watch it, you can tell me.