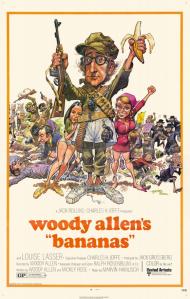 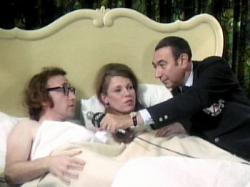 Released in 1971 Bananas is Woody Allen's second movie as writer, director, star. In it he plays Fielding Mellish a neurotic New York underdog who inadvertently becomes involved in a central American revolution. Louise Lasser plays his spacey girlfriend Nancy. She is especially good in the scene in central park where she tells Woody's character that he is "Immature emotionally, sexually and intellectually". He replies "Yeah but in what other ways?"

This movie is much quirkier and visually abstract than most of his more recent films. The overhead shot of Woody on a cross amidst fighting monks comes to mind. Bananas also demonstrates what an inventive and nimble physical comic he is and is funny enough to overcome the fact that every character except Allen's and Lasser's is completely one dimensional.

Bananas is very evocative of the era. For instance the court room scene where Fielding spastically cross examines himself while the jury passes around a large joint screams early seventies. As does the black woman who testifies as J. Edgar Hoover in disguise.

From here the story moves to it's final scene which in my opinion is a comic masterpiece. Howard Cosell's play-by-play of Fielding and Nancy's wedding night. "Alright they're building to a climax. Yes, the action is really getting vigorous."

I recommend this poetic and humorous film to anyone who doesn't think Woody Allen is funny. 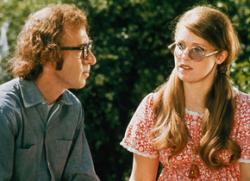 If I made a list of adjectives that I would use to describe Bananas, poetic would not appear anywhere on the list. Humorous, however, would make it, but that's as far as I would go in describing how funny this movie is. It contains a few sparks of Allen's genius, but you can tell that his movie making style was still in development here.

Since so many of Allen's later works are non-stop talking, it was surprising to me to see just how much he relied on physical humor in this movie. It's also surprising how many of these jokes fall flat. The best jokes, the ones that work, are those that carry Allen's trademark neurotic New York wit. His conversation with his therapist includes some Allen gems. "I once stole a pornographic book that was printed in Braille. I used to rub the dirty parts," and "I had a good relationship with my parents. I think they hit me only once, actually, in my whole childhood. They started beating me on the 23rd of December in 1942, and stopped beating me in the late spring of '44."

Far too much time though, is spent with Woody training to be a revolutionary. The slapstick antics, accompanied by a mind numbingly catchy soundtrack, featuring a kazoo of all things, should either have been edited way down or removed all together.

Bananas is an interesting look at a developing genius, but is hardly representative of Allen's best work. 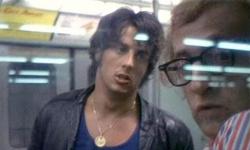 Sylvester Stallone and Woody Allen in the same movie!

Bananas is one of Allen’s most broadly humorous film. As Scott mentioned, Allen relies often on slapstick. Some scenes seem straight out of a silent film comedy. In fact, Allen was obviously influenced by silent movies. During one revolutionary battle we see a baby carriage rolling down some stairs as in Battleship Potemkin (1925).

This is also one of Allen’s most blatantly political films. The opening scene is of a leader being assassinated while the media treats it all like a sporting event. Howard Cosell speaks into a camera, “The weather on this Sunday afternoon is perfect; and if you've just joined us, we've seen a series of colorful riots that started with the traditional bombing of the American embassy - a ritual as old as the city itself.” This is a brilliant satirical comment on how we have, for decades now, viewed world events from the safe distance of our living rooms as if everything is merely a competitive spectacle with a winner and a loser.

I have often found Allen to be a creepy little pervert and he again comes across as one here. When the revolutionary leader takes over, he makes a nonsensical speech that includes the line, “All children under 16 years old are now 16 years old.” Of course the line is meant to be a joke but when you consider how Allen has always had a fascination with young girls and such a line takes on another meaning. Woody Allen makes sex very unsexy.

At one time I preferred Bananas to Allen’s later romantic/comedies but not anymore. This early effort is far less sophisticated and far cruder than what he has done since. I likewise enjoy his films more when he appears in them less. As my 20 year old son said of Allen as he watched part of this with me, “My God, that guy is weird looking.”