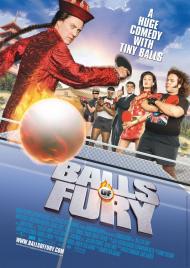 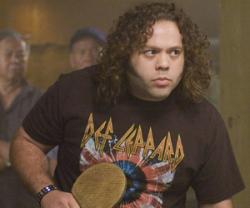 Dan Fogler in Balls of Fury.

Balls of Fury is like a James Bond movie with Jack Black as the action hero lead. Instead of high stakes gambling in southern France it is high stakes ping-pong, "...or as the Chinese say - 'ping-pong'", in Central America.

Okay, so Black does not star in this movie but its lead is an overweight guy who loves rock-n-roll. You just know Black was considered for this part. Folger plays Randy, who was a child ping-pong prodigy until he lost to an annoyingly arrogant German. Years later he is working dinner theater in Reno, doing ping-pong tricks. The FBI recruits him to help bring down a crime lord, Walken hamming it to the hilt as Feng, who is obsessed with table tennis, and who killed Randy's father years before.

With the help of an FBI agent, a blind Chinese ping-pong master and his hot niece, Maggie, who falls in love with him, Randy enters a ping-pong tournament sponsored by Feng. The loser of each match is killed. "What did you think sudden death meant?" As expected, Randy ends up in the final match versing the same German who beat him before.

Along the way, Randy has to deal with ping-pong thugs who range from rough hoods to a little girl in a Dora the Explorer shirt. He also makes friends with a male sex slave, Bader, who is sent to pleasure him while staying at the bad guys lair. "I was auditioning for a cruise ship and ended up a sex slave. Always read the fine print."

The movie ends like a James Bond movie, sort of. Randy battles the bad guy on a suspension bridge with ping-pong paddles and balls as his lair blows up. He saves Maggie and the muscle bound male courtesans, who scream like little girls whenever threatened.

Balls of Fury is, thus far, the funniest movie of the year.

Eric, you barely mentioned ping-pong Master Wong who is the funniest part of the movie. I cracked up at his description of the game. "Ping-pong is not the macarena. It takes patience. She is like a fine, well-aged prostitute. It takes years to learn her tricks. She is cruel, laughs at you when you are naked, but you keep coming back for more, and more! Why? Because she is the only prostitute I can afford." They also milk a lot of laughs out of his blindness.

I completely agree that this part was tailor-made for Jack Black. Folger does alright, but most of the laughs come from the supporting cast and he lacks Jack Black's bizarre charm. Not that this movie is a love story by any means, but the "romance" between Daytona and Maggie is completely unbelievable. You can't help but think that Jack Black would have brought that little extra oomph to the part.

There are definitely some James Bond-type elements to the story. The final ping-pong contest between Feng ("It's Feng, not Fang. With an e." "Really? I've been calling you Fang all this time.") and Daytona is very reminiscent of the video game battle in Never Say Never Again, where the loser is given an electrical shock. I wouldn't call it a spoof or a satire though, just similar in some aspects.

The movie was written by two of the guys behind Reno 911, which if you aren't familiar, is a very silly show on Comedy Central. They bring that same sense of silliness to this movie. Not every joke is a slam, but most of them clear the net for a winner. 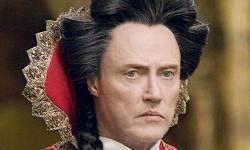 Christopher Walken in Balls of Fury.

In the words of the wise old Master Wong: “It is better to die like a tiger, than to live like a pussy.” That line has absolutely nothing to do with this review. I just thought it was funny. But seriously...

The only thing I enjoyed about this awful movie is the fact that it reminded me of just how much I loved playing ping pong as a kid. We had a table in our basement and Eric, Scott and I would play for hours. This movie brought back fond memories of how much fun that used to be, although most (if not all) of the table tennis on display here is digitally enhanced. All I can say is watching this movie is nowhere near as enjoyable as actually playing ping pong.

Jack Black should have been cast in the lead. Dan Fogler lacks charisma and isn't all that funny either. Although to be fair his role is written as more of a straight man, with all the silly supporting characters providing the jokes. Thankfully the movie runs only 90 minutes as I was more than ready for it to end by then.

I agree with Scott that James Hong is the funniest person in Balls of Fury. It even ends with a sight gag involving his blind ping pong master. Christopher Walken, on the other hand, embarrasses himself as the completely stupid villain Feng. The plot is equally vapid and many of the jokes fail miserably. The male sex slaves, for example, aren't funny and neither is a dead panda.

Perhaps I am being too hard on this silly little action/sports comedy. I just didn't find it to be very amusing. But then again I'm in the majority on this one as Rotten Tomatoes currently gives it a 23% on the Tomatometer, with 99 out of 129 reviews being rotten. You can add me to that list.