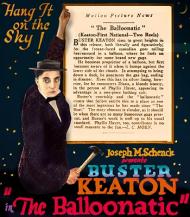 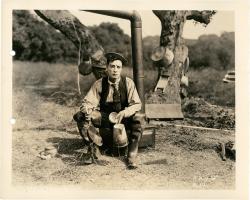 Buster Keaton in The Balloonatic

After leaving the park, he finds some gentlemen about to launch a balloon.   He climbs on top of the balloon itself, and is soon flying in the sky alone.  He climbs down into the basket, where he does his laundry and hunts for food.  The only thing that gets shot is the balloon and Buster ends up in the woods.

There he meets a single woman camping and fishing, by herself.  Whereas she is proficient in outdoor activities, he is practically helpless, at least he seems to be at first.  This is best demonstrated by their fishing abilities.

Some scenes seem surreal, such as when Buster hunts from his canoe.   My favorite gag is when he sees the girl in trouble across the river.  He dives in and swims like mad.  Only he dove into water that is only a few inches deep.  Keaton sells the gag as he keeps raising his head out of the water to take a breath as if he is really swimming somewhere.

I am not sure if the girl he flirts with in the tunnel of love is the same girl he meets in the woods.  When they first meet, she dives accidentally on top of him in the river and gets mad.  Is it because he surprised her, or because she recognized him as the cad from the park?   With this grainy black and white silent film and limited credits, it is honestly hard to tell.

Either way, The Balloonatic works.  Keaton  jumps her with the intention of making out when he first sees her.  By the end of the film he has fought bears and attempted to rescue her.  They end up in a canoe together, in a romantic way.  She even kisses him.  Thus the movie comes full circle.  It even ends on one last great sight gag.

Some of Keaton's films, like Hard Luck, were just a string of events loosely tied together to make a flimsy plot.  The Balloonatic works as a cohesive story arc.  It is a Buster Keaton work of art. 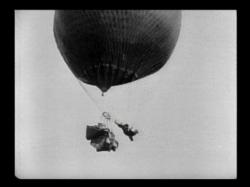 Buster Keaton performs a daredevil stunt in The Balloonatic.

The Balloonatic starts strong. The scenes at the amusement park are funny and clever. The chagrined look on Buster’s face after emerging from the tunnel of love boat ride is priceless. The bit in the balloon is Keaton at his daredevil best. However once he arrives in the woods the movie becomes less funny.

Many of the gags just didn’t work for me. The campfire in the canoe bit and the feet sticking out from the bottom of the boat were absurdly silly but not particularly funny.

The best gag during this part of the movie is the scene with the two bears. Keaton only sees the bear in front of him and is unaware that another has been following him. He uses his rifle to butt the bear over the head and unintentionally fires the gun, shooting the bear that is behind him. I wonder how they got the bear to drop dead so realistically?

I did enjoy the modern can-do attitude of the young woman. She is more proficient than Keaton at surviving in the outdoors but not so much so that she doesn’t pin herself under a small tree she is chopping down.

The ending came as a surprise and is a wonderfully fitting sight gag on which to end the movie. Eric, I don’t think this is one of Buster’s best shorts but it has its moments and is worth checking out. 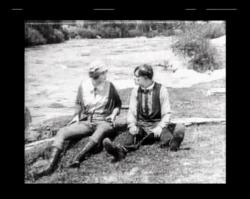 Phyllis Haver and Buster Keaton in The Balloonatic.

For a short with balloon in the title, but with very little balloon, I was starting to think it was inaptly named until the brilliant final sight gag ties it all together.

Terry Jones of Monty Python fame has mentioned Keaton as one of his influences and indeed you can see echoes in the stream of consciousness comedy that Keaton employed to move from one sketch to the next in the way Monty Python's Flying Circus did the same thing nearly 50 years later. As an example of what I mean, Keaton has a series of gags at the amusement park and he has a series of gags in the woods, so to tie them together he employs the surreal device of the balloon, much in the same way that Python would use Terry Gilliam's cartoons to tie their sketches together. Eric, you say this film is a cohesive story, but it's really not. It's as much a series of sketches tied together as any of his films.

Although there isn't that one astounding "Keaton" moment of physical prowess, there are several good gags. My favorite at the amusement park is when Keaton gallantly lays his jacket over the puddle for a girl only to have a car pull up over the puddle and his jacket to pick her up. My favorite of the camping sequence is when Keaton is canoeing and when he reaches the shore, he stands up to show that his feet are sticking out the bottom and he simply walks ashore "wearing" the canoe.

I too wondered how Keaton might have gotten the bear to fall over when shot and actually worried for a moment that they may have really shot a bear for a gag in those days. However, a quick rewind and careful examination shows that just before the gun is fired there is a cut and the bear behind Keaton appears to have been replaced by a man in a bear costume.

Like you Patrick, I don't think this is one of Keaton's best shorts, but like all of his work, there are some quite entertaining and funny moments in it.