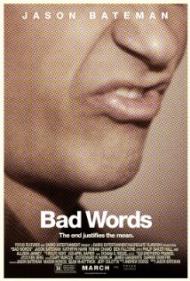 Bad Words shares many traits with the similarly titled Bad Santa. They both feature grown men behaving inappropriately around children, while simultaneously bonding with one young boy. It tries to pack in some heart, but not entirely successfully. It works best as a black comedy.

Jason Bateman stars and makes his directorial debut, playing Guy Trilby. As the film opens Guy, a grown man, enters a local spelling bee competition for school children. He's able to enter due to a loophole in the rules that says to qualify, no competitor may have completed the eighth grade, which Guy never did. He also has a sponsor in the form of Jenny, an online writer, who is following him for the story. Guy keeps his reason for entering a secret for most of the film, but he's clearly an angry man with a chip on his shoulder.

Guy isn't above playing dirty and employs mind games on his fellow contestants, including convincing one boy that his mom is having an affair, while, with the aid of a ketchup sachet, he convinces a female contestant that her period has arrived. He also swears freely and often, no matter the age of those around him. These darker, less realistic moments are the film's funniest. The combination of these tricks and his photographic memory, sharpened by years of working as a proofreader, enable him to go all the way to the national finals.

It is only with Chaitanya, a young Indian contestant, that Guy bonds and only then after Chaitanya wears him down with his incessant cheerfulness and sad lonliness. Although he gets along with Chaitanya, Guy behaves no less appropriately with him and often refers to him by ethnic slurs, telling him to shut his curry hole, for instance. Despite being just 10 years old, Guy takes Chaitanya drinking, then drives drunk with him in the car, and pays a prostitute to show him her tits. It's this extreme behavior that made it difficult for me to take seriously the more heartfelt scenes. I could laugh at those moments, but if thought about as real, you're left with the fact that Guy is one of the last people in the world who should be making friends with a child.

The supporting cast is good, but feels underdeveloped. Kathryn Hahn and Jason Bateman share some funny moments together and an odd sexual relationship, but it doesn't really go anywhere. Allison Janney plays the film's "villain", but her character is an uptight cliche, and if you stop to think about it, isn't really in the wrong at all, apart from one foolish act. And another character, who plays an important part at the 11th hour, also feels like a cliche and the emotional impact that the script is going for is never fully developed.

Bateman has said in interviews that he hopes to do more directing and the good news for him is that he does a decent enough job here that he might get the opportunity to do so. This is by no means a flawless debut, but he hits enough comedic notes that it manages to entertain. Provided you can enjoy some dark and politically incorrect humor, you'll find plenty to laugh at here.

One of the words included in the spelling bee in this movie is “inchoate”. It's an adjective meaning, “not yet fully developed, just begun, rudimentary.” All words that describe this movie to some degree. Bad Words is funny but it's missing something. It feels a bit like a short stretched to feature length.

As modern-day shock-humor it works fairly well. Depending on your point of view you will either find Guy's inappropriate behavior towards his fellow contestants cruel beyond imagining or else laugh-your-ass-off hilarious. But I agree with Scott that it misses the mark when going for pathos. What's not there is a reason to cheer for this guy beyond just the fact that he had a shitty childhood. Boo-fucking-hoo! You're a 40 year old man. Get over it. That alone isn't a valid excuse for his deplorable behavior, but beyond that I never felt like I learned what makes this guy tick.

Bateman is a fine actor, his snide deadpan delivery is just what Guy Trilby requires. Behind the camera he's less distinctive. His direction is adequate but it lacks originality. He resorts to such tried and true tropes as the montage set to music – a Hollywood cliché for more than 30 years. He and the boy bond while behaving badly in public -in slow motion- while a hip hop track loudly underscores the scene. It's a funny sequence meant to shock but there is nothing particularly creative about it. As a director, Bateman proves himself competent but nothing more.

The script features many delightfully disgusting lines. If you are at all offended by the following bit of dialogue, this movie is definitely not for you. This is what Guy says to a woman who swears in front of his young friend. “Why don't you take your potty mouth, go locate your pre-teen cock-sucking son and stuff him back up that old blown-out sweat sock of a vagina and scoot off back to whatever shit-kicking town you came from!” It's not exactly Shakespeare but Bateman's reading is perfect. He tosses off the line blithely with just a trace of detectable venom in his inflection.

Bad Words is a darkly funny comedy but as a movie it feels incomplete.

I sat down with Bad Words in the hopes that it would be entertaining and provide some levity. I appreciate dark comedy and was justly rewarded for having rented the DVD. The humor is crass and picking on children makes a 40 year old man not only a bully but a sadistic bastard. I love it!

Having children around me for the past twenty years often put me in a position where I felt like a shaken bottle of carbonated soda. For any number of reasons I wanted to open the bottle and release the pressure but when there were children around, be it my own, their friends, school mates, team mates or cousins, I held it in. With that in mind, I was the perfect audience for this film. Every time Guy let loose on someone, be it a parent or child I related and relished the moment.

When Guy first meets the Middle Eastern looking Chaitanya on the plane, I was reminded of an overseas flight I once had with a child whose parents sat behind us while he talked my ear off. So when Guy tells Chaitanya, “Why don't you turn that curry-hole around before I tell the pilot your bag is ticking.” that moment came back to me and I laughed my ass off. Like most, I have dealt with many parents over the years who have acted as if their child walked on water. Guy telling one parent, “Your child is so ugly it's not even abductable.” Is one I wished I had used more times than I can count.

Sure, the emotional climax with his father is lacking but that is not the relationship that is most important to the story. Guy’s friendship with Chaitanya is his chance to get past his issues. He tries to be the person in Chaitanya’s life that he wished his father had been in his. The thing is, Guy does not act like a father. His time spent with this child is more like a big brother who has no real interest in the problems he may be creating by exposing Chaitanya to what he does. I would fault Guy for his actions had he actually been the father but his actions simply prove one important point, if parents do not spend enough time with their children, someone like Guy may.

Bad Words is not for everyone and like Scott said, the humor works better than the drama. I fully enjoyed watching Guy act and speak without any filter. Whereas his sex partner is shy, “Don't look at me!” Except for one person, Guy does not give a shit what anyone thinks of him and he eventually learns that even that person’s opinion means little. 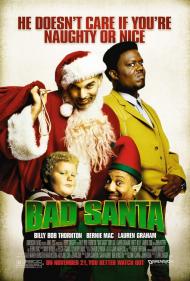