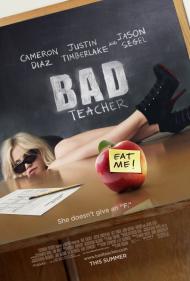 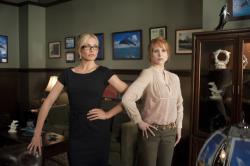 Even though the Hays Code hasn't been seriously in effect for over 50 years, American comedies still stick pretty close to its rules. By the end of most comedies, the protagonist almost always has learned something and mended their ways so the film can end on a heart-warming note. Bad Teacher is a rare exception to this rule as Diaz's character, while having learned a few things along the way, remains pretty much the same person she was at the beginning.

Diaz plays Elizabeth Halsey, a Junior High School teacher, whose plans to retire from teaching are screwed up when her rich fiancee dumps her when he wisely realizes that the only reason she's marrying him is for the money. With no other choice, Elizabeth goes back to work as teacher.

Elizabeth's idea of teaching is to show movies about teaching in class, like Stand and Deliver, Dangerous Minds, Lean on Me, etc.. Her real goal is to earn enough money to get breast implants, which she thinks is what she needs to land another rich husband. When she's not "teaching" (and sometimes when she is) she spends her time getting drunk or high. She only takes an interest in teaching when she learns that whichever teacher's class earns the highest scores on a state exam will earn the teacher a bonus of $5,700.

Diaz deserves credit for playing someone pretty selfish and often mean, but still entertaining and watchable. She's not someone you'd ever want to teach your kids, but somehow I still liked her and that has a lot to do with how innately likable Diaz is.

Although Diaz is good, the supporting cast, lead by Lucy Punch, manage to steal quite a few scenes. Punch plays fellow teacher, Amy Squirrel, Elizabeth's nemesis. Both Elizabeth and Amy are lusting after the dweeby, but rich substitute teacher Scott Delacorte, played by Justin Timberlake. Amy is the annoyingly goody two-shoes opposite who will do anything to expose Elizabeth as the foul mouthed, drug-using inappropriate teacher that she is. Jason Segel and Justin Timberlake likewise manage to generate a few laughs, as does the less well known Phyllis Smith, as Lynn, another teacher.

Given the tendency for Hollywood comedies to be heartwarming, I did worry as the movie wore on that this one would wimp out and have Elizabeth have an unbelievable change of heart. There's certainly an opportunity for her to do that, but it resists that and she really does remain the same inappropriate person she was when the movie started, with maybe a touch more wisdom. There's nothing inspiring about any of it.

Along with Bridesmaids, this movie shows that women are finally making strides in less polite comedy.  Traditionally when women do comedy it's more of the romantic variety. Men have been allowed to be rude for the sake of laughs, so it's about time women get their chance. 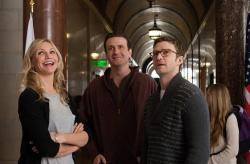 Like any parent who has children in school, I have met and dealt with many teachers.  From my own experience I believe that the character of Elizabeth Halsey is not nearly as rare as this movie implies.  At one point she says she became a teacher because of the time off and she thought it would be easy.  What teacher would not consider those things?

As Scott wrote, she educates her class by showing them lots of movies.  This is meant to create a laugh, and I did laugh, not because I was shocked, but because it was far too familiar.  My sons have come home many times telling me what movie they watched in school. From City Slickers to Inception, my sons have watched lots of movies in school on my tax paid dollar.  Hollywood is a cheap substitute teacher.   At least Elizabeth showed movies related to education.

With that said, Elizabeth seemed a more real character than Amy Squirrel, whose energetic nonsense seems far more suitable to elementary school than middle school.  Bad Teacher is meant to to be a dark comedy, but I saw far too much reality in it to laugh at any of the intended absurdity.   I know this may sound like I am dumping on teachers, but for far too long Hollywood has put teachers on a pedestal that they do not all deserve to be on.

I agree that Diaz is the best thing about this movie, and she ends up being a truly great teacher.  The dodge ball quiz is very effective, although few parents would have allowed it to go on.  Her honesty with the students is rare to hear from a teacher, but also refreshing.   Garrett needed to hear her harsh reality speech.  Elizabeth does change, Scott.  She becomes a great educator.

Would you want this woman teaching your children?

Cameron Diaz is (along with Sandra Bullock) one of the few women in Hollywood that can open a movie these days. As Scott said she has such a likable persona that we root for Elizabeth Halsey even when her actions are completely reprehensible. Yes the supporting cast steals many scenes but Bad Teacher works primarily because of her unique combination of charms.

She has a still smoking hot body at 38 and a winning smile. She also has a talent for slapstick and a funny face. The always hilarious Lucy Punch gets more laughs but Phyllis Smith, as Scott mentioned, is the most surprisingly funny person in the cast. Her befuddled smile and insecure manner made me laugh whenever she was onscreen. Check out the way she delivers this line in response to Elizabeth asking her what she did over the summer. “I went to the zoo by myself nearly every weekend.”

Eric, you say that Diaz’s bad teacher’s behavior is not that rare and I won’t argue the point. But I do think that Justin Timberlake’s Scott Delacorte is a decidedly unrealistic teacher. In fact as a character in general he makes little sense. But then with the exception of Diaz’s Elizabeth Halsey and Jason Segel’s everyman gym teacher the characters are all pretty one dimensional. Even the students are given very little personality.

Bad Teacher is a C average summer comedy with a talented cast. It provides enough laughs for the price of admission but will be forgotten by the time next school year rolls around.