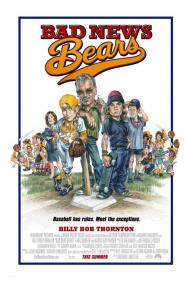 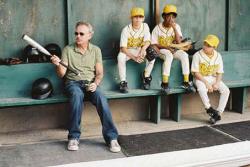 No other movie ever made is more evocative of my early childhood than the original Bad News Bears (1976). While I never actually played on a league team, all of my brothers and my sister did and my father coached for many years. Any time I happen to catch the original on television, I am instantly transported back to those warm summer nights and long Saturday afternoons around the fields of Milwood Little League in Kalamazoo, Michigan. The idea of a remake seemed almost sacrilegious to me. However, this is one remake that was done right. It retains some of the best ideas of the original, while updating it nicely into modern times.

In some ways the impetus of the plot seems like a very current idea, although it was the same in the original. Liz (Harden), a lawyer and the parent of one of the players, sues the little league for discrimination against players of lesser abilities, forcing the league to add another team to its roster. Needing a coach, she turns to broken down former minor league player, Buttermaker (Thornton). He takes the job, but only because he's getting paid.

Since 1976, the plot of this movie has been done to death in countless other films. Misfit coach meets misfit band of kids and together they transform into a team of champions who go all the way to the finals. What sets Bad News Bears apart from those other imitators is the fact that they were all, for the most part, kids movies. Bad News Bears is not a kids movie, in the same way that Thornton's Bad Santa was not a kid's movie. It's full of foul language, alcohol, and jokes that will fly over kid's heads. It's rated PG-13 for a reason.

While some of the acting by the kids is amateurish (for some this is their first acting experience), it is Thornton who carries the movie. I'm not sure why, but as he demonstrated in Bad Santa, there's something inexplicably funny about him being inappropriately vile around children.

The one thing this version is missing, is the heart of the original. I would say that side-by-side, the remake is funnier, but the original made you care more about the kids. In the climactic game of the original, when Lupus catches the ball, you really feel something for him. In this version, that same scene is played for a laugh.

Recently, in my review for Charlie and the Chocolate Factory, I accused my brother Patrick of being obsessed with comparing that movie to the original. I realize that I've done the same thing here. Fortunately, my opinion of this remake to its original is far better than his was of that one. 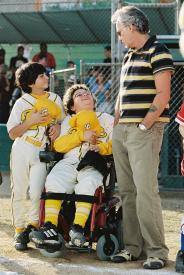 Billy Bob Thornton and a couple of his Bears in Bad News Bears.

As a Dad who has coached kids this age, I have yet to meet one who swears, in front of adults, as much as some of the children in this movie do. Still, I laughed at these potty mouthed kids as they belittled each other. However, none of them swear better than Billy Bob Thornton. I love his sarcasm in this line, "I've got enthusiasm flying out my ass."

The movie is completely Thornton's. He has the best lines. "Baseball's hard." He tells the players at one point. "You can love it but, believe me, it don't always love you back. It's kind of like dating a German chick." Another great scene is when he gets drunk and pitches to the players in batting practice. He hits every one of them with the ball.

As Scott wrote, this movie is not a kid's film. I would have loved to have taken my little leaguer to see it but the language is hardly appropriate for him. I however, laughed my ass off. The movie tries to pull some heart strings near the end but it never quite gets there. A movie this crude just can't get all soft and fuzzy, no matter how hard it may occasionally try. 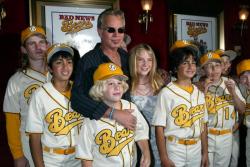 While it manages to entertain, and Billy Bob Thornton is quite good in the lead role, Bad News Bears is yet another completely unnecessary Hollywood remake that brings absolutely nothing new to the story. It's almost too faithful to the original script; only without the heart, and with less talented child actors. We get one new kid who's wheelchair bound, the internet is mentioned, they go to Hooters, and there's a joking reference to Field of Dreams. But otherwise director Richard Linklater (of whom I'm a big fan) brings nothing new or fresh to the movie.

One aspect of Bad News Bears that perfectly demonstrates how times have changed since the original The Bad News Bears came out in the summer of 1976 is the rating. The original was PG while this one, as mentioned above, is PG-13. It's ironic then that in the original movie Buttermaker was shown openly drinking cans of beer in the dugout during games (beer he had spiked with whiskey). For this version though they made him switch to non-alcoholic beer. Society in 2005 no longer tolerated such open displays of inebriation around children, but they did still allow Buttermaker to secretly spike his non-alcoholic beer with whiskey.

Like my brothers I have such fond memories of the original movie that it would be impossible to top. However, for the sake of fairness, if I try to imagine what my opinion of this remake would be if I had no knowledge of the original, that's a completely different story.

It is such an iconic underdog sports comedy that it translates to any generation. The loser coach trying to regain his fleeting former glory with his misfit menagerie of young players will always remain relevant. Its appeal is universal since most of us felt like a Bad News Bear at some point in our childhoods. And this version is quite funny. Every generation can have their own Bad News Bears but I'll always prefer the 1976 vintage. 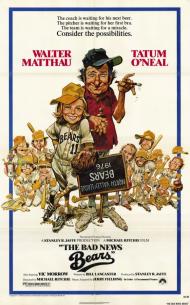