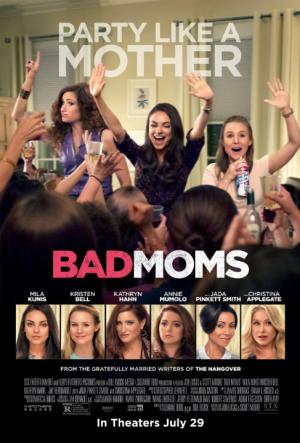 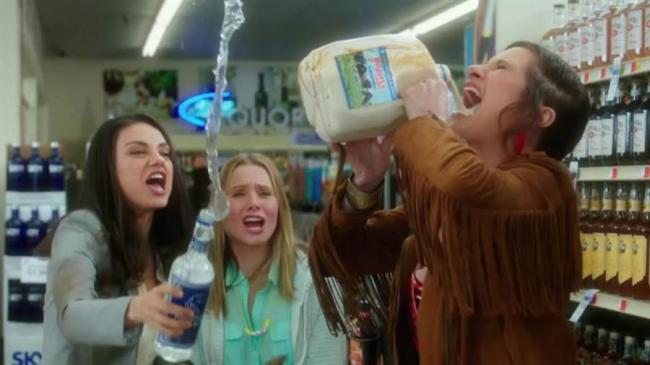 Upon seeing the trailer for Bad Moms, my thought was that it looks like a chick version of The Hangover. As I read up on this film, to write my review, I saw that the same two men who wrote The Hangover, wrote this as well as directed it. I could relate to the first Hangover film as it was about some men taking a weekend break from their lives to let loose. It was a temporary stress release for the guys, knowing that responsibility awaited them the moment they returned. Bad Moms is about a bunch of women who are either playing the victims of the men in their lives or victims of an unrealistic standard they feel they have to live up to.

Amy (Mila Kunis) is a married mother of middle school aged son and daughter. She chauffeurs her children around to every appointment and event, works a part time job and still gets home in time to make a gourmet meal. Carla (Kathryn Hahn} is a single mother who does not support her sons passion for baseball. She instead puts all of her efforts into flirting with every man she sees and uses the words "cock" or "dick" in nearly every sentence. Kiki (Kristen Bell) is a married, stay at home mother of four younger children. They all meet at a PTA meeting and become friends, bonding over their unhappy lives with lots of alcohol and misdemeanor crimes.

Had this been about these women simply needing to get away from their children for a few days and de-stress, I would understand completely and support them. That is not the case. As much as their children impede on their lives, the real problem these women are having is that every single man they know is a man child, at best. Amy's husband is only shown watching television, playing with his phone at the dinner table and masturbating while face timing a nude woman. Kiki's husband is controlling, telling her she has to leave a lunch get together early so she can get home to take care of the kids. Later, Kiki leaves him with their four children and he is shown to be desperately ill equipped to handle the situation. His final scene shows him walking to school with Kiki and the kids only to have Kiki ask him if he forgot the child's back pack. Looking like a little boy caught in a lie he starts to run humiliatingly back to the car as Kiki adds salt to the wound by yelling, "Chop chop!"

Not only are the husbands idiots, so are all of the other men. Amy's boss is a younger guy who piles work on her but lets all of his younger associates slack off, making the middle aged Amy the only hard worker at the office. The male principal is scared of the PTA president, Gwendolyn, played by Christina Applegate, as is the male soccer coach who benches Amy's daughter after Gwendolyn insists. The only man on screen who has any balls is Jessie, but he only has them to fill out his pants. He is the fit single father that all the mothers drool over. Just to show how much of a woman's fantasy this film is, after he has sex with one of these ladies, he compliments her on how well she is at sex and then asks her permission if he may go down on her again.

My wife, a mother of two sons, loved this movie. The parts she enjoyed most were every time one of the men were put down or made fun of. Those very scenes were the worst moments for me. There is not a single admirable man on screen and honestly, even though we are intended to sympathize with them, none of the women are either.

Amy is not just a bad mom but a horrible one. She spoils her daughter, feeding into everyone of her neurotic demands. Amy takes her for a spa day to bond. What does Amy do for her son? She tells him, along with his sister, to make their own breakfast because their mother is no longer interested in such duties. The only time she shows him any personal attention is when he asks her why she didn't do his homework, as she always had, and she explains that he is acting entitled. No shit! That is how she raised him. Then comes the real punchline. She adds, "Don't grow up to be some entitled white dude." WTF! How would this scene have gone over if a black welfare mama told her son, "Don't grow up to be some entitled black dude"? Earlier in the film, Amy's daughter tries to explain how difficult it is to get into an elite school by making the joke that even Japanese kids are being turned down. Amy then comments, "That's a bit racist.." It gets worse. By the end of the film, Without any direction, the son goes from not being able to pour cereal into his bowl without spilling it to being able to make a baked frittata all by himself. That is just how parenting works. Simply tell your child to cook for himself and he instantly becomes a chef. Just tell your son not to act entitled, even though you have raised him to be, and he won't.

Yeah, I know what your thinking, this is a comedy and perhaps I am taking this too seriously. If it was all being played for broad laughs I would agree but this movie is trying to say something about motherhood. These woman are all being portrayed as put upon and unappreciated. All of the men they know are only around to further complicate their lives. I would buy into a story of mothers needing a break and going off for a weekend to unwind only to return with new vigor and perhaps a new perspective that may involve some needed changes. The end of this movie literally features a speech by Amy at a PTA meeting where she goes on and on about how every mom is a bad mom and no one should feel they have to pretend to be perfect. How am I supposed to feel any concern for women who chose who they married, chose to have children, chose to work a job to maintain a live style of their choosing, allow peer pressure to influence them and then come to the conclusion that it's okay to be bad moms but their husbands have to step up.

Last thought. What would mothers from 60 or 70 years ago think of modern mothers? Have you ever heard stories from really old people about their childhood? I can't count how many times I have been told variations of, "We went outside to play and mom would call out the door hours later when dinner was ready." Leaving mom all kinds of time to do what ever she wanted around the house. Sure, we could simply say the times have changed but was it all for the better? Conservative columnists like Ross Douthat wrote in a New York Times column title Liberated and Unhappy: “All the achievements of the feminist era may have delivered women to greater unhappiness.” This movie supports that notion.