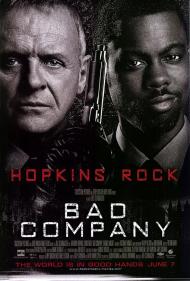 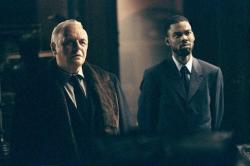 What an apt title this movie has. Other than the amusing and comforting presence of Anthony Hopkins and Chris Rock this flick is purely fish food. The story is so completely formulaic that anyone who has seen more than three movies in their lifetime will know everything well before it happens. From the opening credits to the final scene this is one joyless ride. The few scarce moments of humor are completely due to the two wonderful actors who both made the same disastrous mistake of appearing in this mess.

The preposterous story centers on Chris Rock. Basically a loser who makes a living hustling chess games in Washington Square Park and scalping tickets. His unbelievably gorgeous girlfriend threatens to leave him on the same day that he discovers that he had an identical twin brother who was an agent for the CIA. All he knows is that his brother died in the middle of a mission and he accepts an offer of money to take his place. The humor is supposed to come out in the fact that his twin was his polar opposite in every sense except looks. He listened to classical music, enjoyed gourmet food and was working undercover as a sophisticated antiques dealer. There are a few genuinely funny moments in this set-up but most of them are predictable and wouldn't work at all in lesser hands. Rock is carrying on the fine tradition of the funny African-American comedy/actioncharacter that Eddie Murphy created in the eighties and that everyone from Martin Lawrence, Will Smith and Chris Tucker have been playing ever since. This is, however, a weak entry in the genre.

Anthony Hopkins is completely wasted and looks ridiculous running around shooting a gun at the bad guys.

These two great stars do have a spark of chemistry between them and, amazingly enough, even manage to eke out some mildly entertaining moments in this celluloid tripe. The only possible reason to see Bad Company is for them and I guess if you are one of their many fans that is enough. Still it's a pity that they weren't given a worthy vehicle for their immense talents. Without them this is easily a one star flick. I am giving two stars solely on the basis of affection for the two leads.