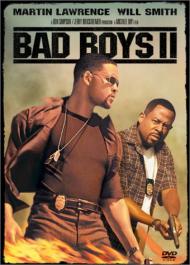 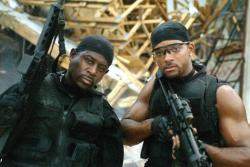 The movie Bad Boys 2, besides being a chance to reunite stars Martin Lawrence and Will Smith (still buffed up from playing Ali), is really nothing more than an excuse for producer Jerry Bruckheimer and director Michael Bay to try out new state-of-the-art slow-mo camera tricks and endless car chases and gunfights amid a steady stream of loud explosions.

This overly long movie starts off promising enough. The stars have great chemistry and their back and forth bantering and bickering keeps pace with all of the gratuitous violence. The story picks up eight years after the first one left off. Martin's children are teenagers now and in one humorous scene he and his partner terrorize the young boy who has come to take Martin's daughter out on her first date. Unfortunately these moments are few and far between, taking a backseat as they do to all the mayhem.

The flimsy plot involves a psychotically ambitious Cuban drug lord who smuggles ecstasy tablets into Miami inside the hollowed out bodies of cadavers. Also Martin Lawrence's sister Sydney (Gabrielle Union) gets involved in the case as an undercover DEA. Eventually she winds up kidnapped and the partners must come to her rescue. This may sound simple enough on paper but after two hours of impossibly over-the-top action sequences and gratuitous violence these adrenaline junkie filmmakers stage a virtual invasion of Cuba that will challenge any viewers ability to suspend disbelief.

Smith and Lawrence manage to add some character development and they do a good job of seeming like real people. Still they are too often drowned out by the cacophony of noise and destruction that constantly surrounds them. This movie's idea of a quiet moment is when Martin Lawrence's dog destroys his new above ground swimming pool during a family picnic in the back yard. One reason I enjoy older movies is that they didn't constantly cut from image to image. In fact the average movie shot was over twenty seconds in duration at one time. I would conservatively estimate that the average shot in Bad Boys 2 is three to four seconds. That's more like a random series of images than a movie.

Still the target audience for this movie should be satisfied with the results. The ante on the high tech action/buddy movie has been upped yet again. 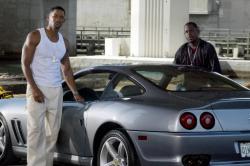 Will Smith and Martin Lawrence in Bad Boys II.

I never saw the original Bad Boys, and I must say that after seeing its sequel, I'm not sorry. This bloated, uneven, overly violent, and mindless movie left me completely cold, with only, as Patrick mentioned, the chemistry of its two stars, and the occasional stylishly shot scene to keep me from glancing at my watch every five minutes to see when it would be over. The camaraderie between Lawrence and Smith kept my watch glancing down to every fifteen minutes, ok maybe every ten, but definitely not more than every eight minutes, unless you count the last half hour, in which case I'd have to say it was maybe every six minutes, but definitely not every five.

There's just one scene in this movie that stands out in my mind. At one point Will Smith's character is standing against one wall while three Haitian drug dealers are hiding on the opposite side of the wall. Two doors separate the room in which Smith is standing and the room the drug dealers are in; one door on either side of him. He has a gun in each hand aimed at both doors. The camera spins around from the room Smith is in, passes through the door, and swings around through the room the dealers are in and then through the other door and back on Smith. Thanks to the magic of CGI, the camera passes right through the doors to create one seamless camera shot that continues to spin around them both. It creates an exciting moment of tension, and is one of the only scenes that isn't edited like an MTV video.

Smith and Lawrence are very good together in this movie. They have that great chemistry that is the bedrock of all good buddy films. They play off each other nicely and seem to enjoy doing it. Unfortunately their antics seriously detract from the tension. Patrick mentions the humorous scene with Lawrence's daughter and her first date. It's very funny and I laughed out loud, but it makes it very hard to take the action scenes seriously. Along the same lines are Lawrence's reactions to the rats when both Lawrence and Smith pose as exterminators to infiltrate the villain's house. There are other very broad jokes that detract from the tension as well. The two rats having sex, and the mortuary scene that is almost straight out of a Monty Python sketch, leap to mind.

Patrick mentioned that he wanted to see more personal moments between Smith and Lawrence. Myself, despite finding them funny, I wish they had toned the comedy down. Although the biggest problem with the movie doesn't happen until near the end, where instead of ending when it should, the movie moves in the ludicrous direction Patrick mentioned, which involves nothing less than the invasion of Cuba.

The last Martin Lawrence movie that I watched before this one was What's the Worst that could Happen? About which I wrote that it was a, 'pathetic film caught somewhere between comedy and thriller, and succeeding at neither.' The same could easily be said about Bad Boys II. 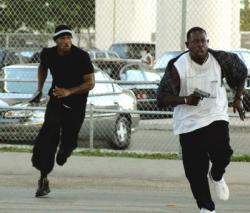 I disagree with Patrick and Scott on one huge thing. There is very little, to no chemistry between Lawrence and Smith. Lawrence's character tries too hard to be funny and other than being a bit cocky and arrogant, Smith just walks through the movie with out any personality to speak of.

The number one rule in any "buddy movie" is that the two leads must be vastly entertaining as they bounce off each other. See Rush Hour for a great example. Lawrence has some funny lines and scenes but they have nothing to do with Smith.

The biggest laugh this movie gave me was when Lawrence and Smith are having a deeply personal conversation in a public place. Everyone thinks they are two homosexuals discussing their sex life. As they walk away, a woman with her children says to them; "You two mother fuckers need to find Jesus. Babies cover your ears."

The action scenes are great and plentiful. My personal favorite is the chase in Smith's hot car that ends with a speedboat exploding on the street. The beginning of the chase is a bit unsettling when cadavers fall of a truck onto the road and get run over. Shooting a bunch of drug dealers is acceptable, but running over some ones naked corpse just seems wrong.