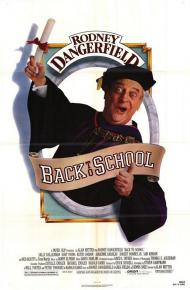 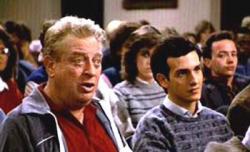 Rodney Dangerfield and Keith Gordon in Back to School

When I first saw Back to School I was close to the age of college student Jason Melon.  Watching it now I am closer to the age of Jason's father, Thornton.   I was curious if my matured age would damper my fond memories of this film.

Back to School starts strong with Dangerfield doing a commercial/monologue about his Tall and Fat clothing store.  I laughed my ass off.  "Hi there. Are you a large person? Pleasantly plump? A little on the hefty side, perhaps? Well, let's face it: Are you FAT?..."

Dangerfield plays millionaire entrepreneur Thornton Melon.  After his latest marriage goes bust, and by bust I mean Adrienne Barbeau's, he decides to join his son in college.  He takes along his chauffeur/body guard, Lou.  When they go to register, the room is filled with students.  Lou offers to "...move some people."

Thornton remodels their dorm room, throws money around, charming almost everyone.  Although Jason at first enjoys his father's company, Jason eventually becomes jealous of him as his larger than life personality, and money, dominates everything around him.  Even when he walks in on a girl showering he gets off by bribing a policeman, whose wife is expecting, "Remember, the best thing about kids is making them."

Although not an intellectual, Thornton is a business owner and knows how life works.  He immediately offends his business Professor, whom Thornton comments, "He doesn't know dick."  Sam Kinison is hysterical as their history teacher.  After a student answers why America pulled out of Vietnam, he asks through grinding teeth, "Is she right?"  He then goes on a hilarious rant about his experience in Vietnam.  Thornton falls for their literature teacher played by the husky voiced Sally Kellerman.

Things do not come easy to Jason as they do for his Dad.  Jason has the hot's for fellow student, Valerie, who is dating the star member of the dive team, of which Jason is the towel boy.   Jason wants to prove himself, while Thornton hires people, including Kurt Vonnegut Jr., to do his homework.  This eventually leads to a father/son confrontation.

As Jason, Keith Gordon is playing the straight man to everyone else's high jinks.  This was pretty much the last film he acted in.  He would go on to become a director.  His credits include The Singing Detective, which stars Robert Downey Jr., who here plays Jason's political minded best friend.   "Violent ground acquisition games such as football is in fact a crypto-fascist metaphor for nuclear war."

Of course the real star is Rodney Dangerfield and his endless supply of one liners.  "The football team at my high school, they were tough. After they sacked the quarterback, they went after his family."  "With the shape I'm in you could donate my body to science fiction."   "Lay off Vanessa. She gives great headache."   My favorite line has always been when Thornton tries to ask Kellerman out, but she says she cannot because she has to teach a class. He then asks, "I'll tell you what, then. Why don't you call me some time when you have no class?"

I laughed nearly as much as I did the first time I saw this movie.  It really has some great comic moments.  What I did not remember, but enjoyed during this viewing, was the heart felt relationship between Thornton and his son.  I doubt very much that my son wants me to go to college with him, but it would certainly be an honor if he did. 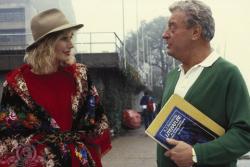 Sally Kellerman and Rodney Dangerfield in Back to School.

Eric, I didn't understand your love for this movie back when it came out and I still don't understand it now. Sure, it contains some funny moments, but overall it's pretty cheesy. Dangerfield can be a funny supporting character as in Caddyshack where he's a scene stealer, but as the main character of a movie it's just too much for him to handle.

He does deliver some very funny lines. Such as, "Bring us a pitcher of beer every seven minutes until somebody passes out. And then bring one every ten minutes." or "What's a sauna without bubbles. Bubbles [to the big breasted blonde], get over here." among many others. And even though it's an obvious joke, I laughed every time he said Dean Martin. He was able to deliver a one line zinger with the best of them.

I also enjoyed this exchange between Sally Kellerman and the stuffy English business professor when she asks, "Oh! What do ALL men want?"  To which the professor replies, "He wants you to dress up as Wonder Woman? Tie him up with a golden lariat and force him to tell the truth?"

This movie also couldn't be more 1980s. From the flash of breasts that was required in all 1980s comedies, to the music (including an appearance by one hit wonder Oingo Boingo featuring future soundtrack composer Danny Elfman) and the fashion, not to mention Robert Downey Jr.'s hair. It is also unabashedly politically incorrect with Dangerfield saying lines like, "The Japs will kill us on labor." And how much more 1980s can you get than having the blonde kid from The Karate Kid as the bully?

One area I categorically disagree with you Eric is in your opinion of Sam Kinison. I never found him funny as a standup and I don't find him funny here. Hearing him scream doesn't make me want to laugh, it makes me want to cover my ears.

There are some funny parts but it has a hard time sustaining itself as a full length movie. I can completely agree with you on one thing Eric. I too laughed nearly as much as I did the first time I saw this movie, which based on your review seems to be about half as much as you did.

William Zabka and Keith Gordon in Back to School. (Who wants to see another picture of Rodney Dangerfield?)

Rodney Dangerfield was a throwback to an earlier era. Like Groucho Marx and W.C. Fields he was adept at one-liners and much more of a comic than an actor. His humor was of the Borsht Belt burlesque variety. He was a true original with a unique persona and one of the last of his kind. He was also much older than the character he plays here. He was 63 passing for early 50s.

I have to agree with Scott that Back to School is cheesy but at the same time it’s quite funny. It is quintessential 80s frat-house style comedy. The story isn’t important because you know it’s going to have a happy ending. It is a college fantasy movie where everything goes right for the good guys and the bad guys never win.

Although Dangerfield rightfully dominates the humor, several supporting players get funny bits as well. Most notably Sam Kinison (I agree with Eric. I have always found his screaming hysterical) and Robert Downey Jr. Kurt Vonnegut’s cameo is also worth a chuckle.

But make no mistake this is a one man show with Dangerfield spouting one liners right and left in reaction to seemingly innocent comments. Often it is his delivery and not the actual joke that sells it. In your head, if you listen close, you can hear the Ba Du Bum sound after each one. Eric and Scott both mentioned their favorites. Here are some of mine…

On his second wife:
“Oh, we were doomed from the start. I'm an Earth sign. She's a Water sign. Together, we made mud.”

On education:
“I think I'm attracted to teachers. Yeah, I took out an English teacher. That didn't work out at all. I sent her a love letter... She corrected it!”

“Please, try to understand. I don't have the background for this. I mean, the high school I went to, they asked a kid to prove the law of gravity. He threw the teacher out the window!”

At his wife’s party:
Trendy Man, “Mr. Melon, your wife was just showing us her Klimt.”
Thornton Melon, “You too, huh? She's shown it to everybody.”

And the following exchanges in the hot tub full of bikini clad girls:
Bikini Girl (pouring a glass of champagne), “Say When.”
Thornton Melon, “Right after this glass.”

Dangerfield’s old-fashioned zingers are the best things about Back to School. The weakest part is the diving competition. Jason should have been allowed to be the hero, not his old fart father. Dangerfield’s stunt dive is the dumbest part of the movie. Overall though Back to School does what any good comedy should, it provides the audience with plenty of laughs.