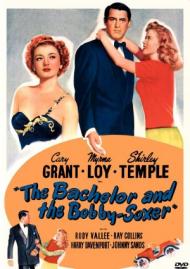 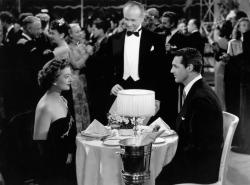 Myrna Loy and Cary Grant in The Bachelor and the Bobby-Soxer.

The Bachelor and the Bobby-Soxer is a dated oddity of sorts. First of all, if you don't know, a bobby-soxer is simply a teenager identified by the type of socks they wore then. Margaret is a judge who is taking care of her teenage sister. In a modern version it would be a single mother. The teens in this movie have their own slang terms like "slumpish." They also have this annoying piece of dialogue repeated several times in the movie."Hey, you remind me of a man. What man? Man with the power. What power? Power of hoodoo. Hoodoo? You do. Do what? Remind me of a man..." It may have been cute in 1947 but now it seems more like an annoying nursery rhyme.

Richard is an artist that acts like James Bond on holiday. He dresses in suits, dines at nice restaurants and surrounds himself with women. After giving a lecture at a highschool, under aged Susan falls in love with him. She sneaks into his apartment, and although nothing happens, he is ordered by the court to date her until she decides she no longer is infatuated with him. The idea being that if she is forbidden to date him then she will want him all the more. To further complicate things, Susan's older sister and Richard fall in love. Susan has a basketball playing classmate who is in love with her as well.

The charm of the movie is Susan pretending to act like an adult and Richard pretending to act like a teenager. Susan is eventually wizened up in such a simple way that you wonder why they didn't go that route in the first place. Richard comes to enjoy acting like a teen. He thinks he legitimately won a race at a picnic and proudly displays his trophy like a kid after a little league championship.

Although not nearly as funny as other Cary Grant movies, it is notable for the cast. Cary Grant was at the height of his amazing career. He had just made Notorious and the follow up to this movie was The Bishop's Wife. Shirley Temple was two years away from retiring from movies at the ripe old age of 21. Consider that the same year this movie was made, Marilyn Monroe, who was 2 years older than Temple, was just making her film debut. Temple is quite attractive in this film and her career could have easily gone on for many more years. Myrna Loy had just appeared in the Oscar winning The Best Years of Our Lives. She and Grant would team up again the following year in Mr Blandings Builds His Dream House.

The Bachelor and the Bobby-Soxer is a decent enough movie, but had lesser stars appeared in it, it would have long since disappeared to the darkest shelves of some long forgotten movie vault. 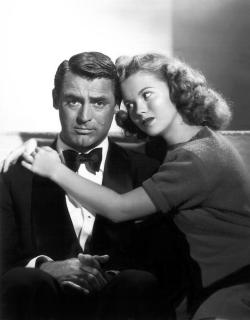 Cary Grant and Shirley Temple in The Bachelor and the Bobby-Soxer.

Eric is right, the only charm this movie offers is created by the cast. The lackluster script hasn't aged well, the plot is ludicrous and the behavior of the characters silly. If not for the glorious cast it would indeed be long forgotten.

Cary Grant lifts any movie with his mere presence and this one is no exception. He was the perfect movie star and the greatest romantic comedy leading man ever in the history of cinema. Myrna Loy wasn't exactly chopped liver either. Together they exhibit great chemistry but this vehicle doesn't give them much chance to interact. The climax at the nightclub is the only truly inspired scene in the movie.

This is the best remembered of Shirley Temple's roles as a young woman and as Eric said she could easily have kept making movies. Although it would have been impossible for her to ever have recaptured the dizzy heights of her childhood career. She has the comic timing of the old pro she was at the ripe old age of 18.

Like the main stars the supporting cast is better than the material. Singer turned actor Rudy Vallee plays the comic foil with the unenviable task of competing with Grant for Loy's affections and scene stealing Harry Davenport is funny as the blustery old patriarch.

Overall this one is a disappointment. Grant and Loy are much better and have a smarter script in the next year's Mr. Blandings Builds His Dream House. This one is for big fans of the stars only and even then worth only one viewing. 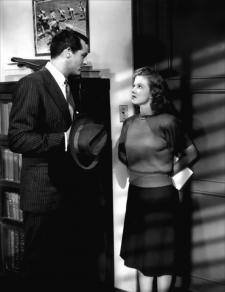 Holy crap, Shirley Temple has tits! That does not seem right.

I agree with both of you that Grant, Loy and Temple make this movie work, but I think I enjoyed it a little more than both you. While it does start kind of slow, it picks up speed when Grant makes his appearance and gets better as it goes along. Like you Patrick I thought the scene in the night-club near the end was the funniest and the best scene in the movie.

I don't know about Temple having a career as an adult. She's okay here, but it took me most of the movie to get past the fact that little Shirley Temple was almost completely grown up and had bosoms! I suppose if she'd made enough movies I'd have gotten used to the idea eventually, but I can only imagine how difficult it would have been for people of the time to accept her in a more grown-up part.

This movie is extremely dated, you're right about that Eric. Can you even imagine the plot of a movie today that encouraged a 30-something man to date an underage high-school girl?

You imply Eric that the plot of the movie is for Susan to mature and Richard to act younger. It's actually the opposite. At the beginning of the movie Susan tries to act mature and Richard is still running around like a younger man. If the writers had followed through with that idea and by the end of the movie had Richard act his age and Susan act her's this could have been a lot better. They do both end up dating someone their own age, but that's about it. Or, they could have had Loy's character learn to loosen up, but by the end of the movie, no one has really learned anything.

Okay, so this isn't Grant's best movie or a true classic, but there's still stuff to enjoy. Yeah, I won't be rushing to watch it again, but I enjoyed it enough the first time.