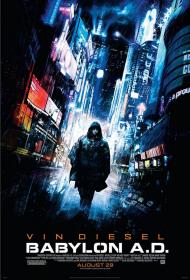 Vin Diesel and Melanie Thierry try to find their way through a disorganized mess.

Mathieu Kassovitz is one of those versatile celebrities. He directed this movie as well as numerous others, such as Gothika. He acted in Munich and was the object of Audrey Tatou’s affection in Amélie. He has also written screenplays, including the one here for Babylon A.D. If his credentials make anything clear, it is that he has yet to excel in any one area.

In this poorly written adaptation of Maurice G. Dantec’s novel Babylon Babies, Vin Diesel plays a gun for hire in a depressing, post-apocalyptic future. In an eastern European country, he is hired by a gangster to take a girl and a nun to New York. Later in the movie it is revealed that the girl is vastly important to the powers that be in the United States. Why they chose such a low rent way of getting her to the U.S. is just one of many plot holes.

I confess that I have no knowledge of the material this movie is based on, so I am not sure if the writing is to be blamed on the screenplay or the novel. Vin Diesel and Yeoh have ample scenes of kicking ass, as they move about a world of desperate people. If the action is enough for you, then this movie succeeds on the most basic of levels. However, it has some major missed opportunities. The movie mentions religion quite often. Prayer is discussed more than once. Then (spoiler alert) we discover that the evil leader of the U. S. is manufacturing religion to help control the population. This film could have really said something about religion if it only had the balls to do it. It could have also been allegorical to the early chapters of the New Testament if it wanted to take that route. Unfortunately, Mathieu Kassovitz takes the film in the most obvious, yet tedious, direction of sci-fi thriller.

Some of the greatest science fiction films like Matrix and Blade Runner entertain as well as make you think. Babylon A.D. is a film that could have succeeded on that level, if only the powers that be had seen it as more than just an action vehicle for Vin Diesel.