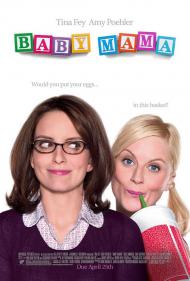 Baby Mama is a chick flick to be sure, but unlike most chick flicks, it isn't a romantic comedy, but a buddy picture. And although the plot involves a surrogate mother, the heart of the movie is really just an updated version of The Odd Couple. The reason this movie works so well though, is similar to why a good romantic comedy works. The chemistry between the two leads, Tina Fey and Amy Poehler (honed over many years on Saturday Night Live) is fantastic.

Fey plays Kate, her stock slightly nerdy, slight uptight character. Kate is a single successful business woman whose biological clock has started ticking into overdrive. When her doctor tells her that due to her T-shaped uterus she is unlikely to conceive herself, Kate turns to surrogacy. The agency she goes to, run by a scene-stealing Sigourney Weaver, sends her Angie (Poehler). Angie is the complete opposite of Kate. She's Oscar Madison to Kate's Felix Unger and despite their differences they seem to hit it off. Unfortunately, Angie comes equipped with a trashy common-law husband. When Angie and he split up, Angie ends up moving in with Kate and that's when the Odd Couple really takes off.

That's also the one complaint I have about the plot. Angie is the only potential surrogate Kate is shown interviewing and despite being complete opposites and from very different lifestyles and despite the scummy husband, Kate decides to let Angie carry her baby. I know she has to for the plot to work, but it seems very out of character. Why not interview a few more people?

Like on her sitcom 30 Rock, Fey is surrounded by funny supporting characters here. She is the straight woman to everyone else, which makes the moments when she does lose her composure even funnier. Poehler gets the most jokes, but Weaver is great as is Steve Martin, who plays Kate's very new-agey boss (he rewards a good job of Kate's by giving her 5 minutes of uninterrupted eye-contact).

The best way to judge whether or not you're watching a chick flick is to measure the depth of the male characters. The shallowness of the depth is in direct relation to how much this movie is aimed at women. Greg Kinnear, who plays Kate's love interest is nice, but kind of dull. Martin, while funny, is only given the one character note. Kate's doorman is the stereotypical funny black guy. And Angie's husband is scummy. I'd say pretty standard for a chick flick. Although I'm sure some women would say that turn about is fair play and the men in chick flicks make up for the many female parts that are mere eye-candy.

Despite the sitcom feel to the plot, Baby Mama is hilarious at times. Fey and Poehler are so good that I hope they make more movies together . That would be a first wouldn't it? A woman and woman comedy duo? 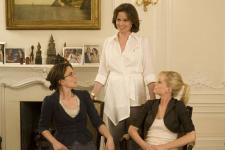 Television has seen many female comedy teams; Lucy and Ethel, Mary and Rhoda, Laverne and Shirley, Kate and Allie. Fey and Poehler may very well be the first movie female duo.

Fey’s charm is that she comes across as the sane person in a world of nut jobs. From Angie’s low class stereotypical antics to Barry’s ridiculous idea about the seashell, Kate is the one relatable character in the movie that the audience can see themselves in. What else helps is that Fey is in real life a mother. The scene where her sister asks her young child, if the brown stuff on her hand is chocolate or poop is right out of mine as well as probably many parents history.

Like Scott, the men are nothing more than background distractions. Although Barry is the most ridiculous male character, Rob is the most unbelievable. He is a good looking, unattached single father, business owner who use to be a liberal lawyer. At a public question and answer session with Barry and Kate, Rob asks Kate what Barry’s new store will do to help out the local neighborhood, as if it is somehow required of large businesses to donate to small ones. In true political form, Kate never answers the question.

I also like Weaver’s performance as Chaffee. It is reminiscent of her role in Working Girl. She is very condescending in both. I do not understand the reason behind the ageism jokes, Fey wrote for this film. Kate and Angie are constantly making fun of her pregnancy. Chaffee, “I’m expecting.” Angie, “Expecting what? A social security check?” Kate, “I know. It’s gross.” I guess they are just middle aged mean girls.

Cute and sweet are the two words that come to mind. The humor is story driven which gives it a nice amount of heart. Fey is a great television writer and I agree that Baby Mama is like an expanded sitcom. At the end we go from Kate dramatically finding out the baby Angie is carrying isn’t hers then directly into Angie’s hilarious entrance into the hospital. “Why don’t you bitches help me?!” This fast switch from pathos to high comedy is a staple of the sitcom, probably best exemplified by The Golden Girls. It works because we care about the characters.

Kate and Angie are both basically likable people and Fey and Poehler have fun tossing the comedy and serious moments back and forth with ease. They aren’t one dimensional people, as most of the supporting characters are. Speaking of which can’t Greg Kinnear get leading roles anymore? Lately he’s been playing second fiddle to comics. The two women here and with Ricky Gervais in Ghost Town.

Although set in Philadelphia Fey takes some shots at wealthy Manhattan mothers. “Come along, we have a play-date with Wingspan and Banjo.” I am a big fan of 30 Rock but this movie has given me deeper appreciation of her talent. Like Woody Allen she can write one-liners as well as character driven humor; also like Allen her persona is urban and neurotic. She might just be the best female writer/comic since Mae West.

Baby Mama is not a great movie. It is entertaining, a bit heartwarming, with some decent laughs. The ending is all too predictable and a bit overcooked. Did we really need the “baby’s first birthday” montage? Still I like the idea of a female comedy team. I’d pay to see Fey and Poehler join forces for a buddy road movie, especially if Fey pens the script.

As far as the Sigourney Weaver age jokes go, I think Fey was just being topical and catty of course. More women over 50 are becoming pregnant these days. It’s ripe for humor.