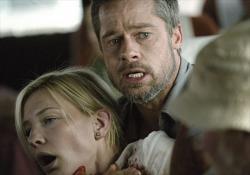 Babel is movie that's trying to make a point and the point is that when people can't or won't communicate, bad things happen. The point it really makes though is that people make stupid decisions and then guess what? They have to accept the consequences of those decisions. It's a depressing film with hardly any likable characters, so maybe its real point is that there are idiots around the globe. Except you get the feeling that some of these idiots you're supposed to feel sorry for.

The movie weaves four storylines together. Brad Pitt and Cate Blanchett are the biggest names in the film, but they get no more screen time than the rest of the cast, despite what you might have been lead to believe by the previews. They play the "ugly American tourist" couple on a bus tour of Morocco trying to patch together their damaged marriage. A couple of young boys are playing around with a new rifle they were given by their father to shoot jackals and they start firing it at passing cars. One of their bullets hits Blanchett in their tour bus. Brad calls his nanny in San Diego and tells her that he needs her to stay with their children instead of going to her son's wedding since he has no one else to stay with them. Instead, the nanny takes the children into Mexico with her, despite not having their parent's permission and even though she is an illegal alien. The fourth storyline bears only a tenuous connection to the other stories and involves a Japanese, deaf mute teenage girl living in Tokyo with her father. She is the only character in to the movie who invokes sympathy, but then how hard is it to make an audience feel sympathy for a cute, but deaf, teenage girl who is alienated, confused and alone?

Everyone in this movie makes mistakes. Pitt's mistake is thinking that a vacation will solve his marriage and I know the film makers want you to think he's rude and intolerant of the locals and yes, he is insensitive, but how about someone in the audience has their wife shot sitting next to them and then see how calmly and perfectly they react. The boys make the obvious mistake of playing with a gun as if it were a toy. The teenage girl makes the mistake of thinking that sex will some how help her find acceptance in the world and make up for the loss of her mother. And lastly, the Nanny, who understandably wants to go to her son's wedding, makes every mistake you can possibly imagine. At the end she has a scene that is supposed to make you feel sorry for the predicament that the film makers have put her in, but I could muster no sympathy for her.

While the message might be a bit murky, the production values are top notch. From the gritty desert to the neon colored streets of Tokyo, the movie transports you visually around the world with a "you are there" feeling. The acting is equally well done. While Pitt and Blanchett are the big names, it is Rinko Kikuchi as the Chieko, the Japanese teenager who steals the movie. Although the movie does run too long, it runs at a quick, frenetic pace that means it never drags.

The mistake Babel makes is trying to be a big important movie, but while it's good at showing the foibles of different cultures clashing, and how the breakdown of communication can adversely affect us all, it does it in a muddled, heavy-handed manner that offers no solutions or real resolutions.

Babel is a movie with its heart in the right place, but like its own characters, its message gets lost in translation. 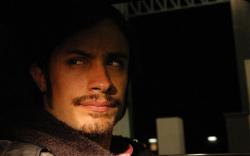 I have always found that liberals are emotionaly motivated. They make decisions and support causes based on an emotional reaction. The Conservative mind set is more about facts. Emotions make for great movies but not deciding factors. When you base decisions solely on emotion, you end up like any one of the characters from Babel.

Babel is a lesson in making emotional decisions that are all wrong. The two boys are playing with the gun. They are jealous of each other and jealous of getting attention from the girl and attention from Dad. They shoot at the automobiles as a contest to up each other. The Japanese girl decides sex will make her popular. The illegal alien nanny makes the decision to kidnap the children in her charge so she can attend her sons wedding and hook up with an old flame.

The American couple are not getting along but are the one and only true victims in this movie. Even though it was a dumb decision to go on vacation, to solve their marital problems, you cannot blame them for someone else shooting her. It was though, their bad decision to hire an illegal alien to watch their kids while they go to the other side of the world.

Of course this movie wants you to feel sorry for these people. I felt empathy for the boys because, hey, they are boys and their brains have not fully developed. I remember neighbor kids throwing rocks at passing cars when I was a kid. Sure it was stupid, but stupid is what kids do best. Making good decisions is not.

Like Scott, I think the nanny is the least sympathetic character. She knows she should not take the children. She knows she is an illegal alien. She knows her nephew is not reliable. So consumed by the emotional need to be at a wedding she makes every bad choice. How can I feel sorry for a person who makes the decision to do everything wrong?

I never imagined that a liberal like Brad Pitt would make a movie that shows just how hopeless the liberal thought process really is. In real life, Pitt is helping to fund housing construction in New Orleans. That sounds like a logical choice, but his idiotic statement that, "This (Katrina) was a man made disaster and this is a man made solution." shows just how his liberal mind works. Hey Pitt, man does not control the weather. Emotions and passions are great as long as they are not what you use as a deciding factor.