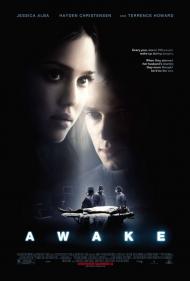 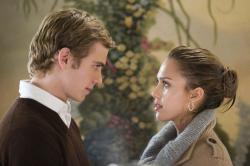 Often I wonder who gives the green light for a particular movie to be made. Do these people actually read the script? Do they think it will make money? Are they impressed because a famous movie star is attached to it? After watching Awake, I was puzzled as to who in the hell thought this was worth making into a movie. It all became clear after a quick look on line and I discover that Joby Harold wrote and directed this mess, while his wife is one of the producers and his brother in-law has a small role. With so many relatives around did no one involved in the movie dare tell Harold what a piece of crap he was making?

Clay is a wealthy New York business man trying desperately to fill his dead father’s shoes. He is in love with his mother’s gorgeous assistant, Sam, but is too afraid of his mother to tell her. Clay is the "good" guy in the movie, yet how can I root for a mamma’s boy?

Clay has a heart condition and needs a transplant. He has recently made friends with a heart surgeon. They go fishing in the East river together. Clay’s mother has a top heart surgeon brought in to do the surgery, but Clay stands his ground and insists his friend do it. Apparently, he would rather defend a friend to his mother than the woman he loves. Just before the surgery, Clay and Sam get married without his mother’s knowledge.

Once Clay gets put under he realizes that he is actually still mentally awake. He cannot move a muscle but can think and feel. It also becomes apparent that the doctors working on him, and his new bride, are up to no good. Lucky for Clay, his mother is a whole lot smarter than him and it turns out that she was right about everything. He should have used her doctor and he should not have married Sam.

To fully explain just how bad this movie is, and to stress how much you should avoid it, I have to tell you the ending. All of the bad guys get caught and mom dies. The one and only character with any brains ends up dead. Clay is left without the one person who loves him. The woman he loved was actually trying to kill him, as was his best friend. As a last note to guarantee this guy spends years in therapy, his mother informs him, spirit to spirit, (don’t ask) that his father was not really someone to look up to. He was in fact an abusive drunk, and he did not die on Christmas, dressed as Santa, by accidentally falling over the railing. His mother hit him in the back of the head with an andiron, sending him over the railing in a Santa suit on Christmas as a young Clay watched.

Christensen and Alba are a great team. They are two of the worst actors of the decade. The best acting Christensen does is when he is lying motionless in surgery. But even that gets messed up by him narrating how bad the pain is. The best thing about Alba’s performance is her hair styles. While at work it is pulled back in a business manner. While playing around with Christensen it is down. When pretending to be concerned with her new husband’s surgery outcome her hair is disheveled.

I do not have a clue what Joby Harold was trying to do with this movie, but I know one thing. He deserved a V-8 slap to the forehead by those around him. As does anyone who still wants to watch this movie after they read my review. Awake won't put you to sleep, you will be too busy laughing at the ineptness of it all to nod off.