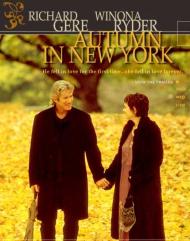 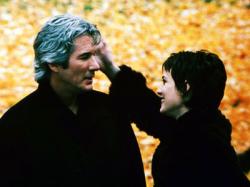 Richard Gere and Winona Ryder in Autumn in New York.

It is said that writers are treated with the least respect of anyone in Hollywood. Yet, it is a good script that determines more then anything whether or not a movie will entertain or enthrall, as Autumn in New York proves. What could have been a strong romantic movie with two attractive stars in one of the most glamorous cities in the world, is instead turned into typical 'Movie of the Week' stuff without clear character motivation and an ending that can be seen from a mile away, and all because of a weak script. If that isn't power worthy of respect, I don't know what is.

One of the things commented on by most viewers of the trailer is the disparate ages of the two leads. Believe me, that is the least of this movie's problems. In fact, that really isn't a problem at all, because unlike a great many movies, this one does not ignore the age gap, it actually comments on and makes jokes about it, thus alleviating what at first seems like an embarrassment.

In Autumn in New York, Richard Gere plays Will Keane, an aging playboy and restaurant owner who meets and seduces a young, innocent girl, played by Winona Ryder. He treats her to a glamorous evening out on the town before taking her back to his place for the night. The following morning however, before he can give her the brush off, she tells him that she is dying of heart disease. Moved by sympathy or something, the plot never really makes it clear, they try to make a go of the relationship, but it doesn't work and they break up. Then in one of those movie moments, he decides he loves her after all and the movie moves towards it's inevitable ending, only pausing along the way to bring Will's estranged daughter into the plot, in the movie's only real twist.

Despite the predictability of the plot, this is not the movie's weakest point. That award goes to the dialogue. I am a fan of both Richard Gere and Winona Ryder, but neither of them can manage lines like, 'You mean leave the universe of me, to get a cup of latte?' or 'Food is the only thing beautiful that you can depend upon.', with any real sincerity.

As for the direction, it is merely adequate. I am no film student or expert on camera angles, but halfway through this movie, I couldn't help but notice that there were no long shots. The camera is constantly close to the actors or in full close up and gives the movie a very claustrophobic feel. For a movie with New York in the title, you see very little of it, except for those obligatory scene changes where suddenly you see the skyline for a second. This movie could have been known as Autumn in Any City USA, for all the part that the city plays in this film. Not that I can really blame the director from wanting to focus so closely on two such attractive stars, but a few wider shots might have broken up the monotony.

Although many people may be looking for a romantic date movie to rent, sadly, they will have to keep looking. 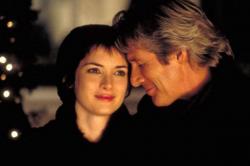 Winona Rider and Richard Gere in Autumn in New York

When Will is first introduced to Charlotte, he recognizes her as being the daughter of a woman he once knew. My first thought was that Charlotte may very well be his daughter, considering how easily women spread their legs for him. Charlotte is certainly young enough to be his daughter. For the record, Richard Gere was 51 and Winona Rider 29 when this movie was released.

As Scott mentioned, they make light of the subject. Just before their first date, Will asks Charlotte, “You think I'm too old for you?” who responds, “Oh, no... I collect antiques, or I aspire to.” If only the dialogue stayed so light and witty the entire time. While walking after dinner, they kiss and Charlotte notes, with a wistful air, “I can smell the rain. When did I learn to do that?”

The morning after they have sex, Will politely tells Charlotte, “We have no future.” Something he has probably told many women over the years after a one night stand with them. Charlotte gives him a response he has likely never heard before, “I know. I am sick. It’s my heart. Nobody thought I would last this long.”

Shortly thereafter we get a scene of Gere and Rider walking hand in hand through a leaf covered landscape. It is as beautiful as it is symbolic, considering his age and her health. The opening scene of Central Park certainly romanticizes New York in the fall. I was reminded of when Billy Crystal and Meg Ryan walk past fall foliage in that scene from When Harry Met Sally (1989). Why do so many romantic films bring me back to that movie?

I once considered Gere a variation of Cary Grant as he also is aging gracefully on screen. This role is, however, without much dignity, especially when he comes to the Halloween costume party dressed as a dog. Will also loses all kinds of points when he has sex with an ex-girlfriend at a party that he brought Charlotte to. Will barely gives his long lost adult daughter any of his time. He even has a horribly stupid line when he describes Charlotte’s mother as being a, “Democrat but incredibly snobbish.” As if that combination is somehow rare.

To get back together with Charlotte, he begs her, “Will you let me love you? Please. Please. Let me try again.” I would have cheered had she thrown his ass out. He does not love anyone or thing but himself. Oh sure, the point of this story is that he comes to love Charlotte, but whoop-de-friggin-doo. He is not a likeable character and deserves nothing but heartache.

Sam Trammell has a small role as Charlotte’s gay friend. It is a mostly insignificant part but considering that this is a love story about a terminally ill young woman; I found it interesting that the most successful film Sam Trammell would appear in, after many television appearances, is The Fault in Our Stars (2014), about a terminally ill young woman.

Autumn in New York is a depressing love story that has nowhere to go. They are not meant to be together, and we learn early on that it will not last. What are we intended to get out of this and most importantly, where in the hell was Frank Sinatra’s version of "Autumn in New York" on the soundtrack?

Winona Ryder and Richard Gere in Autumn in New York.

Autumn in New York works way too hard at being tragic. Aging womanizer meets beautiful but terminal woman who's fond of butterflies, long strolls through the leaves in Central Park, and Emily Dickinson. Yeah it's pretty sappy. This woman teaches the man to love something other than himself. Although it's billed as a love story, Autumn in New York is really the tale of one man's atonement for leading such a selfish life. By the end of the movie he's a changed man.

The age difference isn't the probolem so much as the fact that Gere and Ryder don't exactly send sparks flying with their chemistry together. They may look like movie stars but in several scenes they demonstrate how limited both of their acting ranges are. I'm thinking specifically of their big confrontation/make up scene, which falls completely flat. And I thought it was a little creepy that Will used to date Charlotte's mother, and somehow remained good friends with Charlotte's grandmother even after he got another woman pregnant while he was with Charlotte's mom.

Autumn in New York isn't a completely awful movie but the script never rises above the banal and it never met a cliché it didn't like. Both my brothers mentioned the poorly written dialogue. This includes the doomed lovers' habit of reciting lines from sappy love poems to each other. This movie would have been better off silent. The creaky melodramatic plot is a relic from that era anyway.

I'm trying to find something positive to say about this movie and the only thing I can come up with is the presence of the late great Elaine Stritch. She brings her considerable acting chops to the role of Charlotte's grandmother, adding some much needed color to the drab proceedings in her few scenes, but there's only so much she can do.

Autumn in New York aims for the ranks of such classic tragic screen romances as Dark Victory, Love Story, and Terms of Endearment but it falls far short of its target. It's not even as good as Stepmom.