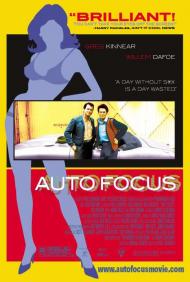 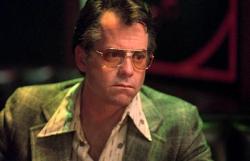 Auto Focus tells the story of Bob Crane, famous for his role as the title character in the hit sixties sitcom Hogan's Heroes, and infamous for the seamier aspects of his life that culminated in his brutal murder in 1978.

Greg Kinnear is much underrated as an actor. He has been quietly building an impressive body of work for the better part of a decade. This time he deserves an Oscar nomination. He captures the surface charm, humor and looks of the man while realizing his tortured inner struggle with sex at the same time. Not an easy task by any means. Likewise Willem Dafoe is as good as we have come to expect him to be in character role after character role. This time he is John Carpenter, home video innovator, swinging partner of Bob Crane and the man charged with and later acquitted of his murder. Their scenes together are the heart of the movie.

Auto Focus takes advantage of the fact that men, in general, have never been all that good at keeping there desires and addictions in check without influence from an outside force, whether it be religion, a wife and family, their career, or societal customs. During the nineteen-sixties, the sexual revolution (spurred on by the invention of the birth control pill) put many people in a position to pursue whatever physical pleasures they wanted for the first time in their lives. Bob Crane is merely one casualty of this era of excess. Once Hogan starts down the path of pornography and promiscuity, though it costs him both family and career, he is never able to climb out of the dead-end cycle of strip joints, orgies and darkrooms. His favorite saying “a day without sex is a day wasted" sums up the last dozen years of his life.

But although this movie has great acting and deals with an interesting topic I found myself bored by the time the credits rolled. There are some fun moments where Colonel Clink and other characters from the old show are recreated but in all honesty Bob Crane couldn't hold my attention for the length of a movie. 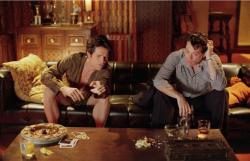 Auto Focus reminded me of an old saying that goes something like this: 'Too much of anything is not good for you.' Other than breathing, sex should be the one exception to that rule. Bob Crane proved it otherwise.

This was Bob Crane's problem. His obsession of filming and photographing his sexual adventures gave him pleasure, but it also destroyed every other thing in his life. Every man can watch this movie and understand Crane to a point. That is to say, we all have sexual desires and fantasies. For most of us it is a spare time distraction. For Crane, it became his motive for living and ironically enough it also played a role in his death.

This extremely mature film deals with a rare subject, lust. Seriously, most Hollywood movies have sex in them that derive from love or lead to love. This movie is pretty much just about Crane's desire to get off while being video taped. It is the films gimmick but it is also the films weakest point.

Another aspect that is a bit cloudy in this film is that of the relationship between Crane and Carpenter. It suggests that Carpenter was bisexual and had a crush on Crane. It also points the obvious finger at Carpenter as being the murderer. He is the obvious suspect, but the films only suggested motivation is that near the end of the movie, Crane wants to end their relationship.

As Patrick wrote, the acting here is good. It is not good enough though, to let us into the psychology of these characters, so that the motivations may be clearer. This movie leaves you with the knowledge that Crane had a sexual hobby that dominated his life and ultimately lead to his death. The movie however never says why.