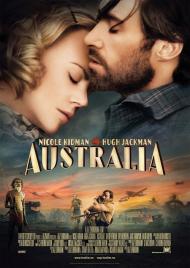 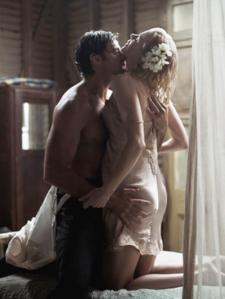 Australia is intended to be one of those epic love stories set in a historical time period. It is long, features two big stars and has a scene of death and destruction. Think of it as Australia’s answer to Gone with the Wind, only not as good. In fact, the movie takes place in 1939. The Wizard of Oz even plays a pivotal role in the movie.

Kidman plays a British royal who goes to Australia where her husband has been murdered. She takes charge of their cattle ranch and falls for a cowboy, Jackman. The movie starts like a comedy. One scene has her underwear all over a public street as Jackman used her suitcase to beat up someone. The movie turns into a western, then into a romance and then into a war movie.

As this film is titled "Australia", it makes a nod to the aboriginal people of Australia. As is expected, they are treated like wise wizards who know far more than westerners. They sing and do magic, or at least think they do. The movie never says for sure. Either way, the aboriginal story line is the one area that should have been cut.

Speaking of editing, one scene has the main characters driving cattle across country. They come to an area of land where they will not have water for several days. They all dread the path and make a big deal about it, but then the movie cuts to them arriving in the big city, so I guess all of their worries were for naught.

Kidman and Jackman walk through their roles without giving their characters any personalities. Kidman is minor royalty who falls for a rough out back free spirit. I never saw that coming. So many scenes are paint by number that you can see them coming minutes before they get there. One scene is almost laughable as Kidman gets Jackman a suit and begs him to come to the ball. He declines but then wait, at the right moment he shows up dressed like Rick Blaine and clean shaven as all of the guests turn to look in his direction.

Australia has two climaxes. The movie could have ended when they get the cattle to town and used the money they made to refurbish their farm. To include some history, the movie continues with the Japanese attack on the Australian city of Darwin. The previews showed the fighting to be part of the movie and not just an action climax to a romantic melodrama musical comedy. Australia has plenty of things going on but not enough substance in any of it to garner a decent reaction from the audience.

Essentially this movie is a western.

I actually enjoyed this movie much more than I thought I would, but that's mainly because I was expecting so little from it. It seemed like it would be one of those overblown epics so full of itself that it would be devoid of all charm. Instead I found it to be a fairly generic epic but with enough sound and fury to keep me mildly entertained right up until when the movie should have ended. That last hour, which feels like part two, was definitely too much and should have been left out.

If this movie had ended with the completion of the cattle drive I probably would have given it a half star more than I did. Everything is tied up neatly with a happy ending. It seriously feels like the movie is over at that point. When it keeps going it feels like a sequel. Practically everything is wrapped up at that point. I enjoyed the first half, but not enough that I was desperate to watch it for more than an hour more!

I also don't think that movie falls into as many genres as you claim Eric. There are some humorous moments but it's clearly not trying to be a comedy. And Nicole sings to Nullah, but it's not a musical. It is a Western Love Story with a bit of a war movie added to the mix. It's the war part that should have been cut, or been made the full focus of the story without the cattle drive stuff at the beginning.

There's just not enough depth to this movie to justify its length. It's like trying to spread too little butter across a large piece of toast. The further out you spread it, the thinner it gets. 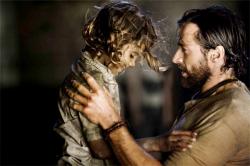 I'm with Scott on the aboriginal storyline. It's what gives the movie whatever originality it possesses, which isn't much. I was unfamiliar with the Australian Government's longstanding policy of removing mixed race children from their homes (a practice that continued into the early 1970s when it was permanently abolished).The story of one member of these Stolen Generations is the closest this movie comes to being unique. Like Scott, I found Nullah to be the most interesting person in the movie.

But I agree with Eric that the hodgepodge plot is all over the place. And none of it is subtle. It blatantly steals plot points and copies iconic shots from much better movies. It “borrows” from such movies as Out of Africa, Gone with the Wind, Red River (and a hundred other westerns), Pearl Harbor (or dozens of other war movies). In one scene Kidman and Jackman embrace. It is shot with a fiery red glow just like the scene in GWTW where Rhett says farewell to Scarlett on the road to Tara. The way the main house on the Faraway Downs Estate was shot is a direct ripoff of the movie Giant. We see this imposing structure sitting incongruously in the middle of nowhere. It's tiny lawn looking like a green postage stamp on a large brown envelope.

Australia tries way too hard to be a sweeping romantic epic. It features a plethora of melodramatic closeups and panoramic aerial shots, featuring some not so great CGI, all of which is underscored with the most emotionally manipulative swelling strings. It so shamelessly copies other movies that Australia is just a shade away from being like one of those old movie spoofs on The Carol Burnett Show. Australia is as derivative as it is schizophrenic. Nicole and Hugh play such cardboard cliches that the movie needed a more tongue-in-cheek attitude instead of taking itself so seriously. It's a textbook example of epic movie making done strictly by the numbers.