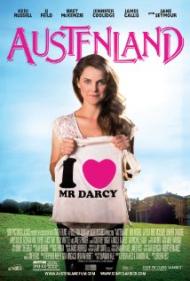 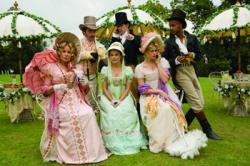 The cast of Austenland.

The co-writer of Napoleon Dynamite, Jerusha Hess, makes her directorial debut with Austenland. She also co-wrote the screenplay with Shannon Hale, the author of the 2007 novel of the same name on which it's based. This is a mildly amusing, if sitcomish, romcom about a thirty-something American woman named (plain) Jane who's obsessed with all things Jane Austen. Her bedroom is a shrine to her favorite author, in particular to the character of Mr. Darcy from Pride and Prejudice, and -even more specifically- to Colin Firth's portrayal. She even keeps a life-size cardboard cut-out of Firth as Darcy standing opposite her bed.

So you can imagine Jane's delight when she learns of a Jane Austen themed immersive experience in the English countryside where guests live in the style of the Regency Era and interact with actors paid to romance them like characters from the pages of Austen's novels. Jane spends her life savings and heads across the pond to fulfill her life's biggest romantic fantasy.

At the airport in London she meets a wealthy, fellow American (the scene-stealing Jennifer Coolidge in her best voluptuous dumb-blonde mode) who is likewise traveling to Austenland. Once they arrive Jane learns that she paid for the cheap “Copper” package and not the extravagant all-inclusive “Platinum” package the other guests purchased. Instead of a grand bedroom she is shown to a small room in the servants quarters.

While the other women are being romanced by the gentlemen characters in the stately country manor, Jane spends her time with the stable boy named Martin. During the course of her week there Jane attends a faux hunt, participates in a theatrical production, and on the last night a grand ball is held where all the “romances” culminate with “engagements”. But it is made clear by the owner Mrs. Wattlesbrook (Jane Seymour) that no “touching” is allowed between guests and actors. Another strictly enforced rule is that any guest caught in possession of any modern conveniences, like a cell-phone, will be expelled from Austenland immediately.

The most curious thing about Austenland is the fact that you are never completely sure just who any of these people are. None of them are given much background and they are all playing a role in the context of the setting at Austenland. Even when the actors are shown by the pool in their off hours you can never be quite sure who's still acting and who's let their guard down. Even Jane, whom we are given a bit more background information about, doesn't really develop much as a character. Due to this lack of depth in the characterizations Austenland works better as a silly comedy of manners than it does as a romance. The cast is good but I didn't buy the ending for a second. 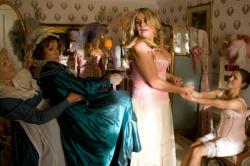 To a certain type of woman of a certain generation the moment Colin Firth emerged from a pond, dripping wet, in that white shirt as Mr. Darcy in 1995's Pride and Prejudice is a seminal one. As recently as this summer, a survey conducted in the UK named that moment as the most memorable British TV drama moment of all time. Also this summer, a statue commemorating that scene was installed of Firth as Darcy rising out of the waters of the Serpentine in Hyde Park, London. Clearly if such a place as Austenland existed in real life, it wouldn't have a problem attracting visitors. While this movie does have its appeal, the more likely you are to want to visit such a place, the more likely you are to enjoy this film.

As Patrick wrote, it's in the comedy where this movie works best and has its most universal appeal. Jennifer Coolidge is a scene-stealer as the over-the-top Miss Charming. Her aggressive sexuality and attempts to put on an English accent provide some of the film's funniest moments. Likewise James Callis (Battlestar Galactica's Dr. Gaius) provides some nice moments of humor as the rather effeminate Colonel Andrews.

I also agree with Patrick about the movie's weaknesses. We never really learn much about these characters. It's all pretty shallow, which is why the comedy is what works best. You don't need to understand the characters to laugh with them.

The ending also feels very manufactured. From the beginning, it is obvious how it will end. Anyone who's ever read a Jane Austen novel knows that the heroine is always the serious, less well off girl and not the vivacious blonde, rich girl. However, the central romantic relationship never feels strong enough for one person to fly across the Atlantic in pursuit of the other person. It feels strong enough to maybe have one person ask the other person out on a date, but not to make life changing declarations of love.

Still, despite the film's weaknesses, it is lightly entertaining and fairly amusing at times. Fans of Austen's work or Colin Firth will get an extra treat out of it. 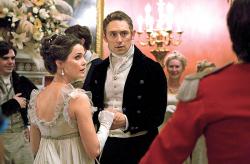 Patrick nailed it when he wrote that the weakness of the script is the lack of depth in the characters. We should have spent a few more moments with Jane before she leaves on her trip. They could have shown how socially awkward she is in our modern world as she has the manners of someone from a Jane Austen novel. Thus when she entered Austenland it would have been like fish entering water.

Although this is “mildly amusing,” there was opportunity for a greater farce. Jane’s cheap “Copper” package is a good example. It does not milk that angle very well. Instead of discovering that her room is small rather than grand, she should have found it to be dank, dark and shared with a grumpy cook with a thick Scottish accent. When others are being waited on while having tea on the lawn, she should be shown having to sit on a blanket, serving herself.

Yes, the comedy still works better than the romance but as you can guess, that is not saying much. When, as Scott wrote, Jennifer Coolidge’s abundant cleavage and faux English accent is all you will remember, you know this movie is in trouble. The scenes where the actors are on their off hours could have been milked more as well. Each actor should have been as far from their characters as possible. Again, farce this script up and it could have been hilarious. They could have told a joke to each other on break and then have one similar happen in Austenland, only to have the actors laugh while no one else understands why.

The possibilities were here but it is all played far too safe. One could say that is a nod to a Jane Austen novel, but this is a comedy and it needed to go farther with the satire. Austenland could have been so much funnier.