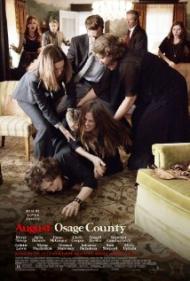 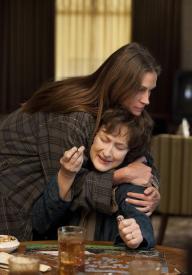 Based on the Pulitzer and Tony winning play by Tracy Letts, August: Osage County is about one seriously dysfunctional American family living in the heartland. When the patriarch goes missing, his relations gather together for support but wind up tearing each other apart. The dialogue was written with a pen dipped in vitriol and the talented cast chew the scenery as they spit out venomous insults at each other. It's an old fashioned histrionic melodrama in the tradition of Tennessee Williams and Edward Albee.

The main joy in the movie is watching two great stars -Meryl Streep and Julia Roberts- face off as mother and daughter. They hurl caustic insults back and forth and even have a full-fledged wrestling match during a family dinner. Theirs is the central relationship in the story.

Streep plays Violet Weston. She chain smokes cigarettes and is addicted to pain pills. Oh and she has cancer of the mouth. She is a cruel woman who relishes hurting others. She is proud of her inner strength and what she sees as her own indomitable will but deep inside she is seriously unhappy. Roberts plays her eldest daughter, Barbara. Barbara's got a rebellious teenaged daughter and she's in the process of losing her husband to a much younger woman. In some ways she is like her mother. They are both control freaks, and of Violet's three daughters, Barbara is the only one strong enough to stand up to her mother.

The rest of the cast all take back seats to these two stars. The supporting women are given more of a chance to shine than the males. The men all play peripheral characters revolving around the women who hold center stage throughout the film. We spend a few pivotal days with the Weston clan as they come to terms with the death of their patriarch. Heated arguments ensue, secrets are revealed, and emotional baggage gets tossed around like luggage in overhead storage on a bumpy flight.

If you enjoy happy endings where everything is wrapped up neatly and tied with a bow, this movie is definitely not for you. Over the course of the story situations change and characters grow but there is no real resolution. Pretty much every one of these deeply flawed people remain just as screwed up at the end of the movie as they were at the beginning. It's light on plot but filled with vividly drawn characters. As an acting showcase -provided you've got the stomach for it- it would be hard to beat August: Osage County.

As Patrick said, this film is based on a play and it shows. Despite the wide open spaces and the occasional car ride, the location of most of the main action is one house. The dialogue is melodramatic and over the top, as is the acting which feels at times as though it's being projected to the back row of a theater. I guess when you have a movie where a woman who spouts bile all day long also has mouth cancer, subtlety is not going to be the word of the day.

This is, again as Patrick said, an actor's movie. The film provides a scene for every member of the cast to shine and something for them to really sink their teeth into and go to town on the scenery. Streep has always been a very actorly actress, by which I mean that while she is one of the finest actors of her generation, you always know when she's acting and it's never been as obvious as it is here. But there's plenty of melodrama to go around and a huge cast amongst whom to share it.

Although Streep is the headliner, to me this was Roberts' film. She gives the finest dramatic performance of her career. She shares a very real mother/daughter chemistry with Streep and a genuine sisterly bond with Juliette Lewis and Julianne Nicholson. It's with Streep though that she does her best work, especially when they are going head-to-head, as they are in most scenes.

Even the smaller parts are well acted though. Chris Cooper and Margo Martindale are quite good as the Aunt and Uncle, while Benedict Cumberbatch, who seems to be in everything these days, dons an American accent to play their sad sack son. Juliette Lewis plays the flighty sister clinging to an inappropriate man whom she obviously sees as her last chance, while Julianne Nicholson plays one of the saddest parts as the stay at home sister trying to finally find a love of her own.

For my final agreement with Patrick about this film I will concur with his statement that there's an old fashioned feel to the story. Melodrama like this harkens back to an older Hollywood. Bette Davis could have played the part of Violet Weston in her sleep. If big, showy, emotional films are your cup of tea then this is the film for you. It's rarely been done better. 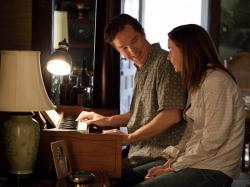 Violet Weston is the most unlikable character Meryl Streep has ever played. One of the best examples is the dinner scene. Even though it is excruciatingly hot, Violet demands all the men wear their jackets at the dinner table. “I thought we were having a funeral dinner not a cockfight.”  She states before proceeding to light up and smoke a cigarette while everyone eats. Everyone then compliments the meal cooked by the help, resulting in Violet stating, “You know she gets paid right.” The meal goes downhill from there.

Violet is bitter as hell and thinks nothing of taking out her frustrations on her family. She exposes their secrets and attacks them when the whim hits her.  As Patrick noted, Barbara eventually has enough and stands up to her. She decides to take her mother’s meds away from her. “You can't do this! This is my house! This is my house!” Violet yells at Barbara who stands her ground, “You don't get it, do you? You don't get it! I am running things now!”

Whereas Streep is playing it loud and brassy, Julia Roberts here is about as far from a pretty woman as she has ever been. She wears a minimum amount of makeup and seems more human than she has ever been on screen. Like Scott, I think she outshines Streep at every turn. The mother daughter relationship they share is the meat of this melodramatic chick flick. They truly work well together. At one point Violet tells a tense Barbara, “I'm not hungry!” who responds, “Eat the fish, Bitch!”

As fun as it is watching them interact, I wanted to know more about the male characters. All of the women throw emotions around like baseballs during spring training, while the men are mostly reduced to walking off screen when they get upset.  There is clearly more to Little Charles than meets the eye. When he first appears on screen he is emotional and awkward. There is a huge secret involving Charles. We see how the secret, once revealed, affects several other characters in different dramatic scenes yet we never see how Charles reacts to it. I get that this is a movie about a bunch of unhappy women, but I personally would have liked it more if Little Charles was given more screen time. It would have made this film a bit more accessible to men.