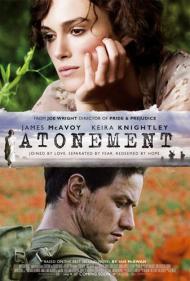 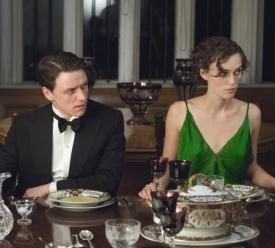 Atonement is one of those movies that is tailor made to win the Best Picture Oscar. It's a romantic epic, set in the past, featuring some beautiful imagery, high drama and terrific performances from its small, all British cast. It's also (which isn't always a given when it comes to Best Picture contenders) a great movie.

The movie opens at a British country estate in 1935 on the hottest day of the year. Thirteen year old Briony Tallis is an imaginative girl who writes short stories and plays. On this day, with visitors to the estate and rumors of a coming war, all mingling with repressed desire and stoked by the heat of the day, Briony commits an act that will affect several lives and set the wheels of the plot in motion.

Cecelia Tallis (Knightly); Briony's older sister, and Robbie Turner (McAvoy); the housekeeper's son, engage in a heated dalliance on this day and are discovered by Briony, who is too young to truly grasp the implications of what she has seen and what emotions it has stirred in herself. When later, another of the guests at the house is sexually accosted, Briony tells the police that she saw the attacker and that it was Robbie. Since the word of the upper-class (even a young girl) is more valued than that of a servant, Robbie is convicted and sent to prison.

He is only given his freedom when war is declared and he is offered the choice of joining the army or remaining in prison. Cecilia, estranged from her family because of the incidents of that day, is in London acting as a nurse, and is waiting for Robbie to come back from France to her. Briony, older now as well, also comes to London to do her duty, and is now aware of what she has done.

If much of this plot sounds like melodrama, it's because it is. It's highly romanticized and very dramatic in parts, but in a really good way. Yes, this is Masterpiece Theater on a large scale, and if that idea doesn't appeal to you, then this movie isn't for you. One very positive note about this movie is that despite its epic quality, it only runs for two hours! Any longer and the drama would have become far too heavy.

It is also beautifully and artistically filmed. The long, continuous shot on the beach at Dunkirk is one of the best shots I've seen in a movie in quite some time. The use of flashbacks is also well done and the events of the movie aren't played out in chronological order. Several times the same scene is replayed from different character's perspectives, to show what really happened.

Knightly and McAvoy are both excellent as the tortured lovers in a very British way. This means that repressed emotion plays a big part of their characters and indeed, a big part of this movie.

Of course no one can ever say for certain, but I will go out on a limb and say that at the very least, Atonement will be one of the Best Picture nominees. 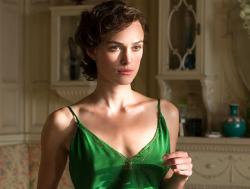 Atonement is a gorgeously old-fashioned romantic drama. I could easily have seen Bette Davis and Miriam Hopkins as the two sisters with Willie Wyler directing. With the exception of the denouement and a couple of four letter words, the script could have been written in the 1940's. The plot is carefully constructed, nearly each scene adding another level. And the dialogue fits the era in which the movie is set. Only instead of trying to sound exactly like real people of the day, it instead mimics the dramatically heightened dialogue of the movies of that time.

The flawless cinematography deserves a mention. I also agree with Scott about the performances of McAvoy and Knightley. They certainly have chemistry. Robbie Turner and Cecilia Tallis are classic star-crossed lovers.

The ending is the absolute height of pathos and at the same time is a bit of a twist. That's not an easy combination to pull off, but Atonement does beautifully. My one small complaint is, although the movie runs under two hours, it could have been maybe ten minutes tighter. There are a few overly long shots where not much is really happening. But this is certainly a very minor complaint. I will definitely want to watch this movie again. 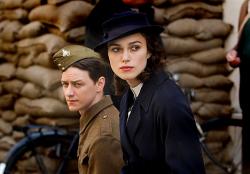 In Atonement, and in most British films that involve the upper class, as much is said in a glance and a movement than in actual dialogue, and the dialogue often has more than one meaning. Paul staring at Lola reveals his intentions as much as him telling her, "You have to bite it!" after he hands her a candy bar. Briony learns that what is implied is often more interesting than what actually is happening. Her baring witness to several things causes her imagination to work overtime and thus she acts as the protagonist, setting the events in motion that she must eventually atone for.

The story is framed by its background settings better than any film since Gone With the Wind. Early in the movie, everyone exists in a sun soaked mansion where light is constantly pouring in windows to highlight the details inside. When the twins run away and everything takes a dark turn it is of course at night. When Briony goes to London during the war everything seems gray. Did the sun not shine on London during the war years? When Robbie is at his lowest he is symbolically walking amongst one of England's worst military defeats, Dunkirk.

Atonement could have trimmed some scenes, as Patrick mentioned. Several shots simply have one of the main characters alone doing nothing. The twins needed less screen time as their presence is only there to get all of the characters outside on that fateful night. The pace is a bit slow but Joe Wright always has something on screen to look at. Even the unnecessary underwater shots are filmed with an intriguing eye.