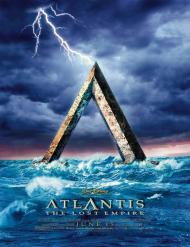 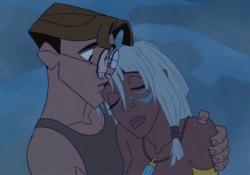 Atlantis is a wonderful afternoon adventure movie. The pacing is excellent. The action is plentiful. And the artistry is wonderful to stare at.

Milo Thatch (Michael J. Fox), a linguist in ancient languages, joins a group of adventurers, led by Rourke (James Garner) in search of the lost civilization. They ride in submarines. They burrow through the earth and they even fly on ancient fish like planes.

Whereas the adventure is fun the movie lacks greatly in the humor area. Other than a chain smoking, complaining old bag (smoking in a kids movie?) and a man nick named Mole who collects dirt, their really is very little humor. Especially for younger children who laugh at pratfalls and slapstick. Which leads me to ask the question, who is the target audience for this movie? My 5 year old wanted to see this movie due to the marketing blitz, but squirmed and practically fell asleep during it. My 7 year old liked it much better. I saw no teenagers in the theatre so I am left with the conclusion that this movie is meant for 7-12 year olds. That is quite a narrow target. Titan AE had pretty much the same audience and it failed to break any box office records. Memo to Disney; one cute, clumsy side kick can go a long way to add to a 5 year olds enjoyment of a movie.

Except for one teensy plot twist, the movie is fairly predictable. However, the history and depth to the imagined society of Atlantis is quite amazing. Kudos to the imaginations of the people who made this movie. 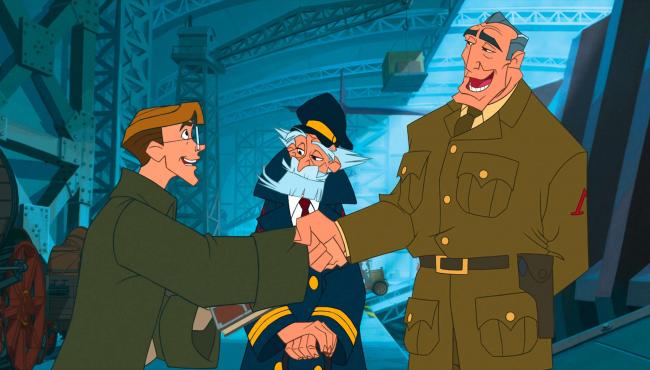 Michael J. Fox as Milo, John Mahoney as Whitmore, and James Garner as Commander Rourke in Atlantis: The Lost Empire.

Actually, I think the target audience for this movie was much wider than just 7-12. I think they intended this to be a family film for anyone over the age of 7 and the decision to not feature a cute sidekick was deliberate. It's the rare Disney cartoon to receive a PG rating and that wasn't by accident. I think part of the problem with its reception, as evidenced by Eric's review, is that when Disney (or any other American studio) releases an animated feature, there's an expectation that it will be aimed at small children since they nearly always are. It's for this reason that the most interesting entries for the Best Animated Feature Oscar tend to come from countries outside of the U.S..

Had this been a more traditional Disney cartoon, the story would have been told from the point of view of Princess Kida, who no doubt would have sung several songs, including one stirring number about how she felt stifled in the life of a princess, her father didn't understand her, and somewhere out there was a world where she would be appreciated as the quirky, intelligent, but beautiful young woman she is. She would also, no doubt, have been accompanied by the fluffy sidekick Eric was expecting. To illustrate the change in tone they were going for, the producers reportedly passed out t-shirts to the crew that said, "Less music, more explosions." This was also the last Disney cartoon to feature guns, and one of the last to show a character smoking, as Eric noted disapprovingly. It even features a suggestive (well suggestive for Disney, anyway) scene, when Milo and Kidda prepare to go swimming and Milo is clearly disturbed when Kidda starts stripping off some of her clothes.

At least for the first act, I was put in mind of a live action movie from the 1940s. That seemed to be the tone the filmmakers were going for. The introduction of Helga and Milo's meeting with John Mahoney plays out a bit like a film noir. I couldn't help but imagine a dream cast of who might have played whom if it had been a movie from the 1940s. Although he would have been a bit old, I pictured Jimmy Stewart in the Milo role. Lana Turner would no doubt have played the femme fatale, Helga. Certainly Peter Lorre would have played Mole. Walter Brennan could have played Cookie. Beulah Bondi would have made a good Florence. Paul Henreid could have played Vinny. Perhaps a teenaged Shirley Temple might have played Audrey and Dorothy Lamour could play Princess Kida. She doesn't look much like her, but at least she'd be comfortable in a sarong. The important part of Rourke, I first thought either John Wayne or Gary Cooper would do, but the character changes in a way that neither the Duke or Cooper would probably play. Once the crew of the submarine arrives in Atlantis and the action kicks up a notch, the tone changes to science fiction instead of film noir and the comparison starts to weaken, but I still had fun imagining how it might have played out with such a cast.

Not that the actual voice cast here does a bad job. Michael J. Fox does good work as Milo. James Garner is appropriate as the military man. And Leonard Nimoy had an amazing voice, perfect for voicing animation. It's a shame he didn't do more and that his part here is relatively small. Many of the smaller parts are provided by recognizable voices. Jim Varney, who used to play Earnest in all those commercials, and even a few movies, voices Cookie. Sadly, he died during the production. David Ogden Stiers plays a minor role at the beginning. And Don Novello, who used to portray Father Guido Salduc on stage and on Saturday Night Live, voices Vinnie.

Although the filmmakers were clearly anxious to include lots of action and made use of the nascent computer animation industry for much of it, I actually enjoyed the quieter character moments more. The script contains some nice moments of comedy, including the always amusing P.A.. announcements provided by Wilhelmina.

Disney was initially so confidant of this film's success, it planned sequels and an animated spinoff television show. Its failure at the box office cause the cancelation of those future projects. The television show was shutdown in mid-production and the finished footage was hastily cut together into a direct-to-video sequel. It's a pity really, because although it's not a perfect film, it's definitely better and more enjoyable than its box office failure would lead you to believe.