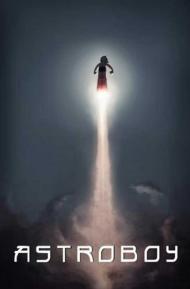 Freddie Highmore voices Astro Boy in the movie of the same name.

Patrick wrote in his Li'l Abner review that as children, only one house in our neighborhood had cable television. At least it was only one house that we knew of. They had kids our age, and I remember watching shows there that we could never see at home, off our antenna television. One of those shows was Astro Boy. Along with Speed Racer it was the first Japanese animation to hit the U.S.A.

Astro Boy is set in a future, in which mankind has become lazy as robots have taken over most of our work. Pollution has made the Earth an ugly place. To get away from the filthy planet, a large segment of land has been raised into the sky, called Metro City. It is an advanced place, populated by mostly intelligent, wealthy folk. Garbage and waste is disposed of by throwing it back down to Earth.

After the death of his son, robotic scientist and Metro City resident, Dr. Tenma creates a look alike robot of his son. He even puts his son's memories into the robot so that he thinks he is a human. He uses a newly discovered energy source to keep him going.

The single father becomes more heart broken by the robots presence than comforted, and decides to get rid of it. Astro Boy ends up on Earth in a wayward home for lost children. There he makes friends and develops his amazing powers. Meanwhile, an election is happening on Metro City in which one candidate, General Stone, wants the energy source from Astro Boy to build a defense weapon.

There is plenty of action as Astro Boy can fly and his hands turn into laser guns at will. As is typical with all Japanese shows, the bad guy turns huge at the end for a big climactic battle. Humor comes from a small band of robots living on Earth that want to start a revolution. They have a poster of Lenin on their wall.

Although this is a family film, Bowers had to include some Socialist propaganda. General Stone is a conservative as only liberals like to see them. He makes comments about how he created tax cuts for some of his friends. His banner says no to change. He calls the other candidate a hippy. He is very pro-war. David Bowers also directed and wrote some of Flushed Away. Both films deal with extreme separation of social wealth. Obviously Bowers has some class envy issues. I am sure that my brothers would write that Kids will not pick up on all of the political stuff, but if that's true, why include them at all? I do not remember any political messages in the television, or maybe it was there and I was too young to notice.