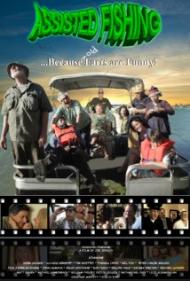 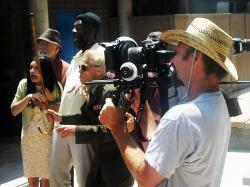 Joe Crouch has worked for over a decade as an electrician and a technician behind the scenes of many famous films and television shows.  With Assisted Fishing, he takes the lead on his own project.  Acting as writer, director and producer, Crouch has come up with a delightfully comedic story with its heart firmly planted in the right place.

Dewey Winfield is an unemployed middle aged loser who lives with his hideous mother in a trailer park.  His arch nemesis since childhood owns his own business, speed boats around with bikini clad girls and sponsors an annual fishing contest that he always wins. When his brother and sister in-law leave town for a week, Dewey takes a job at an assisted living, senior citizen's home, which he dubs, "The Death Camp".  He does it to earn the money to pay for the fishing contest's entrance fee.

The group of seniors have been abused by Dewey's sister in-law, nicknamed "The Dragon Lady."  Dewey's easy going charm is a drastic change for the old coots, and it quickly wins them over, except for Agnes, who keeps a list of infractions to report to the Dragon Lady upon her return.  Dewey and the gray hairs bond when Dewey takes them fishing and, except for one old guy who drowns, they have the time of their lives.

Also in the mix is a woman named Monica, who brings a little boy to the old folk's home in an "Adopt a Senior Citizen" program.  The old folks are scared to death of the boy as every time he adopts a senior citizen, they die soon afterwards.  "He's the Grimm reaper back to steal another soul." one old fart says of him as he enters the community room.

Crouch wrote some funny lines.  When announcing free TV day, Dewey says, "It'd be my greatest joy to see you guys enjoy the few days of life you may have left."  He makes fun of a standard movie line when an old guy says to Dewey, "Follow your heart kid, follow your heart."  and Dewey responds, "That is literally the worst advice ever."    After one of his many ignorant acts, Monica says to Dewey, "I'm not sure what makes you so stupid, but it really works."

Although first and foremost a comedy, Assisted Fishing includes some decent sentimentality.  Dewey comes to like these old folks and one old guy in particular, who may or may not suffer from Alzheimer's.  They of course end up helping Dewey in more ways than one.  Dewey later in the film says, "They taught me how to live life."

Assisted Fishing has plenty going for it but not all the jokes work.   The farts and the stolen ice cream scene are not as funny as they are intended to be.  A couple of setups never get as explored as they could.  Dewey's mother and the lizard with the Eddie Murphy type voice go nowhere.  The mother is in the first scene and should have made another appearance at the end or had her part cut entirely.

Its low budget is often very obvious.   With a price tag of half a million dollars, the sets are limited and the boat fire is clearly not real.  Mayonnaise stands in for bird poop and what is with the glowing green farts?    The real sacrifice this film makes though, is in the casting.

Derek Haugen is adequate as Dewey, but he lacks leading man charm.  He works really well in the ensemble comedy webisodes "Good Cops."  Check them out on YouTube.  As an outdoor slacker with a fondness for going shirtless, Dewey is suited to Matthew McConaughey if a big budget remake was to ever happen.   The actors playing the old folks are all clearly younger than they are pretending to be.  No one in the film is too shy to over act.  Everyone hams it up but the more subtle jokes are the funnier ones.

Assisted Fishing is a family friendly film with a message about belonging somewhere and being needed.  Joe Crouch could certainly have a fine career in film making.  The writing is whimsical and fun even though the story is fairly predictable. This is a good film, but with a larger budget and a veteran cast, this could be a great film. 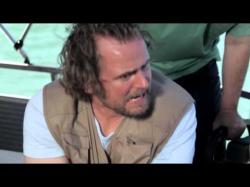 I agree about the casting. Especially in the lead role. Eric mentioned Matthew McConaughey but I could also have seen a young Bill Murray in the part. Either way – and no disrespect intended - Derek Haugen simply lacks the charisma to carry a movie. Although to be fair he's not a bad actor and I'm told he gained weight for this role.

In supporting roles, Paul James Saunders (as Bernie with the deadly gas problem), John Samaha (pulling double duty as Willie and in drag as Mama Bear) and young Peter Vander Meulen (as Billy, the senior killing little boy) are all quite funny.

I also agree the storyline is decent and there are a few chuckle worthy lines. But overall the script could have used another rewrite and a bit more polishing of the dialogue to be ready for the big time.

The setups and the characters are fine and Crouch really makes the most of his limited budget. Technically, the movie looks pretty damn good. He definitely shows more potential as a director than a screenwriter.

Assisted Fishing tries hard to amuse and, as Eric mentioned, it even exhibits a bit of heart. It's not a bad first feature for Joe Crouch as writer/producer/director. Give this man a decent budget, better writers and a cast with a bit more range and appeal and he could go far.