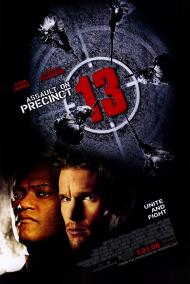 Ethan Hawke in Assault on Precinct 13.

Being that this movie is a remake of the 1976 movie of the same name, which was itself a modernized remake of the 1959 John Wayne western, Rio Bravo (which was remade with Wayne again in 1966 as El Dorado), it's no surprise that it has something of the air of an old school action thriller about it. It's a B-movie certainly, but of the sort that they don't usually make anymore, and it isn't trying to be anything but what it is, which is an entertaining, fast paced movie.

Ethan Hawke stars as Detroit Police Sergeant Roenick in charge of Precinct 13; a police house that is closing for good at midnight on New Years Eve. As fate would have it, a blizzard blows up and a bus carrying several criminals, including Detroit's most notorious mobster Marion Bishop (Fishburne), is forced to take refuge in the understaffed police station until the storm blows over. Also looking to ruin the New Year's festivities is Detective Duvall (Byrne) who is a corrupt cop looking to kill Bishop before he can turn state's evidence against him and his men. After a sneak in assassination attempt fails, Duvall and his team begin an assault on the station with the knowledge that they mustn't let anyone in it survive the night.

While the plot does try to throw in some human drama with a prologue that shows a tragic event in Roenick's life that explains how he ended up in Precinct 13 and also tries to build some sparks between him and the police psychiatrist played by Maria Bello, this is definitely a movie that is all about the action. And it comes fast and furious, sometimes at the expense of plausibility, but remains entertaining despite the gaps in logic that occasionally take place.

Eventually, Roenick is forced to release all of the prisoners so that there will more guns to protect the station. The friction this causes between the criminals and the police officers leaves some doubt to whether there is more danger coming from the outside or the inside, particularly when the drugged-out psychotic character, played by John Leguizamo, is given a gun.

The movie does manage to throw in a few surprises amongst the gunfire. Unlike many movies of this type, none of the characters are safe, not even the big stars. I won't spoil the movie by revealing who lives and who dies, but I will just say, don't become attached to any of them.

Definitely a check your mind at the door action movie, but an entertaining one, and a welcome respite from all of the heavy Oscar contenders and critic's choice movies that are currently filling the theaters.

Laurence Fishburne and Drea de Matteo in Assault on Precinct 13.

Scott gives this movie too much credit. Yes, it is all about the action but the whole thing comes off as sloppy. The dialogue is pathetic. The very best line this movie can muster is when Dennehy says to Leguizamo, "Your eyes are red. You been smokin' crack?" To which Leguizamo replies, "Your eyes are glazed. You been eatin' donuts?

The psychiatrist wearing a short, revealing evening dress in a blizzard during the gun fight was stupid. If she is there for eye candy than an actress with some greater assets should have played the part. The sexiest she gets in bending over in front of Hawke so you can see her boney boobs hanging. If your going to have a hot chick just for the sake of a hot chick then make her as hot as you can. Otherwise rewrite the part to be more realistic.

The best thing about this movie is Hawke and Fishburne. Hawke is proven to be one of the best former child actors (Explorers) now working as an adult. He plays his psychically wounded police officer very straight the entire movie. He is actually too good for this film. The rest of the movie's weaknesses are accentuated by his sincere portrayal. Fishburne has little acting to do in this movie. He doesn't need to act. Fishburne has the most amazing screen presence. He just looks and says his lines in a cool, calm way. Like his role in The Matrix, Fishburne demonstrates that less can definitely be more when it comes to acting.

Assault On Precinct 13 is definitely "B" quality as Scott wrote, but it did not need to be. The writer/s and director should have raised their game to match Hawke's and Fishburne's performances. Also, a cheerier ending would not have hurt.