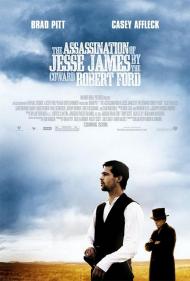 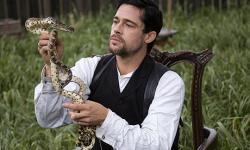 Brad Pitt in the long titled The Assassination of Jesse James by the Coward Robert Ford.

Except for my brother's, I tend to not read other movie reviews of films I am about critique. In the case of The Assassination of Jesse James by the Coward Robert Ford, I was curious to see if other critics saw the same homoerotic overtones. One look at Roger Ebert's review and I find that I am not alone in that opinion.

Ford is a 19 year old star struck kid who wants desperately to join up with the James gang. He has read the dime store novels of Jesse James's exploits and worships him. The opening scene has Ford begging Frank and Jesse to join the gang. At this point, the James Gang's only original members are Frank and Jesse and their careers are winding down.  After one last train robbery, Frank and Jesse part ways, to supposedly lead a life away from crime.

Ford, was allowed to join the gang for that train robbery and befriended Jesse. Ford soon gets arrested for a murder, but the Governor promises him a full pardon if he will kill Jesse James. Now here comes the gay part.

Jesse invites Ford to live with him and his family after he moves them to a new house. One scene has Ford approach Jesse while he is taking a bath and Jesse says to him over his shoulder, "Can't figure it out: do you want to be like me or do you want to be me?" At another point, Jesse gives Ford a nice revolver as a gift for no apparent reason. The most interesting moment is when it is narrated that Jesse spent a night in Ford's bedroom one night, even though his wife was in another bed in the same house. The movie tries to explain that Jesse did it because he did not trust Ford. If he did not trust Ford why go to all the trouble? Why not just kill him and rest his worried head. The movie credits him with a couple dozen murders. What would one more matter? The movie never makes Jesse seem at all gay, but it also never says why he invites this 19 year old infatuated boy to live with him.

No one will ever know what really transpired between the two men, but to me, it is not the movie's most interesting aspect. What gave me to pause was just why Ford was treated so terribly by the public after killing one of our nations most prolific murderers? After the assassination, Ford became instantly famous. He wallowed in it. He did a stage play where he reenacted the killing. He bought a saloon with the reward money. But things changed for him. Soon people started calling him a coward. They sang songs about it. They booed him at his shows. Perhaps it was just that he shot Jesse in the back. Or perhaps it was that Jesse, through newspaper articles and cheap novellas, had provided a population with an interesting anti-hero that had become larger than life. Perhaps it was a slap in the face, that a man so greatly feared, and in private, admired, was killed by a mere boy.

Pitt and Affleck are both decent in their roles but after watching this movie I do not feel that I understand either character any better. Jesse was a contradiction. He killed many men, yet is portrayed here as a loving husband and father. Ford is called a coward, yet according to this movie, lived with Jesse in constant fear for his life. In fact, he lived with Jesse for weeks after the deal is struck with the Governor. Why did he wait so long to kill him?