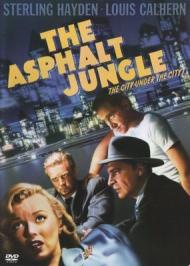 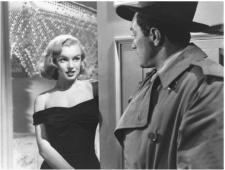 Marilyn Monroe as Angela, in The Asphalt Jungle.

I expected The Asphalt Jungle to be one of those films that is entirely forgettable if not for the presence of Marilyn Monroe. What I found instead, was a great film noire with amazingly rounded characters. Directed by the legendary John Houston, the entire movie takes place at night except for the first and last scenes.

Although he has just been released from prison, Doc Riedenschneider already has plans for his next jewel heist. He makes the rounds collecting a group of criminals to help him out. Among the recruits is Dix, who is the gun toting muscle. Louis is the safe cracker. Emmerich is the money man. They pull off the robbery but things soon turn south and they find themselves at odds and on the lam.

The best thing about this movie is that everyone is flawed and/or burdened by someone or something else. As the Doc says, "One way or another, we all work for our vice." The Doc likes young girls and would have gotten away had he not been distracted by one. Dix is a drinker. His girlfriend Doll is madly in love with him, and will take herself down just to be with him. Louis is a family man having just become a father. Emmerich has gone broke trying to keep his wife happy living in a large home with servants, and his young mistress, Angela, in an nice apartment. There are even more characters, and all seem to be just as desperate as the next.

Marilyn Monroe may very well be remembered for her curves in Some Like it Hot but in The Asphalt Jungle she is very thin. Although she would develop into a decent comediane, most of her early work was in dramas. In 1950 she was a relative unknown but had the great fortune to appear in this and All About Eve in the same year. The Asphalt Jungle was nominated for four Academy Awards, including best director and screenplay. 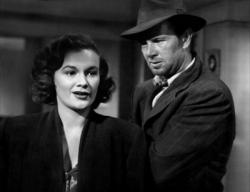 Jean Hagen and Sterling Hayden in The Asphalt Jungle.

The Asphalt Jungle is a gritty, hard-hitting crime-does-not-pay morality movie with a somewhat heavy-handed ending. It moves at a deliberate pace but still manages to entertain more than 6 decades after its release.

Like all classic heist movies the first half is devoted to the gathering of the team of criminals. Where this movie differs is in the actual robbery. It is a very short section of the movie. The second half is all about the aftermath and what happens to each of the men involved. As the dragnet tightens around them we see what each man is made of.

The cast is memorable.

Marilyn Monroe is fairly convincing in her two scenes. She has limited dramatic range but exudes charisma all over the screen. She is having an affair with a much older man whom she calls “Uncle”.

Eric, I’m surprised you didn’t mention Jean Hagen’s role. She is the lead female character and is playing a woman worlds away from her most famous part, that of Lina Lamont in the classic MGM musical Singin’ In the Rain. She is nearly unrecognizable from that part as here she is a brunette and doesn’t use the dumb blonde voice she made so famous in that movie.

The rather wooden Sterling Hayden gets top billing but is out-acted by the rest of the cast. He is probably the most sympathetic of all the bad guys and the movie ends with him.

Louis Calhern is perfect as the outwardly calm, double-dealing, rich guy having an affair with Marilyn Monroe. He played drama and comedy equally well, demonstrating his comedic chops in Duck Soup with the Marx Brothers and later playing Uncle Willie in the musical remake of The Philadelphia Story, High Society.

Sam Jaffe (immortalized as the title character in the 1939 adventure classic Gunga Din) plays my favorite character. He is the mastermind behind the jewel heist and gets his comeuppance in a heartfelt, ironic manner (he shouldn't have stopped to watch that girl dance).

Brad Dexter is also along for the ride as a stone cold killer.

John Huston’s direction holds up well but the script is too talkie, especially in the movies’ weaker first half. Overall though, I agree with you Eric, The Asphalt Jungle is solid 3 star film noir. 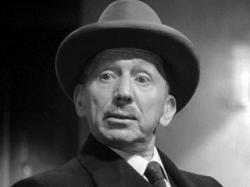 Sam Jaffe in The Asphalt Jungle.

The Hays Production Code, which was still in effect in 1950, definitely played a part in the heavy handed ending of this movie. For most of the story it is the criminals who are the protagonists, while the police are shown to be either corrupt, incompetent or sometimes both. Thanks to the Code's edict that "All criminal action must be punished, and neither the crime nor the criminal can elicit sympathy from the audience", the ending is a foregone conclusion. The criminals are either killed or arrested, while the police are portrayed as the thin blue line between civilization and the wildlife living in the asphalt jungle.

As Patrick mentioned, the pacing is very deliberate, which is a nice way of saying that it's rather slow, particularly in the beginning. It does build a head of steam once the heist begins and I agree that the second half is quite tense and well done.

The action is kept lowkey and realistic, something that is enhanced by the fact that there is no incidental music in the movie. It opens with music and ends with some, but features none during the story.

Marilyn is less voluptuous than she would become, but she's still gorgeous and sultry as hell. Her performance is pretty weak, but as Patrick said, she packed plenty of charisma. Although the ending is hampered by the Production Code, her relationship with her "uncle" does press the boundaries of it as it's clear he's not keeping her around for her conversation.

I also agree with Patrick about Sam Jaffe. He was my favorite character as well. The character of Dix should have been the most sympathetic and he almost is, but Sterling Hayden is far too stiff of an actor to fully flesh out the part. A more talented actor could have done more with the part.

Despite a few minor flaws, this is still a tense and entertaining heist film. Rather than overshadow the story, Marilyn's appearance is only a minor footnote in it.