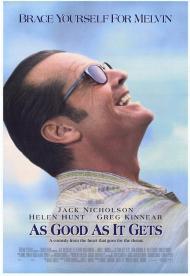 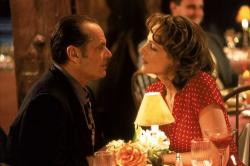 Jack Nicholson and Helen Hunt in As Good as it Gets.

Jack Nicholson was 60 years old when he played Melvin Udall, which is a little too old for the character he's playing, especially when you consider that his co-star and romantic love interest, Helen Hunt as Carol the waitress, was just 34. And yet, who could have played him better? Who could have taken this racist, sexist, homophobic, and extremely selfish man (in the very first scene he pushes the cutest dog you'll ever see down a garbage chute) and make the audience root for him to have a happy ending –and win the Academy Award for the feat—except for Jack?

The plot isn't original. It's comparable in many ways to Dickens' A Christmas Carol, only with a little dog, a gay neighbor, a waitress and some Prozac in place of ghosts, with Melvin, an obsessive compulsive writer living in Manhattan, in the part of Scrooge. In less talented hands this might have been just another run of the mill Hollywood romantic comedy, but Nicholson and Hunt (who also won the Oscar for her role), along with a never better Greg Kinnear as Simon the gay neighbor, are each terrific and the script gives them some fantastic and memorable dialogue. It's because of them that it doesn't really matter if the outcome of the story is obvious from the start.

Nicholson as Melvin gets away with some terrifically politically incorrect lines. He manages to deliver them in a way that makes you laugh at the sheer rudeness of them, without alienating the audience. When asked how he writes female characters, Melvin responds, “I think of a man, and I take away reason and accountability.” A line that is actually attributed to real life author John Updike. He doesn't reserve his caustic tongue for just women though, but gays, “I can't do this without you. I'm afraid he might pull the stiff one-eye on me. ” Hispanics, “Where do they teach you to talk like this? In some Panama City 'Sailor wanna hump-hump' bar, or is it getaway day and your last shot at his whiskey? Sell crazy someplace else, we're all stocked up here.” Jewish people, “How much more you got to eat? Appetites aren't as big as your noses, huh?” And pretty much everyone else he comes into contact with.

Not all of his lines are rude. There are a few serious remarks, although often told in a humorous manner, that remain quotable as well, including the title, but also these. “Good times. Noodle salad.” “I'm drowning here and you're describing the water.” “You make me want to be a better man.” And one of my favorites, “How can you diagnose someone as an obsessive compulsive disorder, and then act like I have some choice about barging in here?”

Despite the great performances and smart script, the movie is not without its weaknesses. At two and a quarter hours, it is quite long, particularly for the genre. Certainly, there is room for some tightening and trimming. Nicholson and Hunt, while both brilliant independently, don't really share a terrific romantic chemistry and this is in part because of the age difference. In one scene Carol says that she thought Melvin was handsome and almost reveals that she thought he was sexy, but her actions never reinforce these statements. Except for his money, it's difficult to see what Carol truly sees in him. And the ending, while as happy as you'd expect from a Hollywood romantic comedy, doesn't exactly fill you with confidence that their relationship will last.

Those are just minor details however, as the real joy is watching Jack being Jack. He's made 7 movies since this one, but this was his last truly great part. No one could have played it like him and he's the best reason to watch or rewatch this one. His performance is (I can't resist) as good as it gets. 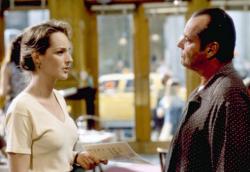 Helen Hunt and Jack Nicholson in As Good as it Gets

The reason Jack Nicholson can get away with playing a racist, sexist, homophobic, and extremely selfish man and still be a sympathetic character is because he is 60 years old.  Think of Archie Bunker or Clint Eastwood in Gran Torino.  Their age allows them to be rude without being too threatening.   A younger bigot would seem more irrational and dangerous.

Melvin Udall has a compulsive disorder.  He cannot step on cracks in the pavement.  He is a germaphobic.  There is much to be annoyed by him. It is a true testament to Jack Nicholson's charm that we care at all about Udall.  He is the best thing about the film.

Helen Hunt plays the Hollywoodized single mom.   She works as a waitress.  Her son has all kinds of medical issues.  A date is put off by her son's vomit and decides to not see her again.  We are expected to feel sorry for her from start to finish.   Although the collective American middle class cheered when Carol Connelly screams, "Fucking H.M.O. bastard pieces of shit!"  It felt forced.  As a single mother who works on tips she would be eligible for all kinds of government assistance, including Medicaid.

Simon Bishop is likewise someone we are supposed to pity.  His parents kicked him out.  He gets beat and robbed.  He gets kicked out of his very nice apartment.  Of the three characters, I never felt as if I got to know him that well.  He is simply a gay artist.  Or as Melvin puts it when making introductions, "Carol the waitress, Simon the fag."

As Scott wrote As Good as it Gets is loaded with great lines, and many are politically incorrect.  My personal favorite is when Carol says to Melvin, "When you first entered the restaurant, I thought you were handsome... and then, of course, you spoke."   Helen Hunt and Jack Nicholson deserved their Oscars.  Writers James L. Brooks and Mark Andrus deserved one as well but had to settle with a nomination. 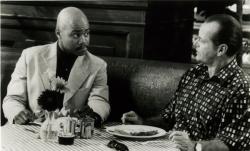 Cuba Gooding Jr. and Jack Nicholson in As Good as It Gets.

Nicholson, Hunt and a clever script make this a memorable movie. I agree that the romance between the older, self-absorbed, neurotic, OCD writer and the kindhearted, single-mother, tough-cookie, waitress never really works. The story is about Melvin's growth as a human being and it would have worked just as well with them just being friends.

Greg Kinnear does fine work as the gay neighbor Simon (there's always a gay neighbor). Although the overly dramatic manner in which his storyline is handled seems dated now. The woe-is-me homosexual as victim, rejected by his parents, is now a worn out cliché.

I wanted to know more about Cuba Gooding's character, Frank Sachs, Simon's agent. He plays a key role at the beginning of the movie but once the other three characters head out on that road trip to Baltimore he abruptly disappears from the story. I love the scene where he intimidates Melvin in the hallway of his apartment building. “I grew up in hell! My grandmother has more attitude than you!”

One scene that never rings true for me is the moment where Carol runs through the rain to Melvin's apartment to tell him she will never sleep with him as repayment for providing great medical care for her sick son Spencer. The script never fully explains her urgency.

Eric, I disagree that the problems of this single mother with the sick kid seem forced. Of course she is on Medicaid or some other form of government assistance. The movie never says her son is without any medical care before Melvin steps in. However, the quality of that care is where the big difference lies. Do you really think an overworked doctor at some crowded clinic is going to give a patient the same level of care that a high paid private physician will?

Both my brothers mentioned their favorite Melvin quotes from this wonderfully witty script. Here's mine. “People who talk in metaphors oughta shampoo my crotch.” 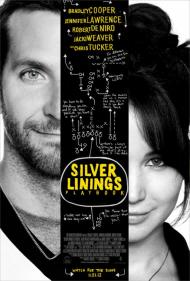