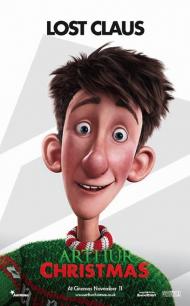 Arthur Christmas takes the elements of the traditional Christmas story of Santa Claus and turns it on its head, with a science fiction twist. It pays homage to the tried and true Night Before Christmas tale while updating it to a world of technology not usually associated with jolly old St Nick. With a very British sense of humor, Arthur Christmas contains some slightly dark moments that skewer the legend of Santa Claus.

Other than the mailing of a letter to Santa Claus, by a little girl asking for a bicycle, the entire film takes place on Christmas Eve. The current Santa Claus is a descendent of many generations of Claus gift givers. His father is still alive living with him, Mrs Claus and their two sons, Steve and Arthur.

Times have changed. Santa now travels in a huge ship called the "S1. " It is larger than an entire country village. It is manned by an army of elves who descend onto the town and place gifts under trees. Santa himself only places one present under one tree in each town as an act of ceremony. Santa is portrayed here as a moronic boob. He does and knows very little.

The "S1" is directed, with military precision, by command central, located at the North Pole. It is a vast complex also manned by elves and run by Steve, who wants to be the next Santa. Meanwhile, Arthur is more interested in the human side of Christmas. He works in the letters to Santa department. He is touched by the children's requests for presents.

A problem arises when the "S1" returns from delivering presents in the early morning hours and it is discovered that a present was mistakenly not delivered. Santa and Steve act indifferent to one single present being lost. Hey, they delivered a billion presents. How could one really matter? Arthur cannot live with the idea that a child will wake up and find that Santa forgot her.

Arthur teams up with his grandpa, Grandsanta, and they go old school. They hitch up the old sleigh and reindeer. With a stowaway elf, from wrapping, "There's always time for a bow." they set out with the intention of delivering the bicycle before sunrise. Grandsanta gets them lost. They end up traveling all over the world, losing reindeer at every turn.

Arthur Christmas has its heart in the right place. Arthur is the moral compass that all around him must learn to steer by. His dad is merely going through the motions of Christmas. His brother Steve is just working to get the Santa promotion. Even Grandsanta is just after one last hurrah in the sleigh. Arthur knows what the holiday means to children and is the only one left with the giving spirit of Christmas.

There are plenty of jokes here, and if you enjoy the British sense of humor, you will like it all the more. Not every joke works, such as the stop over on the Serengeti. It was a bit disheartening to see Santa Claus's lazy approach to gift delivery. The most shocking moment comes when Santa's sleigh gets blown up. As long as you are not bothered by Arthur Christmas rewriting the Santa Claus legend, you will find a movie worth spending the Holidays with.

I wouldn't say Arthur Christmas turns the Santa Claus legend on its head as much as I would say that it drags the trappings of the legend into the 21st century and then shows that at its heart Christmas hasn't really changed all that much after all. It's a delightfully funny Christmas tale with plenty of jokes for young and old alike.

The film was produced by Aardman animation, the company behind Wallace and Gromit and Chicken Run, and Pirates! Band of Misfits. Unlike those other films, this one is more "traditionally" animated. It's rather ironic that Aardman chose to not make this movie stop motion animation because the humor and the way the script slightly tweaks an existing holiday tale reminded me a little of those old Rankin/Bass holiday television specials. If they'd made it stop motion as those specials did, the resemblance would have been even more marked. In any case, the animation is nicely done and distinctly festive, especially in HD clarity.

Bill Nighy gets many of the film's funniest lines as the decidedly old school Grandsanta. His tales of hardship from Christmas's past get more exaggerated as the film goes on, such as, 'Christmas 1923, I had a heart attack at the reigns. Left ventricle popped out my mouth, pushed it back down and carried on." and "The last time I took Eve [the sleigh] out on a spin. I didn't know it was the Cuban missile crisis. I nearly started world war 3!"

The other scene stealer is Ashley Jensen as Bryony the gift wrapping elf. Her eternal optimism and ability to wrap anything with just three slaps of sticky tape (Three!!), brighten the movie. And the moments when Grandsanta and Bryony interact are the funniest moments of all, such as when Grandsanta tells her to wrap her head.

For a Christmas movie to become a perennial favorite, it needs more than just humor, it also needs heart. The message of this movie is rather commercial, but then isn't Christmas really? Although it's not just about getting a little girl a present, it's also about family.

Despite critical praise, Arthur Christmas wasn't a success at the box office.  I suspect however that it will have a long life in digital format. It's just too damn entertaining to never find an audience.

Actually Arthur Christmas does more than just turn the Santa Claus legend on its head or drag its trappings into the 21st Century - although I think both my brothers are correct in their assessments. Arthur Christmas does those things but it also gives us a brief history of the Santa Claus monarchy dating back 15 centuries. Contrary to popular belief, Santa Claus isn't an immortal fairy but rather a mortal -albeit long lived- descendant of the original St. Nick. Traditionally each Santa performs his festive duties for 70 December 24ths before passing on the responsibility to his heir. A sense of history plays a huge role in the story. In addition to Grandsanta's tales of long ago Christmas adventures we also learn that Christmas Eve of 1816 was a particularly bad time for the Claus dynasty.

The animation is gorgeous and the script funny. This is best exemplified in the scenes of Arthur and Grandsanta riding in the old sleigh against the starry night sky. The enchanting visuals juxtaposed with some surprisingly adult humor makes for an original holiday motion picture. Grandsanta gets the funniest lines, “They used to say that it was impossible to teach women to read!” but the jokes do get spread around among the entire cast. When Arthur acts upset because a child's present wasn't delivered, his clueless brother Steve remonstrates him with, “Arthur! Christmas is not a time for emotion!”

As Eric said, the humor is very British. I will go as far as saying the perspective of the entire story is very Anglocentric. The heart of the movie centers on Arthur's quest to ensure that the little English girl Gwen awakens to find a present from Santa under her tree on Christmas morning. That is the goal of the entire story. It culminates with the magical moment when she spots Arthur -as Santa- for a fleeting instant in front of her house. We are witness to a heartwarming childhood memory that Gwen will cherish for as long as she lives.

Compare that to the treatment the little Mexican boy Pedro receives. He experiences a traumatic interaction with Steve (whom he believes to be Santa Claus) in which Santa takes back a present and then actually gets in a fight with the small child over it. The entire scene is played for laughs and there is no happy resolution to it. Now I only mention this because the entire theme of the movie is about the nearly sacred importance of each and every child's Christmas morning experience.

Lest I give the wrong impression let me assure the reader that I did enjoy Arthur Christmas. It's fast paced and clever, and the cast does terrific voice work. I agree that Arthur Christmas has heart but it works best as a rowdy Christmas action/comedy.