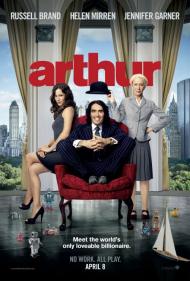 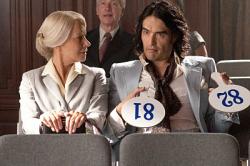 As a huge fan of the original Arthur, I was not looking forward to seeing this remake.  Russell Brand?  As True Grit proved though, sometimes a new version can be just as good.  My fingers were crossed.

The plot follows the original fairly closely.  Arthur is the son of a very wealthy family.  He does nothing all day but play, drink, party, shop and drink some more.  The film has one plot improvement over the first one.  Dudley Moore's Arthur was simply an embarrassment to his family.  Brand's Arthur actually causes investors to not want to do business with the Bachs as they see him as a liability to the future of the business.

Arthur's mother insists Arthur marry the wealthy Suzanne to calm him down.  He meanwhile meets and falls in love with Naomi, a New York tour guide.  Arthur must decide if he will marry Suzanne and keep his inheritance or marry Naomi and be poor.

Brand has his own charms and sense of humor but by no means do I believe he was born and raised as the son of New York billionaires.  His long hair and complete ignorance of all things relevant are cute but hardly the make up of someone raised with such opportunities.  Moore's Arthur loved to party but was not a moron.  When sober he could have an intelligent conversation.  Brand was always "on".  I never knew when he was sober or drunk.

Gerwig is likewise charming and cute.  However, she lacks the chutzpah that Liza Minneli brought to the role.  When the police try to put a stop to he illegal tours, she smiles and lies.  When Minneli gets caught shoplifting she turns into an obnoxious caricature, yelling and playing the victim.  She and Moore may not be as good looking as Brand and Gerwig, but they have far more talent.

Not only do the two leads not compare to the original, but this film lacks the original's funniest moment and most dramatic line.   In the original, Moore goes to visit Minneli but gets the wrong address, with hilarious results.  The scene is nonexistent here.  This version has far less laughs.

When Hobson (Gielgud) visits Minneli he delivers the line that won him the Oscar, "This is not a tie you can steal!"  Many lines are reprised but not that one.

As Hobson, John Gielgud's sarcastic lines were masterfully delivered.  Mirren, as talented as she is, does not fare as well.  She has one scene where she tells Arthur a story of her past.  It ads a snippet to her life but also makes her a sad character.  This is a comedy.

The last annoying nail in this remake coffin is the political correctness.  The original Arthur was, is and always will be a drunk.   Brand's Arthur goes to rehab.  This insults the character.  The original Arthur drank because he was having a great time enjoying his freedom and life.  This Arthur has to grow and better himself.  Likewise Minneli stayed poor in the original, Gerwig becomes an author.  I guess crossing your fingers does not help.

A final note;  the music to the classic theme song from the original Arthur can be heard during the Grand Central Station date scene. 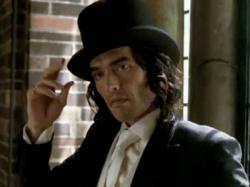 Russell Brand has his charms, but he's not a patch on Dudley Moore in Arthur.

By comparison to the original Arthur, there is no comparison. The original is better in every single way. I don't even see the minor plot point that you mention Eric as an improvement, simply a clarification. However, I do have to say, while still pointless given how brilliant the original was, that on its own, objectively, I didn't hate this remake the way I thought I would.

Like you Eric, I agree the Brand's Arthur comes across as stupid and not just a drunk. He's occasionally funny and he has his charms, but seriously sometimes he comes across as mentally handicapped. I think part of the problem is that Brand, while gifted with comic timing, just doesn't have the dramatic acting ability to give the character depth. The closest he comes to delivering an effective serious moment is when he tells Naomi that his mum died, in reference to Hobson.

Helen Mirren, on the other hand, is more than blessed with acting ability, but she and Brand never quite make the connection that Moore and Gielgud did. One of the most moving moments in the original is when Gielgud tells Moore, "You're a good son, Arthur." I never felt the same depth of emotion here. Maybe it has something to do with the difference between a son seeking his father's approval as in the original and a son seeking his mother's love as in this remake.

I also agree with you Eric that the rehab scenes are a real comedy killer. A drunk having a hell of a good time, falling out of a cab and just generally behaving inappropriately, is funny, but once you label him an alcoholic and admit to his drinking being a problem, how do you ever laugh at him in quite the same way again? An alcoholic with an addiction isn't funny.

There are several references to the original movie. You mentioned the use of "Arthur's Theme", Eric. Naomi tells Arthur at one point that she and Hobson go shoplifting together at Bergdorf's, which is where Liza's character was caught stealing a tie in the original. And St. Barts, the church where Arthur almost marries Susan here, is the same church Moore's Arthur almost married his Susan.

While there are some okay things about this version, I still say they shouldn't have bothered. The original was so well done and is so funny, that there was never a need to remake it at all. It's like looking at someone's copy of the Mona Lisa. No matter how good the copy, it's never going to be the Mona Lisa. Trust me, if you get caught between the moon and New York City, the best that you can do is watch the original. It's not crazy, but it's true. 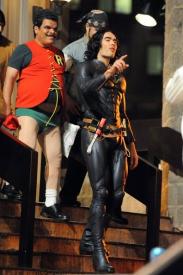 Russell Brand and Luis Guzman as Arthur and Bitterman dressed up as Batman and Robin in Arthur.

Brand and Mirren both fare well. They have decent chemistry together and changing Hobson from a manservant to a nanny works better than I expected. Gerwig is very bland as Naomi and Garner too aggressively over-the-top as Susan. Nick Nolte is OK as Burt Johnson and Luis Guzman gets a few good scenes as Bitterman the chauffer. Missing completely is the feisty old woman played so memorably by Geraldine Fitzgerald, “Don’t screw with me Burt!”

I disagree that Brand’s Arthur isn’t believable as the son of New York billionaires (actually he stands to inherit 950 million dollars which is only 200 million more than in the original movie. With 30 years of inflation that makes him poorer than Dudley Moore’s Arthur). He is childish and lacks any sense of proportion or responsibility but he isn’t stupid or lacking in knowledge about the finer things in life. During their date at Grand Central Terminal he suggests they fly to Italy. “I'm talking about Tuscany! White truffle gelato! Have you ever tried white truffle gelato? It makes all other gelato taste like shit.” Later he tells Bitterman to… “Say something incongruous or pithy.” Not words in your average morons vocabulary.

But I have to concur that the PC attitude towards Arthur’s drinking ruins the movie. This is a fantasy after all. And anyway many adolescents (which Arthur is perpetually) drink to excess and have fun doing it without any serious repercussions to the rest of their adult lives. It would make sense that once Arthur falls in love with Naomi and gains some self respect that he would naturally drink less, without any need to include the laughs killing Alcoholics Anonymous meetings scenes.  And some of the funniest lines from the first movie made fun of Arthur's drinking, like when Burt tells him that alcohol affects your ability to make decisions and Arthur replies, "I don't know about that, I can't make up my mind."

This Arthur isn’t as bad as I thought it would be but it adds nothing to the original and is therefore superfluous. 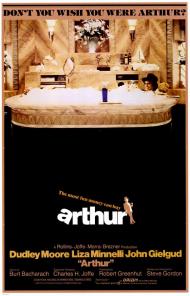